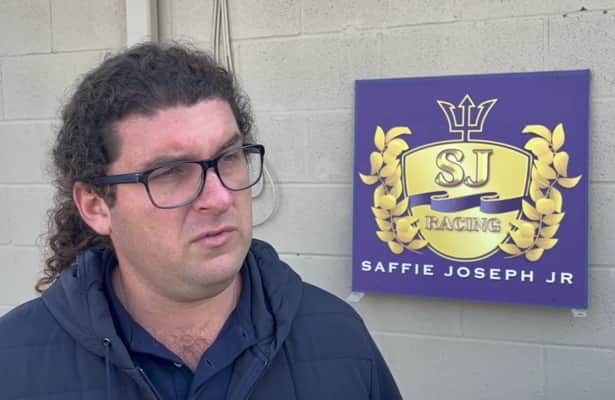 Saffie Joseph Jr. knew Monday there was something wrong with one of his fillies at Churchill Downs.

“We just weren’t happy with how the horse was,” he said. “Just to be precautionary, we sent her to a clinic Monday. At first we weren’t sure if it was a pelvic injury or what it could be.”

It turned out, instead, to be a case of the equine herpesvirus. Before test results confirmed it late Tuesday, Joseph’s barn at Churchill Downs was quarantined. Thirteen other horses, including five of his, were effectively locked down.

The ripple effect led to an ever-widening ban on horses shipping from Churchill to tracks across North America until an all-clear is announced. That may not be for another two weeks.

“That’s something we’ve got to deal with,” Joseph told Horse Racing Nation in a telephone interview from Gulfstream Park, where he won the training title for the track’s 2021-22 winter-spring meet. “There’s nothing we can do. We can’t run from it. We’ve got to deal with it.”

Joseph did not identify the filly publicly, saying he had not received permission from her owner.

Churchill Downs Inc. equine medical director Dr. Will Farmer said this horse who started the ongoing chain of events was taken Tuesday to the Rood & Riddle Equine Hospital in Lexington, Ky., a little more than an hour’s drive from Churchill Downs. Joseph reported the filly was doing as well as could be expected.

“She looks like she’s going to be fine,” Joseph said. “It’s a wait-and-see approach until everybody’s clear. It’s like having the COVID virus. Obviously, this is a different virus, and it’s different for horses with the contamination. For some horses, they can experience it differently.”

Both Joseph and Farmer were on the same page saying that as long as the 13 horses exposed to the virus tested negative, they would have to wait another two weeks to make sure they were completely clear. Joseph said if all goes well, the same thing could apply to his filly.

“She’s going to stay at the clinic until she gets perfectly better,” Joseph said. “Once she get’s perfectly better, we’ll release her to a farm when she’s cleared and can’t spread it to any of the horses. That process probably takes another couple of weeks.”

In addition to the five horses he has in quarantine in Kentucky, Joseph said four others from his stable were being shipped to Florida when his filly was diagnosed.

“Once we realized that it could be questionable, we delayed that van,” Joseph said. “Those horses that we had on the way down we just sent automatically to quarantine at the next clinic just to be safe.”

Joseph, 35, a native of Barbados, is in his 12th year training in the U.S. He said this was all new to him.

“It’s definitely shocking, because you’ve never been in that experience,” he said. “You’re just going to be making sure that you don’t spread it any more and making sure all the other horses are safe.”