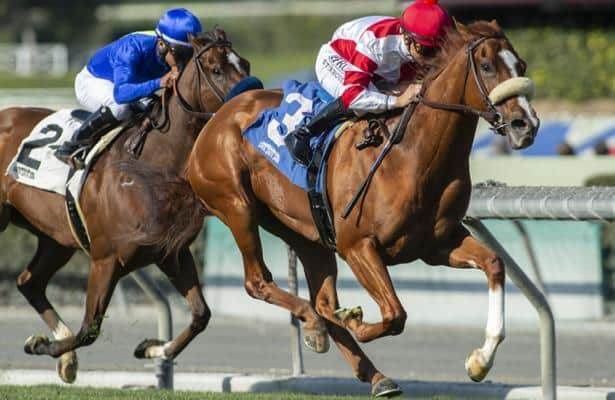 Omaha Beach's connections have another good one.

Bet to favoritism in her U.S. debut, Brazilian-bred Jolie Olimpica was equal to the challenge as she tracked the early leader and went on to an impressive 1 ¼ length victory in Saturday’s Grade 3, $100,000 Las Cienegas Stakes at Santa Anita Park.

Ridden by Mike Smith and trained by Richard Mandella, the 4-year-old daughter of Drosselmeyer got 5 ½ furlongs on turf in 1:01 flat — a new track record for Santa Anita’s recently adopted turf sprint distance.

“I just listened to what Mr. Mandella told me this morning,” said Smith, who made the lead just inside the sixteenth pole. “He said ‘She trains like she’s really quick, maybe a little too quick, so be still leaving there. If she puts you (up on the pace) fine, if not give her a chance to settle and she should finish.’

“I was happy to be on a Drosselmeyer.  I was blessed enough to win the Belmont (2010) and the Breeders’ Cup Classic (2011) on him and this is his first offspring I’ve gotten a chance to ride…The best part of the race was running underneath the wire to be honest with you. She galloped out well within herself and she wasn’t winded at all. She should get a mile for sure any day.”

Owned by Rick Porter’s Fox Hill Farms, Inc., Jolie Olimpica had been idle since winning a Group I stakes on June 9 in Brazil and was off as the 6-5 favorite in a field of five older fillies and mares, returning $4.40, $4.00 and $2.20.

“She adapted quicker than most South American imports," said Gary Mandella, Richard's son, who saddled Jolie Olimpica. "A couple of the really good horses dad’s had over the years took a while to adjust. She was quicker than they were.

“We didn’t necessarily expect her to break that fast, because if you watch her replays in South America, she didn’t always just leave there super-quick. He wasn’t sure if she’d get outrun a little the first part or if she’d do what she did. You don’t know until you put them out there.

“She had a perfect trip. Mike did a great job with her. She was a little upset in the paddock, but Mike got her calmed down in the post parade. He had her in the right frame of mind to break well. Give all the credit to Mike on that. The track record? We’ll take it.”

Kentan Road, who showed the way to the sixteenth pole, finished 2 ¼ lengths clear of Storm the Hill for second money with Jorge Velez up and paid $5.40 and $3.00 while off at 5-1.

Storm the Hill, a Grade 3 winner who was shortening up out of five consecutive turf routes, never threatened for the top two placings and finished third by 1 ½ lengths over An Eddie Surprise. Ridden by Flavien Prat, Storm the Hill was the second choice at 3-2 and paid $2.10 to show.