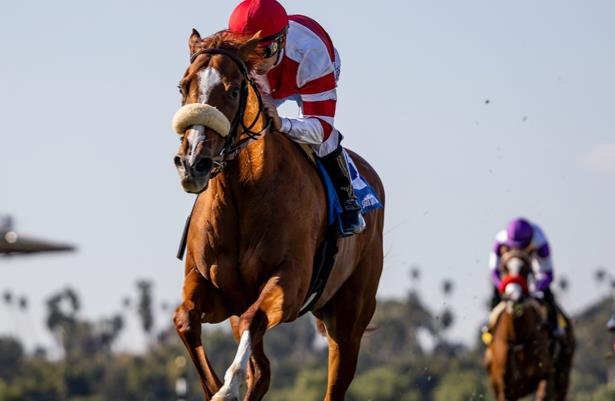 Brilliant Brazilian-bred Jolie Olimpica gets back to sprinting and looms large amongst a field of eight fillies and mares 3 and up going 5 ½ furlongs on turf in Monday’s Grade 2, $200,000 Monrovia Stakes at Santa Anita Park.

Trained by Richard Mandella, Jolie Olimpica faces a solid group of distaffers, including Neil Drysdale’s Australian-bred Oleksandra, who’s been idle since taking a Grade 3 turf sprint at Keeneland on Oct. 11 and Peter Miller’s Surrender Now, who was off the board against males in the Grade 3 San Simeon over the course on March 21.

The Monrovia, Race 5 of 11 at approximately 5:30 p.m. ET, goes on a Memorial Day card featuring the Shoemaker Mile (G1) and Gamely Stakes (G1), also both run on the turf.

Second, beaten a half length as the 3-5 favorite in the Grade 2 Buena Vista Stakes at a mile Feb. 22, Jolie Olimpica, who made all the early running while tasting defeat for the first time, gets back to a much better distance on Monday as she seeks her fourth Group or Graded win and her fifth from six overall starts. A dazzling 1 ¼-length winner of the Grade 3 Las Cienegas Stakes in her U.S. debut two starts back on Jan. 11, she’ll be ridden for the third straight time by Mike Smith, who guided her sire Drosselmeyer to victory in the 2010 Belmont Stakes.

With a long series of drills on Santa Anita’s inner training track, look for this 6-year-old mare to fire a big shot off the bench with Joel Rosario up.  A winner of two out of her last three starts, she’s 4-for-5 with Rosario and will hope to notch her third win from four Santa Anita turf tries. Winless in her first three starts as a sophomore in Australia, Oleksandra is 13: 6-2-3 overall.

In her first-ever try against males in the March 21 San Simeon at 5 ½ furlongs on turf, this 5-year-old mare by Morning Line sped to the early lead but tired late to be beaten 4 ¾ lengths at odds of 8-1. An ungraded stakes winner sprinting on dirt in her second start at age 2, she has three wins, two seconds and one third from eight tries at 5 ½ furlongs on turf.  Based with Miller at San Luis Rey Downs Training Center, she’ll be reunited with Drayden Van Dyke, who is 2-for-3 with her but hasn’t been aboard in her last four starts, three of which were in Kentucky.  With an overall mark of 13: 5-2-1, she’ll be seeking her first graded stakes win.