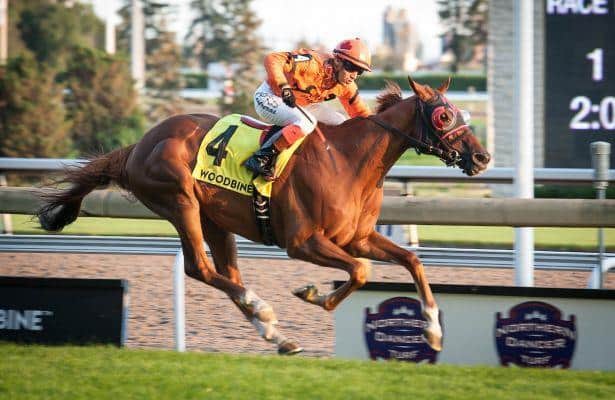 Johnny Bear’s last win came one year ago, but the Ashlee Brnjas trainee made a big return to the winner’s circle Saturday with a repeat in the Grade 1, $300,000 Northern Dancer Turf Stakes at Woodbine.

Hawkbill, who was second last year, tried to go gate-to-wire but faded and finished out of the money.

“It is unbelievable,” Colebrook Stables’ John Brnjas said of Johnny Bear’s win. “He’s quite a horse. I wish I had a barn full of them.”

While Godolphin’s Hawkbill was pressured by Tiz a Slam nearly the entire 1 ½ miles over the E.P. Taylor Turf Couse, local hero Johnny Bear sat mid-pack under Luis Contreras. Hawkbill and Tiz a Slam continued to fight each other as they prepared to turn for home. Meanwhile, Contreras took Johnny Bear up the rail and held on to win at 16-1.

“He was very good in the post parade. He didn’t break a sweat,” Contreras said. “He was nice and relaxed, and I could feel some power underneath. He was listening to me at every point of the race. If I took a little bit of a hold, he came back to me.

“It was a perfect trip. I saved all the ground, so nice and relaxed behind the speed, and I was just waiting for my moment. This was one of my best trips around the track. Turning for home, my first thought was to go the outside but at the last second, I changed my mind and I didn’t see anybody coming on the rail. I saw the rail was a little bit open and he just went through like a knife through butter.”

“He got harried by the other horse the whole race,” Spencer said. “It ruined his race and mine.”

Mekhtaal, English Illusion and Markitoff rallied to finish behind Johnny Bear. Hawkbill was eighth. The final time was 2:25.74.