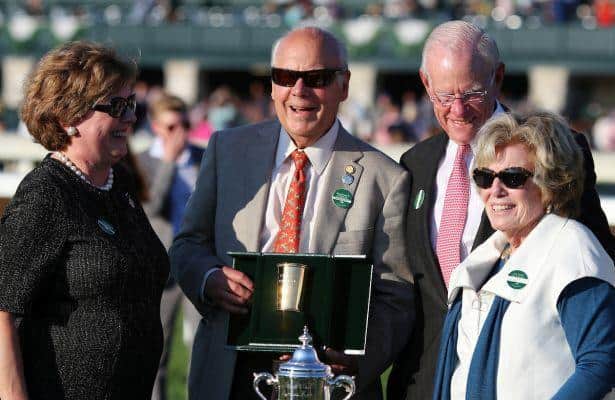 The Grayson-Jockey Club Research Foundation announced today that John C. “Jack” Oxley, a longtime Thoroughbred owner and supporter of Grayson, will be presented with the Dinny Phipps Award at a celebration of The Jockey Club’s 125th anniversary in New York City on Thursday, June 6.

Earle Mack, an active participant in Thoroughbred racing and breeding for more than five decades, created the award in 2017 in memory of Phipps to honor an individual or individuals who have demonstrated dedication to equine health. Previous winners of the Dinny Phipps Award are the Phipps family and Frank Stronach.

“Jack’s dedication to equine health and wellness epitomizes the spirit of the Dinny Phipps Award, and I am pleased to bestow this honor on such a deserving individual,” said Mack.

“We are incredibly grateful for Jack’s support of Grayson and equine research,” said Dell Hancock, chairman of Grayson. “From his generous pledges to his participation on our board of directors, he is an inspiration to all of us who are committed to horses.”

As a Thoroughbred owner, Oxley has campaigned top horses such as Kentucky Derby winner Monarchos, Classic Empire, Noble Bird, Spring in the Air, La Coronel, Sky Mesa, and Beautiful Pleasure. Over the years, he has pledged percentages of his horses’ racing earnings to Grayson. A member of Grayson’s board of directors, he created the Oxley Challenge in 2004, by which the Oxley foundation pledged to donate $1 million to Grayson over four years contingent on Grayson’s raising an equal amount of funds.

“I’m very flattered and humbled to receive this award,” said Oxley. “I’m extremely honored because Dinny Phipps was a great friend, and I think he did more for racing and Grayson than any other man in the sport.”

Grayson-Jockey Club Research Foundation is traditionally the nation's leading source of private funding for equine medical research that benefits all breeds of horses. The foundation has provided $26 million to fund 358 projects at 43 universities since 1983. Additional information about the foundation is available at grayson-jockeyclub.org.

Shifman: What the top Derby contenders have in common
Media members voted Essential Quality and Greatest...