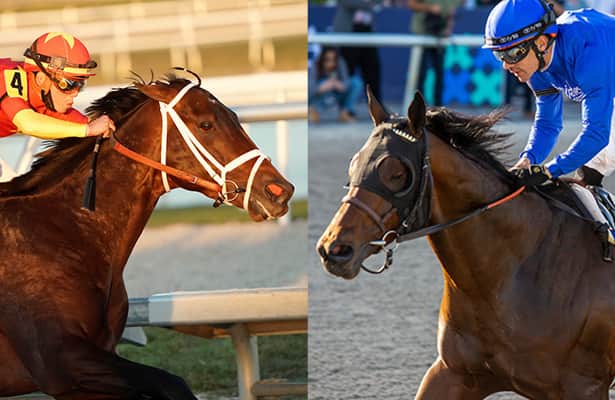 Life Is Good and Speaker’s Corner, two of the top-rated horses from the older male division, headline the Grade 2 $250,000 John A. Nerud Stakes, which will be run on Saturday at Belmont Park going seven furlongs.

In the most recent NTRA Top Thoroughbred Poll, Life Is Good is ranked third and Speaker’s Corner is tied for ninth. Both of them lost their most recent race after winning three in a row. Life Is Good was fourth in the Dubai World Cup (G1) most recently after winning the Pegasus World Cup (G1) and the Breeders Cup Dirt Mile. Speaker’s Corner ran into Flightline in the Met Mile (G1) but won the Carter Handicap (G1) and the Gulfstream Park Mile (G2).

Here is a full-field analysis for the John A. Nerud, which was previously known as the Belmont Sprint Championship, with the odds from the Horse Racing Nation staff. The race is carded as the fourth of 10.

The 10-furlong distance was too much for Life Is Good, and he finished fourth in field of 10 after setting the pace. Yet in two starts this year the son of Into Mischief has earned $2.3 million. Before going to Meydan, Life is Good was just a neck away from being unbeaten in his first seven starts. That loss to champion Jackie’s Warrior at Saratoga came following a five-month layoff. The seven-furlong distance of the Nerud could be ideal for Life Is Good’s return to the races. He was a heavy favorite in every race that had wagering during his career. Top choice.

2. Repo Rocks (12-1 – Tapiture – Gregory DiPrima / Javier Castellano – 25: 4-5-5 - $342,971) Repo Rocks ran six times this year with one victory in an allowance race in April and a fourth-place in the Runhappy (G3) in May at Belmont Park. In the winter at Aqueduct, he finished second in the Toboggan (G3) and third in the Tom Fool (G3). Repo Rocks prefers to run from a stalking position. Use underneath.

3. Harvard (20-1 – Pioneerof the Nile – Rodolphe Brisset / Kendrick Carmouche – 8: 2-3-0 - $135,608) Harvard is an allowance-level horse from the barn of Rodolphe Brisset. Last year, he broke his maiden at Indiana and then won an allowance at Churchill Downs. That led to a fourth in the Curlin at Saratoga. Harvard has yet to regain his form this year after three starts. Toss.

4. War Tocsin (15-1 – Violence – Uriah St. Lewis / Dexter Haddock – 41: 3-8-5 - $334,463) War Tocsin has not won a race since April 2021 but to his credit, the 6-year-old has a trio of top-three finishes in graded-stakes races this year. Veteran trainer Uriah St. Lewis has pulled a couple of big upsets in NYRA stakes after shipping up from Parx Racing. He has a chance to get into the trifecta on this occasion. Use underneath.

5. Speaker’s Corner (3-2 – Street Sense – Bill Mott / Jose Ortiz– 10: 6-1-2 - $672,130) Speaker’s Corner is in the best form of his career for Bill Mott. The one-turn specialist overpowered his competition in three starts this year while pressing the pace. In the Met Mile, the son of Street Sense ran into the undefeated Flightline, and he just was not able to keep up after setting the early pace. Speaker’s Corner raced eight times since last summer without any significant time off and will face a similar scenario to the Met Mile when he meets Life Is Good in here. Win contender.

Summary: The John A. Nerud matchup between Life Is Good and Speaker’s Corner pits two of the fastest horses in training. Speaker’s Corner earned the highest Beyer Speed Figure of the 2022 with a 114 in the Carter Handicap and Life Is Good’s 112 is the top Beyer at a distance of more than a mile this year.

Life Is Good turns back in distance to race around one turn, where he is probably at his best even though he has those big wins in the Pegasus World Cup and the Breeders’ Cup Dirt Mile.

Speaker’s Corner could not compete with Flightline in the Met Mile, and maybe no horse will be able to do so. But he just might be facing a similar situation with Life Is Good, especially on the heels of a rigorous campaign that goes back to last summer.

Life Is Good has seven wins as a heavy favorite and is my top choice to do it again as a fresh horse in the John A. Nerud.