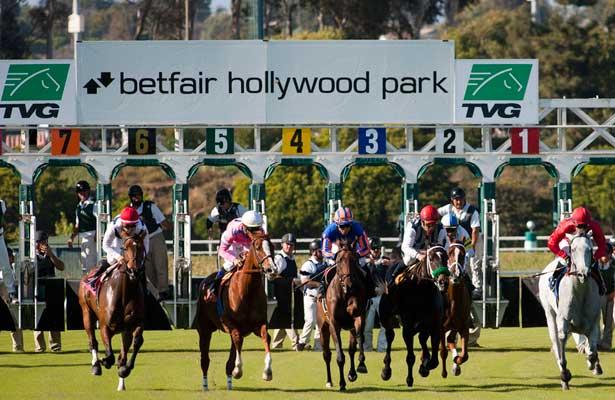 Favored Joelito won for the second time in three starts on turf, defeating Unbridled Giant and five other 3-year-olds in the $54,500 feature Thursday at Betfair Hollywood Park.

Twenty-seven days after finishing a respectable fourth in the Grade II American Turf at Churchill Downs, the Rock Hard Ten colt won by a half-length under jockey Joe Talamo. The final time for the one mile was 1:34.35.

Owned by J.W. Singer, Inc. and trained by John Sadler, Joelito, who is out of the Mr. Greeley mare Miss Greenley, won for the second time in six starts.

The $32,400 payday boosted his bankroll to $91,607. Both of Joelito’s wins have come in three races on turf. The dark bay earned his maiden victory April 6 over the Santa Anita grass.

Positioned a few lengths off the pace set first by Saint Prado before Unbridled Giant took over on the backstretch, Joelito engaged for the lead entering the stretch, battled with the 7-1 runner-up for most of the final eighth of a mile before taking command near the finish.

Never less than 4-1 before Thursday, Joelito paid as the 6-5 choice. Unbridled Giant, who had defeated $75,000 maidens April 28 in his first start over the Betfair Hollywood Park turf, returned while finishing a half-length in front of Horizon Sky. The show price on Horizon Sky, who added blinkers for trainer Jeff Mullins, was $2.60.

A recent arrival from Golden Gate Fields, Orozco, who has a seven-pound weight allowance, is a native of Glendale. He earned his first thoroughbred win April 21, 2012 at Golden Gate.