Jockeys refusing to ride at Monmouth with crop rule 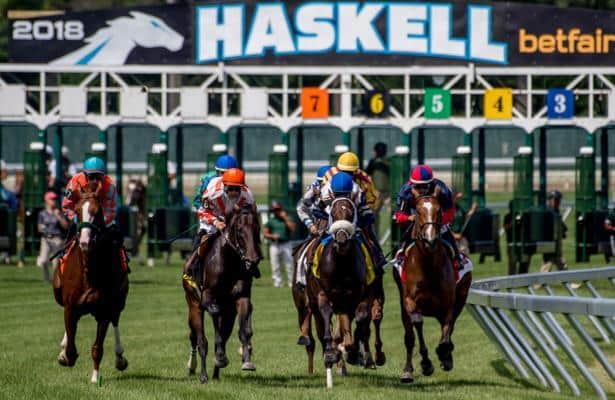 Monday's New Jersey Superior Court decision virtually banning the use of the riding crop in Thoroughbred racing has led some jockeys to refuse to ride at Monmouth Park.

New Jersey's stricter riding crop rule would ban its use "except for reasons of safety." It is set to take effect with the start of the Monmouth Park meet on May 28. The court denied a request from the Jockeys' Guild to delay enforcement of the rule pending a decision on its appeal, which has not yet been decided. The court denied the stay on Monday.

Jockey Joe Bravo has been especially outspoken on social media, and he told Horse Racing Nation Wednesday morning that he will not ride at Monmouth Park this year if the crop rule is in effect.

Although the new rule is intended to increase safety, Bravo said it would have the opposite effect.

"There's such a quick movement that horses do," he said. "It's a horse race. And if you have to second judge your judgment in any manner during the race, before you know it, it's already too late.

"And, God forbid, turf facing? You see your horse goes from last to first in the last five jumps. You got to make sure you can control them going in between horses like that. He does any certain movement either way and you can't control them with the crop, it's too late. You're telling me OK, we can just use the reins. Well, when you've got movement like that, you've got to keep that forward movement going."

He understands that other jurisdictions are tightening the rules for crop use.

"But Monmouth Park is putting something in place that – there's no other race track other than Norway, and Norway's racing is not even Class A, B, or C. It's more of a fair meet. When this was first brought up to me that they were going to try to have horse racing with this kind of rule, I didn't fathom it it. I didn't think there was no way it would be passed. And through the years, through the legislation, I guess the committee did this without even speaking to – not just I, but to any New Jersey jockey."

Here is what other jockeys had to say on the matter:

I don’t blame them either and I’m going to tell my agent not to take any calls for Monmouth Park even if they are big races. https://t.co/ViARsjtBNd

Agree with all of you that NOT going to ride under this crazy rules made by people that never been on the back of a horse ! https://t.co/VIjvAVb4IQ

NJRC really trying to kill Horse Racing. Jockeys can’t fight and do this alone. Everyone that has a vested interest in racing in NJ should step up to the plate and voice their concern to get this overturned.

Terry Meyocks, president and CEO of the Jockeys' Guild, thinks the rule is misguided, to put it kindly.

"We had a conference call with a number of Jersey riders and our board yesterday after we were informed that the stay was denied by the appellate court," Meyocks told HRN. "It could be heard sometime this summer. So we're just updating the riders. And some of the Jersey riders, they're aware of what was going on for the last year and a half to two years. It's unfortunate.

"The last the last year or so, we've had myself or Mindy Coleman, our attorney. We've had Johnny Velazquez. We've had Mike Smith, we've had Joe Bravo, we've had Javier Castellano, we've had Julien Leparoux. We've had Aaron Gryder, Mike Smith, Cody Jensen, the quarter horse jock, G.R. Carter, talking to people – regulators, racetracks – about the riding crop. And they haven't listened to the Johnnys and the Mikes."

Meyocks said it is important to remember that the matter goes back 10 or 11 years, when the guild "got basically the entire country changing the popper" in crops, resulting in maybe 98 percent of horses showing no cuts or welts.

"Today's riding crops do not hurt horses. Right now, they make a lot of noise and stuff like that."

But that is not widely known, he said. "OK, we have to change perception. Now we're willing to change, we've been willing to change perception, but not at a risk of somebody's livelihood. Or, again, we are in the racing industry, in the betting industry, and horses, most of them, are herd horses, they won't pass other horses without some form of encouragement. You got to think about the bettors, you got to think about the owners, the trainers, the breeders, even."

And he believes that is exactly what the New Jersey racing commissioners are not doing.

"Basically, these people, these racing commissioners – I made a comment a month ago to somebody that they've lost their minds or they're clueless. And I don't know where what they're thinking about. They're not listening to Hall of Fame jocks, who probably are the most respected people in our industry, Mike and Johnny … neither one of them has been recognized as big riding crop users."

A broad defection "absolutely" would have an impact on Monmouth Park, he said, adding that the track has been the "cornerstone of Midlantic racing."

The bottom line, Meyocks said, is that "going back, we've changed the popper, we've been concerned about the safety of the horse and rider. …The racing commission, in their ultimate wisdom, have come out said, 'well, the jockeys can use their legs.' It's ignorant."