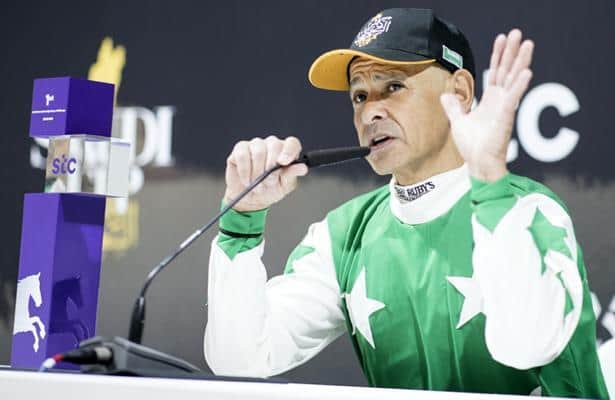 Board-hitting finishes in the $20 million Saudi Cup weren't quite as profitable as expected for Hall of Fame jockey Mike Smith and Irad Ortiz Jr., the two-time defending Eclipse Award winner for outstanding rider.

Smith (second aboard Midnight Bisou) and Ortiz Jr. (fourth on Mucho Gusto) were assigned suspensions and fines on a sliding scale for whipping their mounts with too much frequency in the stretch at King Abdulaziz Racecourse.

Journalist Jon Lees reported, per a Jockey Club of Saudi Arabia steward, that Smith received an eight-day ban for striking Midnight Bisou above the permitted 10 times. A ninth day was tacked on for using the stick with no regard for the horse's stride. Earlier in the evening, Smith received two more days on the sidelines for failing to weigh in after an undercard race.

Additionally, Smith forfeited 60% of his earnings. Midnight Bisou's connections split $3.5 million for second, with Smith presumably handing back $210,000 of his $350,000 split, 10% of that original total.

"All riders, including Mike, were spoken to at a briefing on Friday and Saturday, and reminded of the relevant rules and penalties," steward Phil Tuck told the Racing Post. "A guide to all relevant rules was emailed to visiting riders before their arrival and copies were pinned up in the changing rooms. We are protecting the welfare of the horse and all riders were informed of this."

Ortiz Jr., who it appears was not given days for his scrutinized back-and-forth swerving to block Maximum Security in the stretch, did surpass the whip threshold as well. Per Lees, Ortiz received an eight-day suspension stemming from Friday's King Abdulaziz card and two more days, plus a 10% purse reduction, for going to the whip too much in the Saudi Cup.

Whether the suspensions will be held up upon the jockeys' returns to the United States -- Smith rides in California and Ortiz Jr. in Florida this time of year -- is unknown. Typically, jurisdictions do honor rules decisions made elsewhere, such as in 2019 when John Velazquez was sidelined in New York for whip violations on a trip to the Royal Ascot meeting in England.