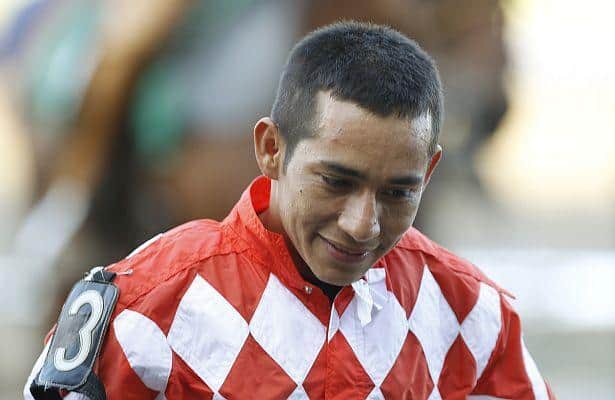 The commission seemingly ignored the Guild’s concerns when it prohibited the use of the riding crop except for safety considerations. Hot Rod Charlie, under a vigorous hand ride from Flavien Prat that failed to straighten him, came in on Midnight Bourbon and caused them to clip heels. Midnight Bourbon nearly went down while unseating López, who was fortunate to escape serious injury.

“I blame the New Jersey Racing Commission for rules they put into effect without any communication with anybody. They forced it. It’s unfortunate, and they should be held accountable for it,” Meyocks said.

Prat also believes the potentially catastrophic contact could have been avoided. “If I could have hit him just one time left-handed, we would have been just fine,” he told Blood-Horse. “But it is what it is.”

Belmont Stakes runner-up Hot Rod Charlie, who went on to outduel Mandaloun by a neck, was disqualified and denied his first Grade 1 victory. Stewards placed the heavy favorite last while elevating Mandaloun. López, who was prone while he was removed from the track on a stretcher, was initially diagnosed with soft-tissue injuries to his knee and ankle. Midnight Bourbon also apparently escaped major injuries after he was retrieved by an outrider.

Meyocks hopes the tainted result in a $1 million race that represents the centerpiece of Monmouth Park’s summer meet will lead to change.

“The safety of the horse and rider should be paramount, and it’s not,” he said. “We tried to express that to them, and we had to go to court. Hopefully, what happened at the Haskell will get the Appellate Court and the Superior Court in New Jersey to react sooner rather than later.”

Meyocks also accused the commission of being inconsistent in its approach.

“The Racing Commission has not enforced the rules in New Jersey,” he said. “You go out there in the mornings, they are supposed to have the softer, equine-friendly crop for exercise riders and riders. They are not enforcing that.”

Meyocks noted that the Guild moved to a softer riding crop in 2008. He emphasized its willingness to work with various jurisdictions on finding ways to improve the public’s perception of racing. He acknowledged, however, that only so much can be done.

“At the quarter pole coming for home and going through a hole, you need some form of encouragement to get through the hole before the hole closes up,” he said.

In a grim reminder of the danger inherent in racing, Eduardo Gutiérrez Sosa suffered fatal injuries when Godfather Advice, a 2-year-old quarter horse trained by his wife, fell during a race in Oregon. Gutiérrez Sosa, who also rode Thoroughbreds, was 29.

Meyocks said he initially feared for López, who was kicked by at least one horse that trailed Midnight Bourbon.

“It almost came to a catastrophe,” he said.