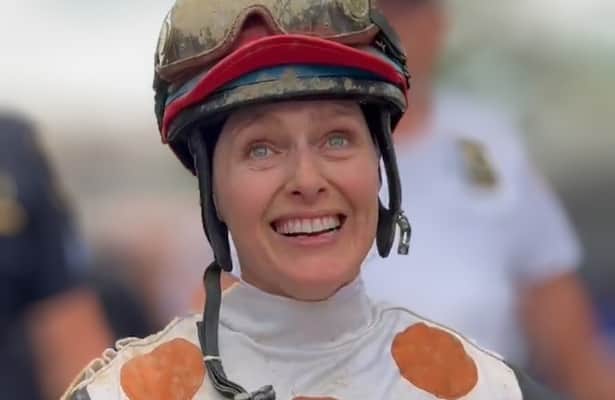 A win at Saratoga is always nice for a jockey. The first win is special. When it comes aboard a 24-1 shot, even more so.

But Jackie Davis topped all that Saturday when she won the fifth race on Vallelujah, trained by her father, former jockey Robbie Davis.

“This winner means the world to me because it’s my first race at Saratoga, and for my dad, especially," Davis told Horse Racing Nation's Andrew Capone. I know he won a lot of races here as a jockey, but us together – I’m beside myself, I’m so happy. I didn’t know if I was going to cry, laugh or fall off after the wire.”

"This winner means the world to me" - Jockey Jackie Davis after winning her first race ever at Saratoga on $51.00 winner Vallelujah, trained by her father Robbie Davis, a former jockey himself. pic.twitter.com/Ymo7zlURoe

The win came in Davis's 12th start in the Saratoga meet. She also has had two second-place finishes, one of them in Saturday's sixth race.

“The last two days, I’ve been out in the morning, the rail’s been wicked deep," she said. "And when I went out there to warm up, I left the pony, and I was like, ‘how did they get the rail so good?’ So I just sat on the rail and waited my turn – and prayed they opened it.”

About that rail ride. “I told her to stay off the rail," Robbie Davis told Maggie Wolfendale of Fox Sports. "Well, there we go.”

Not that he minded. "I’m so excited, I just can’t believe it. I’ve been on this filly every day, and Jackie coming in from Finger Lakes to ride her. This is just incredible – the only thing better than this is the Travers.”

One of the greatest winner circle celebrations we've seen here at Saratoga! ?? Vallelujah at 24-1 takes the 5th with @JockeyJaDavis up for father Robbie Davis! #SaratogaLive captures the moment ??? pic.twitter.com/W1GOToOIf8