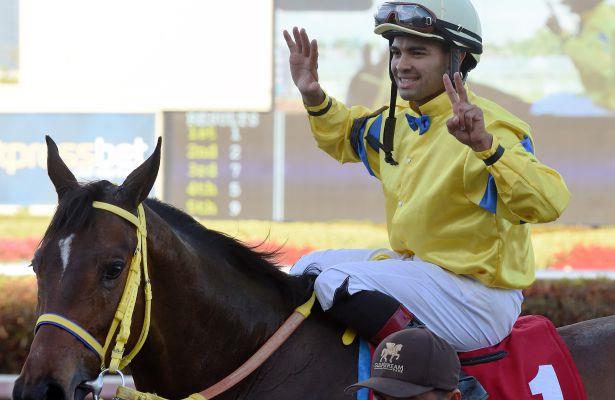 Jockey Luis Saez reached a milestone Friday at Aqueduct Racetrack, notching his 2,000th win in North America when he rode Y'allcomenow to victory in Race 4, a maiden event at one mile on the inner turf.

"It was exciting. This is so special. I'm thankful for getting 2,000 wins," Saez said. "It's not easy. I'm just working hard. When I came to New York, it was hard, but I'm just going to keep trying.

"I've been learning every day and working hard and trying to do my best. When I first came here [to New York], I didn't have the experience. But I've tried to develop. It's very special to do it here. New York has the best horses, the best riders and the best trainers. It's not easy. But thank God we did it."

Saez was born in Panama City in 1992 and attended the Laffit Pincay, Jr. Jockey Training Academy in Panama. In 2009, Saez began to apply his craft at Calder Race Course [now known as Gulfstream Park West], earning his first win aboard Fearless Honor on August 20 of that year. More success followed quickly, as Saez captured his first graded stakes win in the 2010 Grade 3 Tropical Turf Handicap at Gulfstream Park. His first career Grade 2 win came in 2011 aboard Musketier in the W.L. McKnight Handicap at Gulfstream.

Just four years after his racing debut, Saez piloted Will Take Charge to a memorable 2013 campaign in which he won the Eclipse Award as Champion 3-year-old. Under Saez's direction, Will Take Charge won the Grade 2 Pennsylvania Derby, the Grade 1 Clark Handicap, and the Saratoga season's main event-the Grade 1 Travers Stakes, which also marked Saez's first Grade 1 victory. He led Will Take Charge to second in the Breeders' Cup Classic that year during the same championships in which he rode runner-up Judy the Beauty in the Breeders' Cup Filly and Mare Sprint.

Other notable winners for Saez includes this year's Grade 1 Man O' War with Hi Happy, Promises Fulfilled in the Grade 1 H. Allen Jerkens presented by Runhappy and the Grade 1 Arkansas Derby with Magnum Moon. He also registered his best finish in a Classic, leading Bravazo to a second-place effort in the Preakness this year.