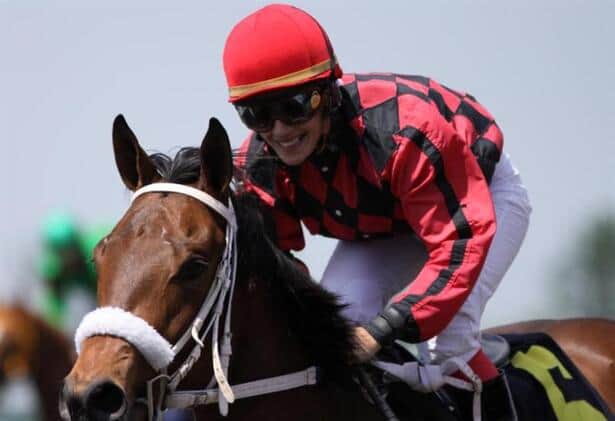 Wednesday, July 22 started out like any other day for jockey Oriana Rossi. The vibrant, young woman, who has ridden horses since the age of two, was ready for a regular day at the track. However, this unfortunately, was not going to be a normal day. At 4:04 p.m., she broke from the gate aboard Top Priority for trainer Ron Brown and trailed the field early on, a position that would prove costly. Nearing the half-mile pole, her mount fell over a fallen horse and the blunt force sent Rossi flying to the ground. Her mount left the track under his own power. Rossi wasn’t so lucky.

Jockeys know it’s inevitable they will get injured at some point in their career. Broken bones are just part of the job, but Rossi’s injuries are every jockey’s worst nightmare. She suffered several severely broken vertebrae, including T-6, which broke in half. The action of it breaking is what damaged her spinal cord. She was diagnosed with an “incomplete spinal cord injury.” According to Rossi, “thankfully, this means there is a chance of my legs working again. Unfortunately there is no definite prognosis, because it’s such a complicated type of injury. Everybody’s case is different. They can’t tell you ‘yes, you’ll be able to walk again in so many months, etc.’ It’s a wait and see scenario.”

After an extensive stay in Methodist Hospital in Indianapolis, Rossi was transferred to a local rehabilitation center for physical and occupational therapy. Doctors and staff were impressed at her rate of progression, and after a month she was discharged to adjust to life in a wheelchair at home. Fortunately, her parents Heidi and Trevor Mortimer came from their home in England shortly after the incident and helped her make the transition.

“In the hospital everything is set up for your injury,” Rossi said. “But, it hit me when I got home – I was going to have to readjust to everything. Everything takes longer to do; silly things like getting dressed and putting shoes on. Cooking is a pain with the countertops. Everything is a pain, but it’s doable.”

A trip to the winner’s circle used to be a celebration for Rossi. Now, it’s things that her fellow riders take for granted. Several weeks ago, Rossi gained the ability to move the toes on her right foot. It was ever so slight, but it was a major milestone. Shortly thereafter, she gained movement in the right ankle.

“I found that on the same leg that I can move my toes and ankle (right), I can extend my lower leg,” Rossi said. “Which is kind of a great thing! I didn’t realize I could do it until the doctor told me to. Movement is going back up my leg it seems. Unfortunately, it’s only the one leg for now, so I’m hoping the left leg will catch up with the right. It took six or seven weeks to get any movement in the toes, so maybe it’s just a patience thing on my part. And, I’m not good on patience.”

Shortly after the incident, a GoFundMe account was set up on Rossi’s behalf. In two months, more than $15,000 has been donated. Jockeys and horsemen from around the country have sent cards, well wishes and donations.

“It really did surprise me,” Rossi said, “I had no idea how many good people I know, and how many good people I don’t know. Even strangers have offered support in one way or another. It was very humbling to realize how much people can show they care about something that doesn’t affect them at all. It was very helpful to me to have that support. It made a big difference. I can’t say how good everyone has been; my friends, people at the track, Indiana Grand, it all has been fantastic.”

Rossi visited Indiana Grand several weeks ago, her first time since the incident. It could’ve easily been bittersweet.

“The main feeling I had, and it sounds odd to say, was it felt like home,’ Rossi said. “I was in the jocks room which is somewhere I’d been every day. But having been gone from there, then returning from under awful circumstances and not being able to do what I do. It was great to see everybody. I missed everybody a ton. And seeing the horses was something that really made me happy. I was on the apron talking to some of the pony people. There was a moment where I was rubbing on the nose of one of the ponies and it was comforting. This is the longest time that I’ve been away from horses my whole life. It was really nice to be back and super to see everybody.”

One of the first people Rossi saw on her visit to the track was Clerk of Scales and longtime friend, Steve Cahill. He was at the emergency room the day of the spill and visited continuously throughout her hospital and rehab stays.

“I’ve seen a side of Oriana that absolutely amazes me,” said Cahill. “Most people would say ‘why me’ and she’s never said that. She says ‘when I walk again, when I ride again’. It’s just amazing to me the strength that she’s shown physically and mentally. She’s determined and can’t wait to get back on a horse. Most people would say it’s the last thing they want to do, but that’s her life. I’m just so impressed with her attitude and I don’t think I could do it.”

Some might call it a blessing that Rossi has no recollection of the incident that occurred that day. “I don’t remember even one little thing from that particular day; not even the day before. And I don’t remember two weeks after.”

Many people that go through a life changing experience learn something about themselves that they didn’t know before. When asked what Rossi learned about herself, she initially struggled with the answer. “That’s a really good question,” Rossi replied. “This is by far, hands down, the hardest thing I’ve ever had to deal with. I guess I’m resilient and determined. It’s probably something brought home by this situation. I am determined to get out of it, if at all possible. Because I don’t like it.”

Jockey Rodney Prescott always leads the charge to help out injured fellow riders. “It could’ve been any one of us,” said Prescott. “When you see it happen to somebody, you ask yourself, ‘how would I handle that’? I think she’s handling it ten times better than I ever could. I have a tremendous amount of respect for her and her attitude is great. She’s not a poor me kind of person. She’s an inspiration.”