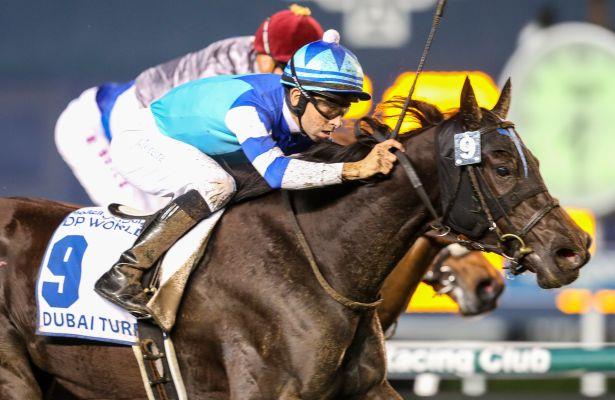 That left Hong Kong’s champion jockey Joao Moreira to provide followers of the city’s racing scene with something to cheer, thanks to a winning ride atop Japan’s Vivlos in the G1 Dubai Turf (1800m).

On an evening of middling expectations for Hong Kong, the John Size-trained Amazing Kids had appeared to be the best hope of victory. A straight track 1200m and the familiar feel of turf under hoof in the G1 Al Quoz Sprint seemed to be favorable factors, and with the barriers positioned against the inside rail, even the one gate appeared less disadvantageous than it had at Wednesday’s draw.

But after a sharp start to share the lead, things quickly went awry for Amazing Kids. As Moreira looked to find cover, Size’s first Dubai runner struggled to hold his own. The big bay was shuffled back and shifted sideways to center track, running on evenly in the closing stages to claim the US$20,000 check for sixth place, four lengths behind the principals.

“It seemed like he’s still inexperienced for a horse to come overseas,” Moreira said. “It wasn’t a bad run, to be honest. It was a good run - his inexperience just got him beat. I don’t think it was the ground.”

The official going was good – after a wet morning and intermittent showers once proceedings had begun – and that suited just fine the victorious French raider, The Right Man. Francois-Xavier Bertras drove the Didier Guillemin-trained five-year-old to hold on for a bare nose success over the Bill Mott-trained American galloper Long On Value, with the local hope Ertijaal third. The winning time was 1m 09.59s and connections are now considering a trip to Sha Tin in May for a tilt at the G1 Chairman’s Sprint Prize (1200m), for which the gelding is nominated.

With Amazing Kids’ defeat still fresh, Hong Kong hopes turned to Not Listenin’tome and Dundonnell in the very next race, the G1 Dubai Golden Shaheen (1200m, dirt). But issues in the opening strides proved both horses’ undoing.

“Tommy (Berry) said he got chopped out at the start and got further back than he wanted and didn’t get clear running,” trainer John Moore said after Not Listenin’tome had boxed on from deep to finish seventh, six and a quarter lengths behind the American winner, the Chad Summers-trained and Joel Rosario-ridden Mind Your Biscuits.

Dundonnell’s race was not dissimilar, although Caspar Fownes’ charge enjoyed a sharper break before hitting trouble and shuffling back towards the tail.

“I got a very bad squeeze at the start. I was lucky to stay on and couldn’t get back into it after that,” jockey Christophe Soumillon said. Dundonnell passed the post eight and a quarter lengths back in ninth. Up ahead, Mind Your Biscuits scored by three lengths in a time of 1m 10.91s

Moore took one positive from the experience.

“Tommy said that the horse did handle the dirt, he did get through it and he closed off,” he said. “It was just the early pace that did him – when he dropped out at the start – that was the key factor to not finishing in the money.”

Moreira gave the Meydan crowd a taste of what the Sha Tin faithful are privy to every week as he produced Japan’s Vivlos to win the G1 Dubai Turf (1800m).

Disappointed after the defeat of Amazing Kids, Hong Kong’s champ was his beaming, fist-pumping self as he returned to the winner’s circle after sweeping centre track to win the top-class contest by half a length from Heshem in a time of 1m 50.20s.

“She was brilliant,” Moreira said of last season’s G1 Shuka Sho winner. “From the time that I sat on top of her on Friday, she gave me the feel that she was going to be very competitive. She was probably the lightest horse in the race and so she wasn’t sinking down, she was able to let down strongly in that ground.

“She made the job very easy for me. She travelled comfortably and when I put her in daylight she was strong to the line and got it done.”

The night’s feature, the G1 Dubai World Cup (2000m, dirt) went to US champion Arrogate for trainer Bob Baffert and jockey Mike Smith. Khalid Abdullah’s Juddmonte Farms four-year-old scored by an impressive two and a quarter lengths in a time of 2m 02.15s.