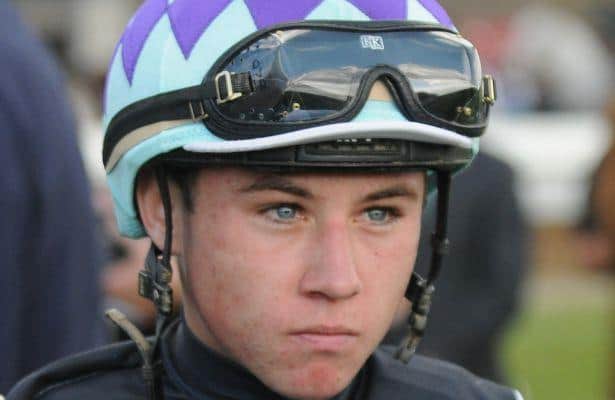 Photo: Jessica Morgan/Eclipse Sportswire
Drayden Van Dyke was doing well at Huntington Memorial Hospital in Pasadena Sunday recovering from surgery on his broken right arm suffered when the 22-year-old rider was involved in a two-horse spill at Santa Anita in Thursday’s fourth race.
“He’s resting, he’s got a right forearm fracture and he’ll take his time and let it heal,” his agent, Brad Pegram, said Sunday morning, taking solace in the fact that the other rider he represents, Hall of Fame member Mike Smith, won the $12 million Pegasus World Cup Invitational Saturday aboard Arrogate.
“There’s no time frame (on how long it will take before Van Dyke resumes riding),” Pegram said. “We’ll take our time. The good thing is he’s young, it’ll heal and go from there.”
FAVORITES ROLL A SEVEN IN ‘NICK’ OF TIME
Owner/breeder Nick Alexander had back-to-back winners sired by Grazen Saturday when Enola Gray captured the Sunshine Millions Filly and Mare Turf Sprint for trainer Phil D’Amato and All of a Sudden came back to take the next race for trainer Steve Miyadi.
The two winners were part of a string of seven straight favorites Saturday, ranging from And Then Some (5.80) in the first race; Enola Gray (3.20) in the second; All of a Sudden (4) in the third; Gypsy Ju Ju ($5.20) in the fourth; Sircat Sally ($3.80) in the fifth; Richards Boy (6) in the sixth; and Ashleyluvssugar ($4) in the seventh.
River Echo ended the chalk streak big time when he won the eighth race paying $44.40 for trainer Peter Miller, who also saddled 19-1 longshot Aldrin ($21.40 to place) to finish second, forming a $246 exacta for $1.
“I’m relieved to win,” Alexander said after Enola Gray’s victory. “We haven’t won a race since the last race she won in October. We’ve been nosed out twice. We got disqualified once, on New Year’s Eve so, we needed a win.
“She’s a neat horse, she really is. The dam had not had anything worth a darn before that. Everyone that gets on her says you can’t even feel her hit the ground. She just has one of those big, long strides. She’s a sweetheart.
“She threw in two horrible races at 1-9 and 1-5 and she got beat, with no apparent excuse. I think she has to be on the lead, or fighting for it. I think you have to go as fast as you can and that’s the way she likes it. That’s the way her daddy liked it, too.”

FINISH LINES: Santiago Gonzalez, who has been aboard Grade I-winning stretch runner Hard Aces in his last six races, including a victory the Grade III Cougar II Handicap, retains the mount in Saturday’s Grade II San Antonio Stakes for four-year-olds and up at 1 1/16 miles . . . Multiple graded stakes winner Masochistic, prepping for the Grade I Triple Bend Stakes on March 11, worked six furlongs Sunday for Ron Ellis in 59 flat . . . Santa Anita hosts the Dumpling and Wonton Festival next Saturday, Feb. 4. Patrons can snack on scrumptious Asian and Asian-inspired dumplings and wontons on Santa Anita’s trackside apron. Buy online and save at www.santaanita.com/events . . . Next Sunday, Feb. 5, the day of The Big Game, live racing at Santa Anita begins at 11 a.m., allowing fans to watch The Big Game at Sirona’s Sports Bar after the races or to be home in time to view it. General admission to the track that day is only one dollar. Santa Anita is dark for live racing Monday through Wednesday. Live racing resumes Thursday, Feb. 2, at 1 p.m.