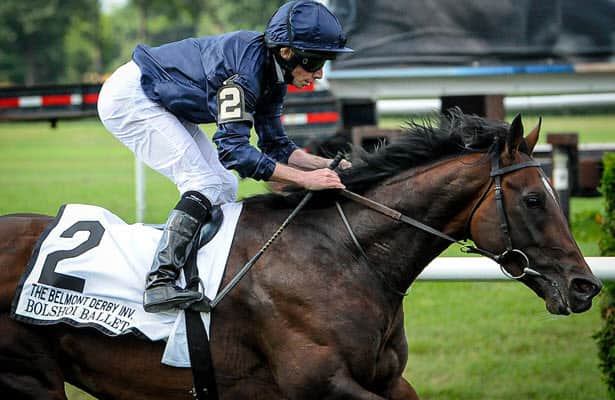 Saturday's $1 million Jockey Club Derby Invitational is the third race of the Turf Trinity series that was run during the summer on the NYRA tracks. The first two legs were won by European runners; Bolshoi Ballet took the Belmont Derby (G1) for Aidan O’Brien and State of Rest was the winner of the Saratoga Derby (G1) for Joseph O’Brien.

The Jockey Club Derby at Belmont Park is for 3-year-olds only and will be run at 1 1/2 miles on the Widener (outer) turf course. This year the race provides a win-and-you're-in spot in the $4 million Breeders’ Cup Turf at Del Mar on Nov. 6.

Here is a full-field analysis for the Jockey Club Derby, which is carded as race 10 of 11, with odds provided by the Horse Racing Nation staff. Post time is scheduled for 5:45 p.m. EDT.

1. Tango Tango Tango (15-1 – Tourist – Jack Sisterson / Flavien Prat – 5: 1-2-1 - $134,491) This Kentucky-bred woke up when he was switched to grass by trainer Jack Sisterson. He was a bargain purchase by Calumet Farm for $35,000 as a yearling. He was second as maiden in his first try on the turf at Ellis Park and then came back to win the American Derby at Arlington Park as a maiden. In the Bruce D. (G1) last month, he had the lead at the stretch call by a head and finished second after drifting in the stretch and getting bumped. He raced with Lasix in all five starts but will not be able to do so at Belmont and will have to stretch out to the 1 1/2-mile distance. Use underneath.

2. Yibir (GB) (3-1 – Dubawi (IRE) – Charlie Appleby / Jamie Spencer – 10: 4-1-2 - $280,580) Yibir became a Group 2 winner in his most recent start at York while racing the 12-furlong distance of the Jockey Club Derby. Owned and bred by Godolphin Stable and trained by Charlie Appleby, he took control of that race a furlong from the finish. Yibir also won a Group 3 at Newmarket in July in a similar fashion. European horses won the first two legs of NYRA’s Turf Triple, and that makes him the horse to beat. Top choice.

3. Tokyo Gold (FR) (5-1 – Kendargent (FR) – Satoshi Kobayashi / John Velazquez – 8: 3-2-1 - $603,472) Tokyo Gold was taken to the back of the field in the Belmont Derby and then rallied to finish second at odds of 16-1 just a neck ahead of the show horse. He came to Belmont Park following a win in the Derby Italiano (G2) in Italy after racing in France for the rest of his starts. Win contender.

4. Soldier Rising (GB) (5-1 – Frankel (GB) – Christophe Clemente / Irad Ortiz Jr. – 5: 2-3-0 - $239,070) Soldier Rising began his career in France where he was stakes-placed at Longchamps. After that race, he was sent to the U.S. to Christophe Clement and rallied from 10th to finish second in the Saratoga Derby (G1). We know that this son of Frankel can compete at this distance. He has trained steadily since his last start, with his most recent work at Belmont. In five career starts, he did not finish worse than second. Win contender.

5. Step Dancer (15-1 – War Dancer – Barclay Tagg / Dylan Davis – 7: 3-1-2 - $219,800) This New York-bred won a state-bred stake at Saratoga going a flat mile on the grass by a neck after a strong rally. Last year as a 2-year-old, he was successful against open company in stakes races at Belmont while third in the Pilgrim (G2) and then won the Awad. Like others in this field, Step Dancer will have to race this long distance for the first time. Use in exotics.

6. Experienced (12-1 – Temple City – Jonathan Thomas / Jose Ortiz – 3: 1-1-0 - $50,300) This lightly raced home-bred was a debut winner on the grass at Delaware Park and then was second in Bald Eagle Derby at Pimlico in July. Experienced’s most recent start was in the Virginia Derby (G3), where he ran fifth as the favorite after making up ground. The son of Temple City was the favorite in all of his starts as trainer Jonathan Thomas’ runners often attract a lot of action at the betting windows. Toss.

7. Slicked Back (6-1 – Quality Road – Brad Cox / Luis Saez – 4: 2-1-0 - $90,850) Slicked Back ran well in both of his turf races. He won an allowance at Indiana Grand for trainer Brad Cox and then shipped to Colonial Downs to finish in the place position in the Virginia Derby (G3). In Virginia, Slicked Back had to find a path through traffic at the top of the stretch and then was able to rally once he got clear on the outside at odds of 12-1. Live long shot.

8. Bolshoi Ballet (IRE)(2-1 – Galileo (IRE) – Aidan O’Brien / Ryan Moore – 8: 4-0-1 - $703,454) Bolshoi Ballet is the only horse in the field that ran in the first two legs of the Turf Trinity. In the Belmont Derby on a turf course that was labelled good, he took control of the race with a furlong to go after a late rally and was a convincing winner as the even-money favorite. A month later on firm grass at Saratoga, he pressed the pace and weakened down the stretch. It will be interesting to see if Ryan Moore makes a closing run or stays close to the pace. No doubt that Bolshoi Ballet will be the favorite as they try to win another $1 million purse. Win contender.

Summary: The Europeans have dominated the Turf Trinity, winning the first two legs this year and the inaugural Jockey Club Derby last year. That makes Yibir, Bolshoi Ballet and Tokyo Gold the horses to beat along with Soldier Rising, who made his first American start for Christophe Clement in the Saratoga Derby.

Among the American runners, Tango Tango Tango had a noteworthy second in the Bruce D. at Arlington Park and Slicked Back overcame traffic problems in the Virginia Derby and also finished second. These two might be worth using underneath in the trifecta with better odds, although it is possible that the Euros will sweep the top three spots.