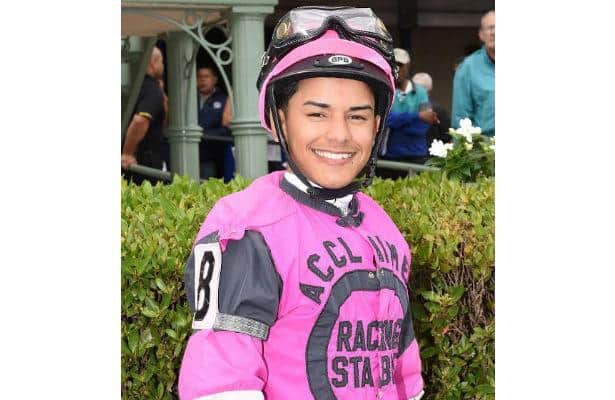 Acclaimed Racing Stable’s Little Baker took the lead with two furlongs to run and held off a late charge from Bright Guy to win Sunday’s third race by a head and give apprentice jockey Eric Cancel his first victory in the United States.

It was just the fourth mount of the Championship Meet for Cancel, an 18-year-old native of Puerto Rico, where he won four of 32 races before moving to continue his riding career in South Florida.

“It feels great,” Cancel said. “I have to give thanks to the trainer and owner, that they gave me the opportunity to ride their horse.”

A 4-year-old daughter of Forestry trained by Kirk Ziadie, Little Baker ($6.80) ran six furlongs in 1:11.92 on a fast main track for her third win in 16 lifetime starts as the 7-5 favorite in a field of eight.

Cancel’s parents, Efran Cancel and Gezzela Algarin, are both former jockeys who rode in Puerto Rico. Algarin, who won 25 races there and was also president of its Jockey’s Guild, was on hand for her son’s breakthrough win.

“I moved to Florida about a year, a year and a half ago and Eric was left behind so he could finish his training in the jockey school,” Algarin said. “I really am (proud). You don’t know.”

Cancel attended Puerto Rico’s Escuela Vocacional Hipica, based at Camarero Race Park, graduating in January. He is hoping to follow in the footsteps of recent graduates Edgard Zayas, now based at Gulfstream, Victor Carrasco and Manuel Franco, the three finalists for the 2013 Eclipse Award as top apprentice, won by Carrasco.

“The purses of the races are a lot better here,” said Cancel, whose agent is Hall of Famer Angel Cordero. “Riding with these good jockeys is something that every bug boy wants to do.”

The innovative exotic bet produced a $6.6 million jackpot on May 25, 2014, setting a national record for pick-6 wagers.

The Rainbow 6 carryover jackpot is paid out only when there is a single unique ticket sold with all six winners. On days when there is no unique ticket, 70 percent of that day’s pool goes back to those bettors holding tickets with the most winners while 30 percent is carried over to the jackpot pool.

Lori's Store Captures Featured 11th with Last-to-First Rush
Miller Racing's Lori's Store closed from last on the turn into the stretch to capture Sunday's featured 11th race at Gulfstream Park by a head.

The 5-2 favorite received a patient and well-timed ride from Julien Leparoux in the 1 1/16-mile optional claiming allowance on turf for fillies and mares.

"We bought her privately. I watched her run, and I ran against her too, and she was hanging in some of her races," trainer Marty Wolfson said. "I changed her style where it's just one run, and Julien is that type (of rider)."

Leparoux saved ground at the back of the 10-horse pack before swinging to the outside with the daughter of  El Prado leaving the turn, and the gray 5-year-old responded in the stretch to prevail over last-running Smartyfly and pacesetter Patsy's Holiday, who was a neck back in third.

"I just leave it up to Julien. It's his style, and he fits her, and it's perfect," Wolfson said. "We might take her to Keeneland (next)."