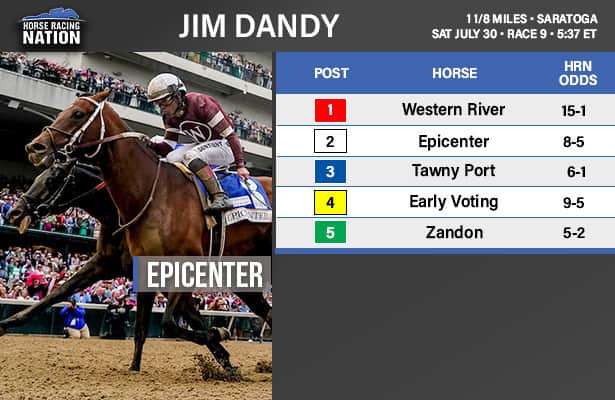 The Grade 2, $600,000 Jim Dandy at Saratoga on Saturday attracted three of the top seven finishers from the Kentucky Derby along with the winner of the Preakness. The Jim Dandy, which is contested at 1 1/8 miles, is one of the local prep races for the Travers (G1) on Aug. 27.

Here is a full-field analysis for the Jim Dandy with morning-line odds from the Horse Racing Nation staff. The race is scheduled for 5:37 p.m. EDT and is carded as race 9 out of 11.

1. Western River (15-1 – Tapit – Rodolphe Brisset / Ricardo Santana Jr. – 7: 2-1-1 - $158,797) Last month Western River won a 1 1/2-mile allowance at Churchill Downs by more than five lengths as an odds-on favorite. That came after running fourth in the Peter Pan (G3) at Aqueduct. It took Western River five starts to break his maiden at Oaklawn Park in April. This formidable field is a huge step up in class. Toss.

2. Epicenter (8-5 – Not This Time – Steve Asmussen / Joel Rosario – 8: 4-3-0 - $1,940,639) Epicenter is the leading money winner in the field with just under $2 million. Four victories along with second-place finishes in the Kentucky Derby (G1) and the Preakness (G1) is how a 3-year-old can rack up so much in earnings. Those earnings point out the quality of the races that Epicenter faced in his eight career starts. He was the favorite in his last three starts including the Run for the Roses. At the beginning of his career he was involved in the early pace, but in the Triple Crown races he sat behind the speed horses and rallied. Hall of Fame trainer Steve Asmussen has a history of getting his best horses to improve the more that they race. Asmussen gave Epicenter a couple of months off after five starts in 2022. Win contender.

3. Tawny Port (6-1 – Pioneerof the Nile – Brad Cox / Irad Ortiz Jr. – 7: 4-1-0 - $727,000) Tawny Port was seventh in the Kentucky Derby at odds of 80-1. Like so many other 3-year-olds that were in the Derby, he came back to run well in his next start by winning the Ohio Derby (G3) at the end of June. He also won the Lexington Stakes (G3) at Keeneland, which means that this Brad Cox runner had victories right before and after the first Saturday in May. Since the Ohio Derby, Tawny Port has trained at Saratoga. He raced with Lasix at Thistledown but will not be able to do so in the Dwyer. Live longshot.

4. Early Voting (9-5 – Gun Runner – Chad Brown / Jose Ortiz – 4: 3-1-0 - $1,311,500) Early Voting won the Preakness in his fourth career start to add to his victory in the Withers (G3) at Aqueduct. His only loss was when he finished second in the Wood Memorial (G2) behind the eventual Belmont Stakes winner Mo Donegal. Chad Brown has given Early Voting two months between races to prepare for the Travers. The extra time to mature will certainly benefit this son of Gun Runner. He has tactical speed which will give him a chance to control the Jim Dandy right from the start. The one to beat.

5. Zandon (5-2 – Upstart – Chad Brown / Flavien Prat – 5: 2-1-2 - $1,013,000) Zandon is a millionaire with only two wins from five starts but that is what happens when you win the Blue Grass (G1) and run third in the Kentucky Derby. In the Derby, he raced in tight quarters early on and got into contention being second at the top of the stretch. He was also second by a nose behind Mo Donegal in a controversial finish in the Remsen (G2). After the Derby, Chad Brown and owner Jeff Drown opted to skip the final two legs of the Triple Crown to prepare for the Travers. So, after almost three months away from racing, Zandon begins his campaign for the Mid-Summer Derby. Win contender.

Summary: With success in the Triple Crown and millionaire status for Early Voting, Epicenter, and Zandon, it is very difficult to separate those very talented 3-year-olds. Certainly, the odds are going to favor Zandon who should be the third choice when the field of five goes into the starting gate.

Tawny Port won the Ohio Derby after finishing seventh in the Kentucky Derby. Trained by Brad Cox and ridden by Irad Ortiz Jr., Tawny Port has red-hot connections and the look of a live longshot as the fourth betting choice.