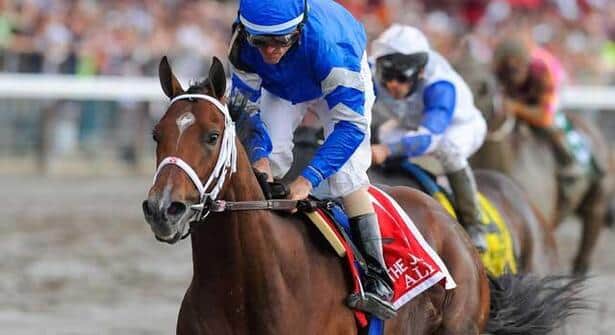 Late Saturday afternoon at Saratoga Race Course, 11 emerging 3-year-olds will assemble for the 143rd running of the Grade 1, $1 million Travers, each one looking to position himself for a run at end-of-the-year honors with a victory in the 1 ¼-mile race.

Since the advent of naming divisional championships in 1936, 18 Travers winners have been named Champion 3-Year-Old Male, most recently Summer Bird in 2009. And with the stars of the spring now out of the picture, Saturday’s “Mid-Summer Derby” takes on new meaning.

“People always say the 3-year-old crop is weak and then you look up and it’s November 7 and they’re winning the Breeders’ Cup,” said trainer Kiaran McLaughlin, who will saddle 5-2 morning-line favorite Alpha in the Travers. “It’s tough to overtake [Kentucky Derby and Preakness winner] I’ll Have Another, but if you happened to win the Travers and the Breeders’ Cup Classic, you would have a good chance. It’s a $1 million Grade 1 and a very important race Saturday.”

With a special first race post time of 11:35 a.m., the Travers is part of a 13-race card also featuring the Grade 1 Foxwoods King’s Bishop, the Grade 1 Test, and the Grade 2 Ballston Spa presented by Jose Cuervo. NBC will provide live coverage from 4 – 6 p.m. The Travers is the final leg of a $1 million Guaranteed All-Graded Stakes Pick 4 being offered by The New York Racing Association, Inc. (NYRA).

The Grade 2 Jim Dandy winner who carries the colors of Godolphin Racing, Alpha has history on his side for the Travers. Since it was first run in 1960, the 1 1/8-mile Jim Dandy has produced 16 Travers winners. Nine of them completed the double, including Alpha’s sire, Bernardini, who won both races in 2006, and Stay Thirsty, another son of Bernardini, who swept both races last year.

Alpha is the only Travers entrant with a pair of victories at Saratoga; in addition to his front-running score in the Jim Dandy, Alpha broke his maiden last September 3 at the Spa, rallying from off the pace to win by six lengths. He has been first or second in all six starts in New York, with his only off-the-board performances coming at Churchill Downs, where he finished 11th in the Breeders’ Cup Juvenile and 12th in the Kentucky Derby.

“We couldn’t be any happier with Alpha going into the race,” said McLaughlin, who saddled Questing to win the Grade 1 Alabama last Saturday, and who could join six other trainers to complete the Alabama-Travers double. “He’s put on weight and developed a lot since he arrived here on June 2. He’s really blossomed and is doing fabulous.”

Ramon Dominguez, Saratoga’s leading rider, will return aboard Alpha, who drew post position 6 and who, with the defection of 2010 juvenile champion Hansen just two hours before Wednesday’s draw, may inherit the role as the likely pacesetter.

Second choice at 4-1 from post position 10 is Nonios, who has been no worse than third in six 2012 starts, including a second to Paynter in the Grade 1 Haskell Invitational on July 29 at Monmouth Park. Trained by Hall of Famer Jerry Hollendorfer, Nonios gets the services of recently inducted Hall of Fame jockey John Velazquez for the race.

“We have a colt who is doing well,” said Hollendorfer, who trains the son of Pleasantly Perfect for Green B. Smith, Jr. “We try not to bring our horses anywhere we don’t think they have a good chance, and I don’t think we’re being foolish or frivolous with him.”

Two lengths behind Alpha in the Jim Dandy was Neck ‘n Neck, who seems to have turned the corner after defeating older horses by 6 ½ lengths on May 10 at Churchill Downs. Trained by Ian Wilkes for A. Stevens Miles, Jr., the Flower Alley colt next won the Grade 3 Matt Winn on June 16, also at Churchill.

“If you watched him early on, he was playing around like he was a teenager,” said Wilkes of Neck ‘n Neck, who won one race from his first seven starts. “He thought it was time to go out and party and have a good time. It’s like the light bulb has gone on and he has put everything together.”

Street Life is one of five Travers starters to have competed in a Triple Crown race, finishing a rallying fourth behind Union Rags, Paynter and Atigun in the Belmont Stakes on June 9. Given a brief freshening after that 1 ½-mile race, the son of 2007 Travers winner Street Sense returned to win the 1 1/8-mile Curlin on July 27 at the Spa, sweeping six-wide and going on to a 1 ¾-length triumph over a sloppy track.

“Hopefully, we’ll get some pace to run at,” said Chad Brown, who trains Street Life for Magnolia Racing Stable and Hidden Brook Farm. “At the end of the day, it will all be up to [jockey] Jose [Lezcano].”

With a victory in the 2011 CashCall Futurity, Liaison is the lone Grade 1 winner in the Travers. The Bob Baffert trainee has yet to find the winner’s circle in seven subsequent starts, including a sixth in the Kentucky Derby and a third to Alpha in the Jim Dandy last time out.

“The track was sloppy, there was no pace to run at at all, and considering that, he finished very well,” said Baffert’s assistant, Jim Barnes. “There should be more speed in the race, so it should be a different scenario.”

Rafael Bejarano comes in from California to ride the Indian Charlie colt, who drew post position 9 and was listed at 8-1 on the morning line.

Atigun is one of two Travers entrants from the barn of trainer Ken McPeek, along with Grade 2 Tampa Bay Derby runner-up Golden Ticket. Third in the Belmont Stakes, Atigun most recently finished sixth in the Jim Dandy, and McPeek is hoping for some pace to run at Saturday.

“He needs every inch of ground he can get, and he needs pace in the race, which he didn’t get in the Jim Dandy at all,” said McPeek, who trains Atigun for Shortleaf Stable. “We’re going to give [jockey] Mike Smith a test drive on him and see if we can get a piece of it.”

At 15-1 on the morning line are Stealcase, who finished third in the Haskell, and Five Sixteen, who followed a fifth in the Belmont with a second to Street Life in the Curlin.

Five Sixteen, a gelded son of Invasor, will be ridden by Rosie Napravnik from post position 2.

Fast Falcon will be the 28th Travers starter for Hall of Fame trainer Nick Zito, who won the 2004 “Mid-Summer Derby” with Birdstone. Owned by Richard C. Pell, Fast Falcon was seventh in the Jim Dandy, which came on the heels of a solid second to Teeth of the Dog in the Grade 2 Dwyer on June 30 at Belmont.

“We think we fit pretty well, so we’re going to give it a whirl,” said Zito.

With Junior Alvarado aboard, the Awesome Again colt was tabbed at 20-1 on the morning line from post position 11.

“He’s going to be coming from behind anyway, so I hope it works out [leaving from the outside],” said Zito.

The longest shot on the morning line at 30-1 is Speightscity, who has not raced since finishing second to Apha in the Grade 3 Withers on February 4 at Aqueduct Racetrack. With Irad Ortiz, Jr. named to ride, the Speightstown colt drew the rail and will be sent to the lead, said trainer Gary Contessa.

“I don’t really want the rail, but it was the hand I was dealt, and we’re going to the lead,” said Contessa, who trains Speightscity for McConnell Racing and Team Stallion Racing. “Hansen’s not in here. I was kind of thinking about whether I wanted to go the lead or not, or whether I wanted to go head-and-head with Hansen or not, but from the rail, if all goes well, we will be on the lead.”