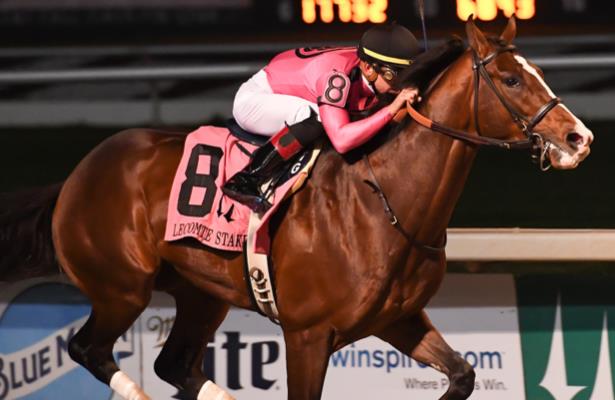 The Grade 2, $600,000 Jim Dandy, which is Saratoga’s main prep race for the Travers Stakes, attracted a competitive field of six for Saturday's renewal.

When Maximum Security won the Haskell Invitational (G1) and laid claim to the lead in the 3-year-old division, the Jim Dandy gained in importance beyond its place on the road to the Mid-Summer Derby.

Here's a closer look at contenders for the Jim Dandy, slated as Race 11 of 12 with post time scheduled for 6:51 p.m. ET. The projected morning line is provided by Horse Racing Nation.

1) Laughing Fox [ML 12-1 – Union Rags – S. Asmussen/R. Santana Jr. – 8: 3-0-0 - $388,018] Trainer Steve Asmussen has won the Jim Dandy twice in the past, including with last year’s second choice, Tenfold. Laughing Fox was seen most recently in the Preakness Stakes when he made an impressive rally from last, 25 lengths behind, to finish fifth beaten by just fewer than four lengths. Before that, he was the winner of the Oaklawn Invitational on Kentucky Derby weekend. He has shown a preference for racing from off the pace and typically is not as far behind as he was in the Preakness. Use underneath.

2) Tax [ML 6-1 – Arch – D. Gargan/I. Ortiz Jr. – 7: 2-2-1 - $426,300] One of four graded stakes winners in the field, the gelding picked his victory up on the Kentucky Derby trail in the Withers (G3) going this same distance at Aqueduct. He definitely prefers to press the early pace, but he also has the ability to carry his speed a distance of ground as he displayed when he ran fourth in the Belmont Stakes. With the composition of this field, he may be able to control the early proceedings. Live longshot.

3) Mihos [ML 15-1 – Cairo Prince – J. Jerkens/J. Alvarado – 5: 2-0-1 - $133,960] We heard his name early in the year when the Jimmy Jerkens trainee moved from a maiden victory at Aqueduct as a 2-year-old to winning the Mucho Macho Man at Gulfstream Park in January. Next start in the Holy Bull (G2) he had a disappointing fifth-place finish at odds of 5-2. Then Mihos was off for nine months until the Dwyer (G3) at Belmont Park on July 6, when he finished a non-threatening fourth just three weeks ago. It's difficult to include him in this strong but compact field. Toss.

4) Global Campaign [ML 3-1 – Curlin – S. Hough/L. Saez – 4: 3-0-0 - $228,480] His career record really tells the story of this talented 3-year-old. There is a horse who wins races when he can get to the starting gate. The $250,000 Keeneland yearling purchase has been plagued with foot problems that have frequently interrupted his training. When he can race, however, good things happen, like in his last start in the Peter Pan (G3) when he defeated eventual Belmont Stakes winner Sir Winston. He’s a serious threat to win if he doesn't scratch. Win contender.

5) Tacitus [ML 9-5 – Tapit – W. Mott/J. Ortiz – 6: 3-1-1 - $1,233,000] The big gray son of Tapit has never finished farther back than fourth, and that includes his Belmont runner-up, just a length behind the winner. He went into the Kentucky Derby on a three-race win streak that included the Wood Memorial (G2). In the Derby was placed third after the disqualification of Maximum Security. The Bill Mott barn is off to a very good start at Saratoga, and Tacitus certainly has a big chance to get through limited traffic in this nine-furlong tussle. Win contender.

6) War of Will [ML 2-1 – War Front – M. Casse/T. Gaffalione – 11: 4-1-1 - $1,491,569] With his victory in the second leg of the Triple Crown, he is the only Grade 1 winner in the field and the leading money winner. It just wasn't his day at the Belmont Stakes for the only horse to contend in all three legs of the Triple Crown. Mark Casse anticipated time off and training up to the Travers, so to see War of Will back this soon instills confidence.The son of War Front has always used his tactical speed to stay close to the pace and then pounce. Top choice.

Summary: Having drawn the No. 2 post position, Tax should be expected to go right to the lead, where jockey Irad Ortiz Jr. will try and control the pace.

The pace pressers in the field -- War of Will and Global Campaign -- will probably not let Tax race loose on the lead for long while Tacitus chases near them. These are three talented horses, and any one of them is capable of winning this race on their best day.