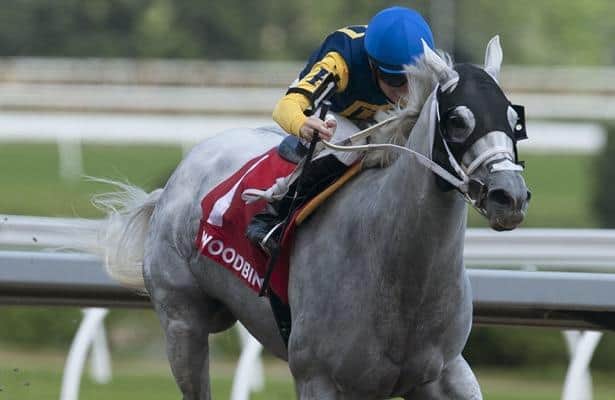 Jean Elizabeth earned her eighth consecutive stakes victory as she dominated her rivals in the Grade 3, $125,000 Whimsical Stakes on the first summer Sunday of the Woodbine meet.

The popular shipper returned to the scene of her Sweet Briar Too and Ontario Fashion (G3) wins that launched her current streak last fall for trainer Larry Rivelli and co-owners Richard Ravin and Patricia’s Hope LLC.

Leaving from inside of her nine foes in the six-furlong sprint for older fillies and mares, Jean Elizabeth darted out for a quick three-length lead and set fractions of :22.36 and :44.78 en route to victory in 1:09.86. Summer Sunday, Canada’s reigning Champion Female Sprinter, chased the winner most of the way and finished third as Painting closed late to steal the runner-up honors.

“She’s a rocket,” winning jockey David Moran said. “I wasn’t expecting her to be that quick with her ears pricked down the back.”

Moran noted the speedy mare was just toying with her rivals.

“She just pricks her ears and I think she just waits for a bit of company to go on again,” Moran said.

Jean Elizabeth, who set a stakes record last time out in February’s Lightning City at Tampa Bay Downs and is targeting the Breeders’ Cup Turf Sprint, paid $3.40 to win. The 5-year-old homebred daughter of Adios Charlie and Rooney Doodle now boasts a career record reading 15-4-2 from 21 starts and more than $680,000 in purse earnings.

Moran, who is a father of nine children with his wife Maria expecting in the coming weeks, took a moment after winning the first graded stakes of the meet to thank his kids for their Father’s Day cards and gifts and give a shout out to his own dad back home in Ireland.

He also went on to dedicate the race to a special horseman.

“I want to give a special mention today to Frank Forde – the backbone of horse racing here at Woodbine, one of the grooms – who passed away suddenly last week,” Moran said. “I’d like to dedicate this race to him.”