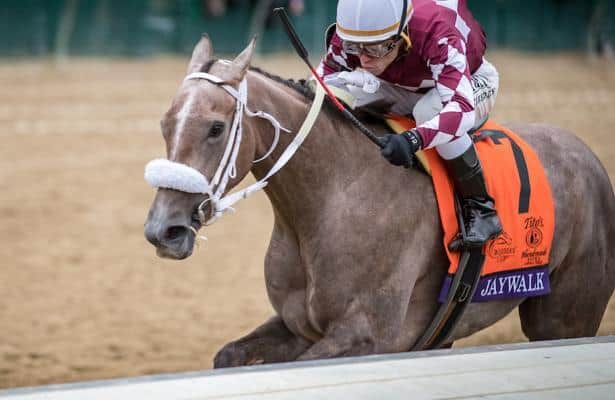 D. J. Stable and Cash is King’s Jaywalk, the leading contender to take home an Eclipse Award as this year’s champion 2-year-old filly, is expected to kick off her sophomore season during Gulfstream Park’s 2018-19 Championship Meet.

Jaywalk is currently getting some down time on the farm in Ocala, Fla, trainer John Servis said, after her win streak went to four races with a commanding 5 ½-length triumph in the Breeders’ Cup Juvenile Fillies.

“That was her fifth start as a 2-year-old, so we shut her down and sent her to Ocala to give her a little R and R. We’ll start her up toward the end of the year and start getting her ready for her 3-year-old campaign,” Servis said. “The first Grade 1 that we’ll point for will probably be the [Kentucky] Oaks. She’ll run once or twice at Gulfstream probably and either from there to the Oaks or from there to Keeneland and then the Oaks, depending on how she’s doing and where she’s at.”

Jaywalk debuted in a maiden special weight June 23 at Monmouth Park, finishing second to subsequent Schuylerville (G3) runner-up Nonna Madeline. From there, Jaywalk broke her maiden and won the White Clay Creek Stakes and Frizette (G1) before taking on nine rivals in the Breeders’ Cup.

“She trained so good going into the Breeders’ Cup. I’ll be honest with you, I didn’t know if she was good enough to beat those fillies,” Servis said. “There were some really good fillies in there and I told the owners going in, ‘She couldn’t be doing any better. It’s just a question of if she’s better than they are.’

"That’s what it came down to. She was running against the best in the country, you know?”

Gulfstream Park will host the Eclipse Awards for the seventh straight year in the Sport of Kings Theater on Thursday, Jan. 24.