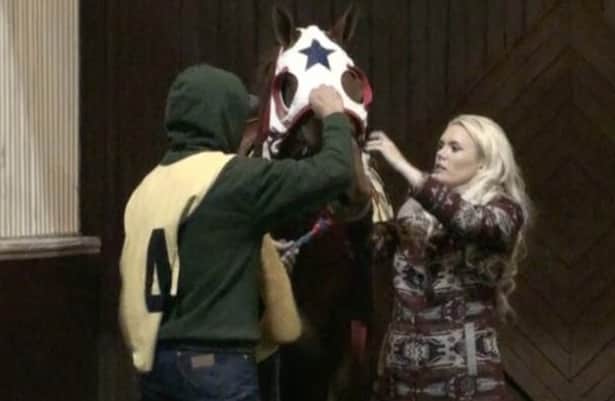 As Jaylan Clary embarks on her first full year as a Thoroughbred trainer, her thoughts are never far from the man who made it possible. That’s her dad, Mike Neatherlin, who died from COVID on Sept. 5 at age 65.

“I wouldn’t be who I am today without him,” the 27-year-old said recently.

Clary saddled her first horse as the trainer of record on Sept. 15, with El Pando winning a Remington Park maiden race. But she is no rookie. Clary helped her dad with his racehorses as well as handling the work on their farm and training facility in Brock, less than an hour from Lone Star Park. Father and daughter worked closely together, not only with Neatherlin's modest-sized racing stable but buying yearlings for resale as 2-year-olds through her Clary Bloodstock operation.

Clary has a dozen 2-year-olds to sell this year and 10 racehorses at Sam Houston, which kicked off Texas’ 2022 racing season on Jan. 6. Her Sam Houston contingent includes eight-time stakes-winner Mr Money Bags, the 2019 Texas Horse of the Year.

“We did everything together. My dad stayed at the racetrack. I have a little boy, so I stayed at home,” she said. “We have the privilege of having a track at the house for any horses that needed some time. We have paddocks, we have a training facility. We use it to break and prep to sell the babies and for the racehorses that need time. He’d be at the track and I’d take care of everything at home, and sometimes we’d switch.”

“He knew my career was going to be racehorses, so he helped me start my business. I sold his horses for him. That’s also how my brother (Lane Richardson) started out, then he branched out on his own and then my dad helped me. It’s something I plan to keep doing. The reason I have racehorses is because – say I don’t sell a 2-year-old, we always have the option of training and running them. We’ll sell them if the time comes, or we’ll keep them.”

Last year Mr Money Bags won four of eight starts, including the Gillispie Fairground’s GCFA Texas Bred Stakes on Aug. 28 in what proved Neatherlin’s final starter. Mr Money Bags subsequently had two seconds at Remington Park before the gelding won the Zia Park Sprint Stakes for Clary. He earned it the hard way, finishing in a dead heat for first but gaining sole victory after rival Competitive Idea was disqualified to second for interference.

“I’m so lucky to have a horse as tough as he is,” Clary said. “He doesn’t get pushed around by any horse. In his race replay, you could see he wasn’t going to let that horse win. It was a very emotional day. Every time Mrs. Cobb and I win, we cry. We cry together. Because she just lost Mr. Cobb and I lost my dad. So for both of us, we get emotional.”

Roy Cobb, of Mineral Wells, died in November 2020. Roy Cobb and Neatherlin were partners on other notable horses, including racing and ultimately privately selling future Breeders’ Cup Mile winner Kip Deville. Neatherlin also bought multiple graded-stakes winner Airoforce for $20,000 as a yearling before the partners resold him for $350,000 as a 2-year-old through Lane Richardson’s consignment.

But Mr Money Bags is the gift that keeps on giving.

“Mr Money Bags has opened up more doors for our family than is explainable,” Clary said. “We have worked with Mr. and Mrs. Cobb since I was a young girl. I take a lot of pride in Mr Money Bags. He meant a lot to my dad. That was the only horse my dad had that was Horse of the Year. My dad had really nice horses, but he’s always had to sell them. Mr Money Bags was something he got to train. He was the highlight of his training career, because he sold Kip Deville before he became Kip Deville. Mrs. Cobb herself means a lot to us. We’ve been through a lot with them, so many highs and lows and she’s always been right there. She’s an amazing lady. You don’t get any better.”

Clary said her father forged his own way on the racetrack, sleeping in stalls and tack rooms early on and never owning his own place until he was 50.

“He came from absolutely nothing, was one of 12 kids and the only one who chose to be a racehorse trainer,” Clary said. “He had to make it his own way. Every owner he got, he worked very hard for.

“My dad always prepared me for the worst. When he went to the hospital, we had a lot of babies at the time. He just said, ‘You’ve got to keep going.’ For about three weeks, when I got everything moved in to the track, he was able to talk to me. As soon as it was time to start running the horses, he went on the ventilator. I ran three times under his name, and then he passed away. It was hard, but in a way he fully prepared me. The past few years my dad always said, ‘I won’t always be here.’

“It was a hard transition. But as far as the horses go, our owners are just amazing. They never wavered. I’ve actually accumulated some new owners and the owners I had want to send me more horses. Some owners, when things happen, they find new trainers, more veteran trainers. Nobody has. I’m so thankful to have owners who believe in our program enough to know that it’s not gone with my dad. Everything he did, I’d do it just like him.”

Clary took over the stable at a time when Texas racing is launching a renaissance, thanks to the legislation passed that is boosting purses with revenue from the sales tax on horse feed and supplies.

“Passing that bill was such a great thing for Texas racing,” she said. “Texas in general thrives off of horses, whether it’s cutting, rodeoing, racing. Everything has gotten better in Texas because of that legislation, and it’s only going to get better on the sales side. I bought as many Texas-breds as I could, and I believe they’re going to sell well because they are Texas-breds. And look how much tougher the trainers are getting here. Some bigger trainers are coming to Texas because these are good purses.”