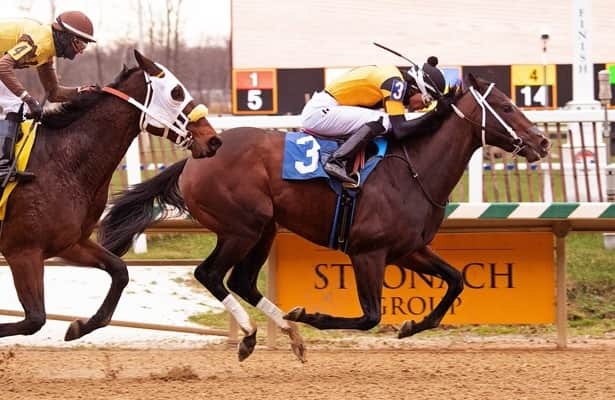 West Point Thoroughbreds and Melvin Delfiner’s Jaxon Traveler, pressed from the gate by stakes winner Singlino, shook off his pursuer at the top of the stretch and once again approaching the wire to remain undefeated with a ¾-length triumph in Saturday’s $100,000 Maryland Juvenile Futurity at Laurel Park.

The 39th running of the Futurity shared top billing on the nine-race program with Street Lute’s victory in the 34th renewal $100,000 Maryland Juvenile Filly Championship, both for Maryland-bred/sired horses sprinting seven furlongs.

Jaxon Traveler ($2.60) completed the distance in 1:25.07 over a fast main track to improve to 3-0 lifetime in his stakes debut. Based in New York with Hall of Fame trainer Steve Asmussen, he has raced exclusively in Maryland where he was bred by Dr. and Mrs. A. Leonard Pineau.

“It’s been a real treat to watch him develop. Each time he’s shipped down to Maryland he’s been a total professional,” said Dawn Lenert, West Point’s chief of marketing and director of partner relations. “We’re very lucky to have a horse like this. Our partners have come out to watch him and cheer for him, both here and on TV. It’s just been a super treat for them to be associated with this type of horse.”

The margin of victory was the smallest for Jaxon Traveler following a 10-length maiden special weight romp in debut Sept. 25 at Pimlico and a four-length optional claiming allowance score Oct. 23 at Laurel. All three of his wins have come in front-running fashion.

“This was the closest a horse had hounded him in his career and there was definitely a couple of nervous moments, but he showed his colors and stayed in front,” Lenert said. “He’s definitely a little more tired today than he’s been. I kept saying, ‘Where’s the wire?’”

Sent off at 1-5 in a field of seven, Jaxon Traveler had First State Dash winner Singlino at his right hip through a quarter-mile in 22.56 seconds and a half in 45.61, with Maryland Million Nursery runner-up Alwaysinahurry, Doubleoseven and Ain’t Da Beer Cold leading the second flight.

Jaxon Traveler and jockey Johan Rosado got the jump on Singlino turning into the stretch and created some separation before Singlino came with another surge. Latin Spice rallied to be third, followed by Ain’t Da Beer Cold, Alwaysinahurry, Doubleoseven and Hunter Joe.

“We’ll talk to Steve. I know we wanted to see how he did today at seven (furlongs),” Lenert said. “We could stretch him out in the Jerome going a mile; however, Laurel just put up that Spectacular Bid going seven furlongs in January. He proved he could go seven today, we’ll see what he does next time.”

Lucky 7 Stables’ Street Lute sat a perfect stalking trip before powering to the lead and pulling clear, avenging the only loss of her career with her second straight stakes victory and fourth overall in Saturday’s $100,000 Maryland Juvenile Filly Championship.

Ridden by Xavier Perez for trainer Jerry Robb, Street Lute ($6) is a neck shy of being undefeated through five starts, caught at the wire when second in the Oct. 24 Maryland Million Lassie by Miss Nondescript, who never threatened Saturday and finished seventh.

“Everything worked perfectly. Jerry was on the phone with me. He told me he wasn’t going to be able to make it,” Perez said. “The race before the horse went to the lead and kept going and he asked me to go the lead if we can without using her. That was the plan and then the other two horses went to the lead. I know my filly can settle and she did. We had just a perfect trip.”

Street Lute settled in third as Liam’s Missy, a 10 ¼-length maiden special weight winner last out at Belmont Park, and Lassie third-place finisher Trip to Freedom battled through splits of 22.70 and 45.29 seconds for the half. Perez tipped Street Lute to the center of the track once straightened for home and hit the wire 1 ¾ lengths in front.

Juror Number Four, fourth to Street Lute in the Small Wonder on Sept. 26 at Delaware Park, trailed the field early before coming with a late rally on the far outside for second. Maxine’s Tap Room, Buckey’s Charm, Targe, Liam’s Missy, Miss Nondescript, Heartful and Trip to Freedom completed the order of finish.

“She’s getting better. This week I was getting on her every morning and I got to know her a little more. She’s just improving every single day,” Perez said. “This means a lot because Jerry has stood by me for my ups and downs and he put me on the map again. I’ve been riding for him for three years now and he trusts me, and I trust him. Hopefully it stays like this for a long time.”