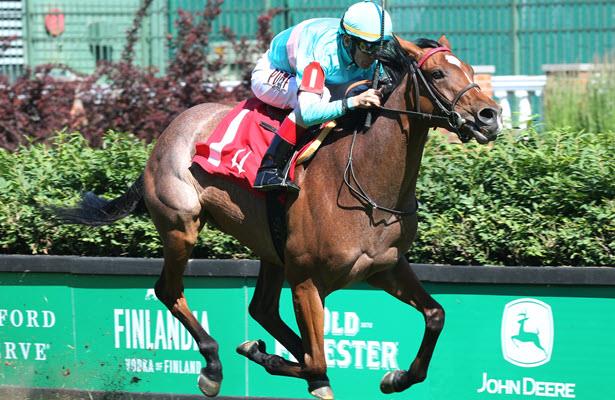 There are no less than ten graded races on the national stakes docket for Saturday, June 27, and the Grade 3 Regret Stakes might be the most competitive of them all.

A field of thirteen sophomore fillies are set to go a mile and an eighth on turf, and Crystal Cliffs is the morning line favorite for Graham Motion.

She is a solid threat in her second stateside start, but there are others capable of competing for the win in a wide open betting race. Before deciding how to bet Saturday’s 11th race from Churchill Downs, let’s meet the entire field.

#5 Crystal Cliffs (3-1) looked good rallying into tepid fractions in her winning stateside bow as the favorite on May 31. John Velazquez has been winning races with Graham Motion, and she is a solid contender if she avoids a bounce.

#1 Dominga (5-1) wired the field in her career debut in a turf route, but has been a closer since that race. She exits an uncomfortable trip in the Tepin Stakes, and fired a local turf bullet for this on June 21. She should be heard from late if the pace heats up for the productive Bridgmohan/Cox team. I am concerned that she seems to find trouble most of the time, but she has managed to capture half of her six starts.

#10 Harvey’s Lil Goil (5-1) was making nice progress before throwing in a clunker in the Fantasy Stakes (G3) May 1. The move back to turf is interesting. She rallied wide to finish 4th of 11 in her career debut in a turf route. Offspring of American Pharoah have been successful on turf, and dam has produced a turf winner. She showed tactical speed in her two main track victories, and that might be the key to her success. Her last four works were on the turf.

#11 Witez (12-1) stalked and finished 2nd behind Crystal Cliffs on May 31, and that was her third runner-up finish from four outings since breaking her maiden.

#12 Pass the Plate (6-1) was along for the show in the Tepin Stakes last time. She packs a decent late kick on turf and Julien Leparoux rides her well.

#2 His Glory (30-1) exits a local claiming turf route win for Brad Cox, and she was claimed out of that race for $50,000. Her new trainer Joe Sharp shows a profit in the graded ranks, and she is going to have to run faster to compete with this group.

#3 Stunning Sky (20-1) is a late runner for Mike Maker. She rallied for the show in the slow early/fast late Honey Rider Stakes at Gulfstream on May 2.

#4 In Good Spirits (8-1) set the pace in all three turf starts and won two of those races. She weakened in the stretch in the local Tepin Stakes at one mile May 23, and that was her first start in more than six months. She should be fitter this time and might get brave if able to control the pace.

#6 Micheline (8-1) rallied to post a 17-1 upset in the Honey Rider Stakes on May 2. She is a competent turf router from off the pace, and deserves some consideration if she can run two alike.

#7 Edgee Angel (20-1) followed up an all-weather maiden romp at Turfway on March 14 with a rallying show finish in a local entry level turf route on May 17. She needs to run faster to threaten these.

#8 Wexx (20-1) fired trifecta shots in five of eight turf tries, but is 0-for-3 with no top three finishes at Churchill. She needs to elevate her game under the Twin Spires.

#9 Eve of War (12-1) wired the field in two of four starts, and failed to fire both times she failed to make the early lead. She was stuck out in post 13 in the Tepin Stakes, and early trouble sunk her chances. Her new rider Florent Geroux might be on a send mission.

#13 Hendy Woods (15-1) completes the field for Mark Casse. She stalked and scored in both of her flat mile turf starts at Fair Grounds. She drew a tough post for a horse with stalking speed.