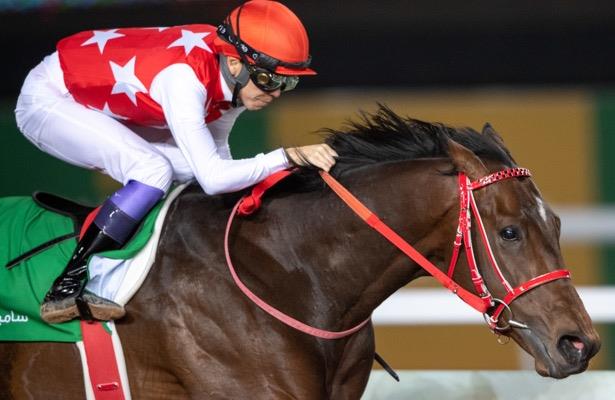 Full Flat, the Japanese-based colt who American fans last saw in the 2019 Breeders’ Cup Juvenile, scored a 14-1 upset Saturday in the $800,000 Saudi Derby.

The Saudi Derby, part of the undercard for the $20 million Saudi Cup, went a mile at King Abdulaziz Racetrack and featured 12 3-year-olds, plus 4-year-old filly Bella Fever, the 5-2 favorite.

Jockey Yutaka Take had Full Flat near the front early on as Rajee Allah set the early pace. The Speightstown colt moved alongside the pace setter in the turn and put a head in front coming into the stretch.

Full Flat was never threatened from there, stopping the clock in 1:37.91 and scoring by two lengths for a win that returned $31. Mishriff ran second, with Final Song coming home third.

Sierra Farm bred Full Flat in Kentucky. Trainer Hideyuki Mori purchased the colt as a yearling for $250,000 at the 2018 Keeneland September sale, and he made four of his first five career starts in Japan for owner Tsuyoshi Ono.

In Full Flat’s only previous race outside Japan, the colt was fifth of eight at 89-1 odds Nov. 1 in the Breeders’ Cup Juvenile at Santa Anita Park. Now he’s an international stakes winner, and, if he stays in the Middle East, could run for Kentucky Derby points March 28 in the UAE Derby.