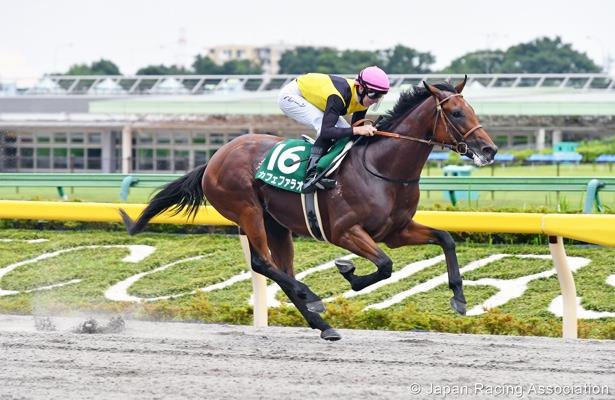 The extended version of the Japan Road to the Kentucky Derby wraps up on Wednesday with the 2,000-meter Japan Dirt Derby (G1) at Oi Racecourse, a prestigious event awarding 40 qualification points to the winner.

Scheduled as the 11th race of the day with a post time of 7:05 a.m. ET, The Japan Dirt Derby annually draws some of Japan’s best 3-year-old dirt horses, and the 2020 edition is no exception. Among the entries is the undefeated Cafe Pharoah, a clear favorite to reach the winner’s circle. Should this exciting son of American Pharoah wind up making a trip to Churchill Downs, he’ll rank as clearly the best horse Japan has ever sent to contest the Kentucky Derby.

#1 Aime Limite: Possibly the best of the NAR runners, Aime Limite showed tenacity to win the 2,000-meter Tokyo Derby at Oi Racecourse, hanging on to score by a neck in the decent time of 2:06.90. But Aime Limite was definitely running out of speed, finishing the final 600 meters in :39.20, and he’ll face a tough challenge from the JRA runners in the Japan Dirt Derby.

#2 Cafe Pharoah: Undefeated sensation has virtually locked up a spot in the Kentucky Derby starting gate after posting impressive victories in the Hyacinth and Unicorn (G3) on the Japan Road to the Kentucky Derby. A versatile son of American Pharoah capable of winning with any running style, Cafe Pharoah possesses tactical speed coupled with the ability to finish strongly down the stretch. Just check out his victory in the Unicorn—Cafe Pharoah pressed quick fractions of :23, :46.10, and 1:10.50, then powered clear through a final quarter in :24.40 to win by five lengths in 1:34.90.

In the Japan Dirt Derby, Cafe Pharoah will be stretching out beyond 1,600 meters, but that’s the only real question mark facing this abundantly talented colt. Assuming he handles the trip, this Triple Crown nominee should win for fun and stamp his ticket to Churchill Downs.

#3 Barnard Loop: Since finishing second behind Cafe Pharoah in their mutual debut, Barnard Loop has won three straight races, including the Hyogo Championship (a NAR Group 2) racing 1,870 meters. This Shadai Farm homebred can contend for a spot on the board with Japan’s leading rider Christophe Lemaire in the saddle, but he’s got a lot of form to find against Cafe Pharoah and will need to sharpen his finishing kick.

#4 Gold Bomber: Heavily-raced youngster has already started 15 times on the NAR circuit, but could only finish a distant fourth in the 1,800-meter Wakatake Prize at Oi Racecourse last month. The race elapsed in the modest time of 1:55.60 and Gold Bomber was weakening down the lane, so the Japan Dirt Derby looks like a tough assignment.

#5 Full Flat: Fifth in the 2019 Breeders’ Cup Juvenile (G1), Full Flat scored a decisive 2 1/4-length victory when traveling to Saudi Arabia for the Feb. 29 Samba Saudi Derby, a performance flattered when runner-up Mishriff returned to win the Prix de Jockey Club (G1, French Derby). But Full Flat was no match for Cafe Pharoah when finishing sixth in the Unicorn (G3) and will need to up his game while stretching out over a trip possibly longer than his best.

#6 Riko Seawolf: With five runner-up finishes from seven starts over the local course, Riko Seawolf has shown an affinity for Oi Racecourse, but also something of a disdain for reaching the winner’s circle. He was out-kicked to the finish line of an 1,800-meter event on June 24, weakening to finish 3 1/2 lengths behind the winner while hitting the wire in 1:55.70, so Riko Seawolf will need improvement to challenge against this field.

#7 Bravoure: Hasn’t missed the exacta in seven starts, including three runs at Oi Racecourse, and sprinted home in a solid :37.70 to finish second in the 1,800-meter Haneda Hai over this course on Apr. 29. Stretch-running colt won his two previous starts (both at Oi) in comfortable fashion and figures to be a threat from off the pace in the Japan Dirt Derby.

#8 Gamila’s Jackson: Son of Tokyo Yushun (G1, Japan Derby) winner Eishin Flash hails from a classy family, but he’s finished out of the money in 13 of his 17 starts, including a fifth-place effort in the Hyogo Championship. NAR runner will be among the longshots in this competitive field.

#9 Danon Pharaoh: Though Danon Pharaoh finished just a neck behind Barnard Loop in the Hyogo Championship, he’s struggled in his two previous runs on the Japan Road to the Kentucky Derby, finishing fifth in the Cattleya Sho and sixth in the Fukuryu Stakes. Most recently, Danon Pharaoh faded to 14th in the 1,800-meter Hosu Stakes at Kyoto, suggesting the son of American Pharoah will need a significant form reversal to challenge for victory on Wednesday.

#10 Kitano Octopus: Though Kitano Octopus was no match for Cafe Pharoah in the Unicorn, he wasn’t badly beaten by any means, sprinting home in a solid :36.90 to finish fifth. He missed the runner-up spot by just three lengths while pulling 2 1/2 lengths clear of Full Flat, so expect this JRA runner to be a factor at the finish of the Japan Dirt Derby. The 2,000-meter distance should be right up his alley, considering sire Fenomeno was a two-time winner of the 3,200-meter Tenno Sho Spring (G1).

#11 Miyaji Kokuo: Classy youngster has already made a name for himself on the Japan Road to the Kentucky Derby, finishing third in the Fukuryu Stakes traveling 1,800 meters at Nakayama. The son of Dubai World Cup (G1) champion Victoire Pisa was subsequently a runaway winner of the 1,800-meter Hosu Stakes at Kyoto, finishing in :37.60 to win by three lengths in the respectable time of 1:51. If anyone can challenge Cafe Pharoah, it might be Miyaji Kokuo.

#12 Daimei Corrida: Distant runner-up behind Miyaji Kokuo in the Hosu Stakes, Daimei Corrida has likewise made some noise on the Japan Road to the Kentucky Derby, employing pace-pressing tactics to finish third in the Cattleya Sho before weakening to ninth behind Cafe Pharoah in the Hyacinth. A Triple Crown nominee, Daimei Corrida will attempt to increase his points count in the Japan Dirt Derby, but he’s mathematically unable to catch Cafe Pharoah in the standings and probably needs a step forward to finish on the board.

#13 Causey Son Rad: Consistent NAR runner is stretching out substantially in distance after competing in a series of 1,200-meter sprints at Oi Racecourse. He’s won twice while demonstrating a decent turn-of-foot, but unless he relishes the added distance and gets a fast pace to work with, Causey Son Rad might be hard-pressed to contend against this caliber of competition.