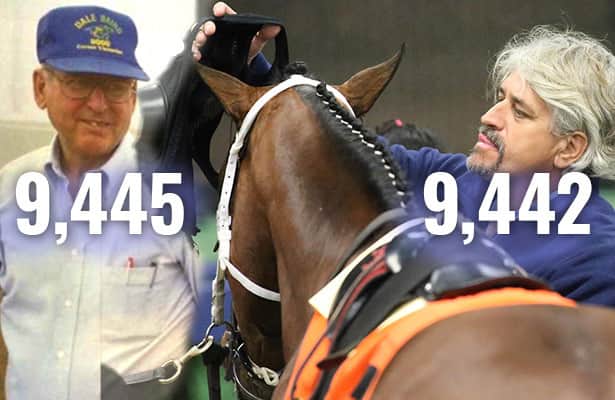 With two scores Sunday, Hall of Famer Steve Asmussen moved within three victories of tying the record for most Thoroughbred training wins in North American history.

The 3-year-old Jackie’s Warrior ran away to win the storm-delayed Amsterdam Stakes (G2) by 7 1/4 lengths at Saratoga, and 2-year-old colt Elusive Target was victorious in a maiden race at Ellis Park. Those results pushed Asmussen’s career win total to 9,442, according to Equibase. The current record of 9,445 was set by the late Dale Baird in career that spanned 1961-2007.

“Today was a day we felt very live,” Asmussen told New York Racing Association Communications. “We had 10 runners and two winners. They all ran well. Any day you have Jackie’s Warrior win the Amsterdam like that, you feel pretty good as a trainer. But we are three wins away, so we’ll have to pick up our slack at Louisiana Downs these next couple of days.”

That is where Asmussen has most of his starters Monday and Tuesday. On Monday he has three horses entered at as many different tracks. With morning-line odds, they include:

Asmussen is averaging 1.47 victories per day in 2021. That mathematically puts him on pace to break the record Wednesday, although a perfect day Monday would bring him even with Baird.

Five horses from the Asmussen stable were drawn into races at two tracks Tuesday, including one also-eligible entry. They are:

The world record is probably 1 1/2 years away for Asmussen. Based in Peru, trainer Juan Suárez Villarroel has 9,879 victories, including one Sunday, according to the website Página de Turf. Since last fall Suárez Villarroel has averaged about 0.75 wins per day, meaning Asmussen could catch him in early 2023 if both maintain their current win rates.

Kentucky Derby: See the odds after 1st day of Future Wager
With or without Mattress Mack’s money, Smile Happy...