Saratoga 2022: Jackie's Warrior will face 5 rivals in the Vanderbilt 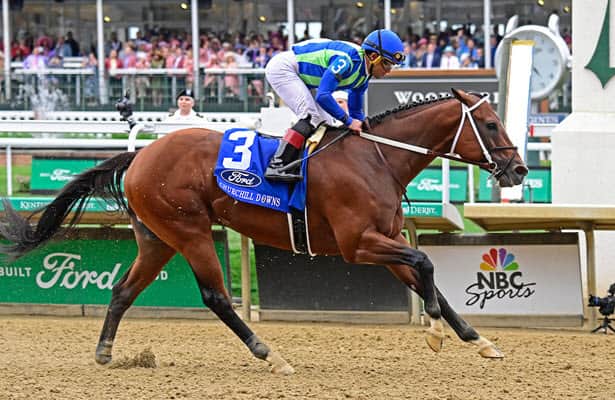 Reigning champion male sprinter Jackie’s Warrior will look to build upon an already stellar campaign when he takes on five challengers in Saturday’s Grade 1, $350,000 Alfred G. Vanderbilt Handicap, a six-furlong sprint for 3-year-olds and up at Saratoga.

“You can’t talk about Jackie’s Warrior without thanking (owners) Kirk and Judy Robison for putting him back in training,” said Hall of Fame trainer Steve Asmussen. “It’s so rare in this day and age for a champion colt to have another year at the racetrack and for him to have another chance at Saratoga.”

A bay son of Maclean’s Music, Jackie’s Warrior trumpeted his brilliance early on, sweeping his first four outings that included Grade 1 triumphs in the Hopeful at Saratoga and Champagne at Belmont Park, as well as the Saratoga Special (G2).

He started his sophomore season with a brief venture down the Kentucky Derby trail, finishing third in the Grade 3 Southwest (G3) at 1 1/16 miles before grinding out a victory in the Pat Day Mile (G2) on the Derby undercard. Jackie’s Warrior has been a force to be reckoned with since finding his best stride around one turn, cutting back to seven furlongs in the Woody Stephens (G1) at Belmont that spring and losing by a neck to Drain the Clock. He would get the better of that foe next out with a 7 1/4-length romp in the Amsterdam (G2) in August at Saratoga.

The marquee race of Jackie’s Warrior’s sophomore campaign was a memorable showdown with the esteemed Life Is Good in the H. Allen Jerkens Memorial (G1) at the Spa. Life Is Good took an early advantage but was collared in the final stages as Jackie’s Warrior showed a tremendous turn of foot and prevailed by a neck.

After a strong 6 3/4-length win in Parx Racing’s Gallant Bob (G3), an effort that garnered a career-best 110 Beyer Speed Figure, Jackie’s Warrior finished an uncharacteristic sixth in the Breeders’ Cup Sprint at Del Mar behind the victorious Aloha West to close out a campaign that saw him earn Eclipse Award honors.

He returned in April to kick off his 4-year-old campaign with authority, scoring a three-quarter-length win in the Count Fleet Sprint Handicap (G3) at Oaklawn en route to open-length triumphs in the Churchill Downs (G1) in May at its namesake track and most recently, the True North (G2) on June 10 at Belmont Park.

Now that Jackie’s Warrior has flourished as a sprinter, Asmussen said he is on a more targeted schedule this year with the ultimate goal being a return engagement in the Breeders' Cup Sprint in November at Keeneland.

"He was put back in training this year with the Breeders' Cup in mind. Last year, he started out in a two-turn race and defined himself in one-turn races," Asmussen said. "This year, we've had less racing to this point and a fresher horse. We're sure of what we want to do with him. We have three dominant victories and three races left on his calendar. We want to be purposeful and exact."

Jackie’s Warrior will put a perfect Saratoga record on the line as he attempts his fifth victory at the Spa.

“He’s 4-for-4 at Saratoga, all graded stakes. It’s a wonderful opportunity and we’re very much looking forward to it,” said Asmussen. “He’s an excellent horse and in interviews about him, you want to say something different, but he has just been consistently brilliant.”

Jackie's Warrior, assigned a field-high 127 pounds, will leave from post 4 under Joel Rosario, who has piloted Jackie’s Warrior for 14 of his 15 starts.

The accomplished Ny Traffic will try to play spoiler in his first start in Grade 1 company since finishing ninth in the 2020 Preakness for trainer Saffie Joseph Jr. Ny Traffic will seek his first top-level victory in his 20th lifetime start.

Bred in New York by Brian Culnan, the grey son of Cross Traffic nearly attained Grade 1 glory when defeated a nose by subsequent 2020 Kentucky Derby winner and Horse of the Year Authentic in that year’s edition of the Haskell Invitational. He went on to finish eighth in the Kentucky Derby and ninth in the Preakness.

Since then, the grey colt picked up another graded placing when second in the Salvator Mile (G3) last year and has relished a cutback to sprinting this year, posting two six-furlong stakes coups in the restricted Affirmed Success in April at Belmont and the Chocolate Town in June at Penn National facing open company. He was awarded Beyers of 100 and 97 for those efforts, respectively.

“Since we cut him back, he’s improved to run some fast numbers,” said Joseph, Jr. “Before, he was on the Derby trail and he kind of always didn’t finish up his longer races going a mile, a mile and an eighth. So, since we cut him back, that seems to be what he wants to do.”

Ny Traffic will carry 121 pounds from post 3 with Irad Ortiz Jr. aboard.

The dark bay son of Take Charge Indy kicked off his 6-year-old campaign with a game runner-up effort to Prevalence in the Commonwealth (G3) in April over a sloppy and sealed Keeneland main track. He finished a distant sixth to Jackie’s Warrior in the Churchill Downs and a close fourth in the listed Aristides before posting a third in allowance company last out sprinting 5 1/2 furlongs at Churchill.

With earnings in excess of $1 million, Long Range Toddy’s other graded placings were a pair of thirds in Grade 3 company in the 2019 Southwest and Ohio Derby. He will be ridden from post 5 by Luis Saez.

Kneedeepinsnow (post 1, Ricardo Santana Jr., 117 pounds) will look to go from claim to fame as he makes his third outing since being haltered for $80,000 out of a winning effort that garnered a career-best 100 Beyer in April at Keeneland.

Trained by Matt Shirer, the Flat Out gelding has picked up two stakes placings for his new connections, finishing second in the Work All Week in June at Hawthorne and third in the Kelly’s Landing 2 1/4 lengths behind Breeders’ Cup Sprint winner Aloha West last out on July 2 at Churchill.

Completing the field are the duo of Willy Boi and Doc Amster for conditioner Jorge Delgado. Willy Boi has a perfect 3-for-3 record since joining Delgado’s barn in April, and made the grade last out with a one-length score in the Smile Sprint (G3) on July 2 at Gulfstream Park.

Doc Amster returns on 13 day’s rest after taking a starter allowance by 4 3/4 lengths on July 17 at Monmouth Park. The son of Midshipman has made one appearance at graded level, finishing fourth in Gulfstream’s Mr. Prospector (G3) in December.

Willy Boi (120 pounds) will be ridden from post 2 by regular pilot Chantel Sutherland, while Doc Amster (116 pounds) will emerge from post 6 with Hall of Famer Javier Castellano in the irons.