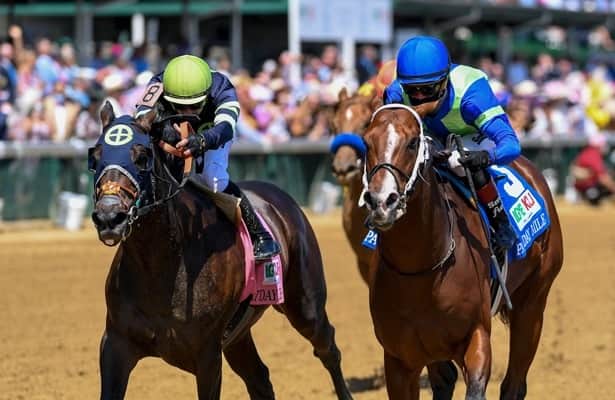 After two defeats at two turns, Jackie’s Warrior cut back to one turn in style Saturday with a game victory in Churchill Downs’ Grade 2, $500,000 Pat Day Mile Stakes.

Jackie’s Warrior led every step of the way, holding off a determined Dream Shake by a head. He set blistering fractions of 21.74 and 43.68 seconds under jockey Joel Rosario and hit the wire in a swift 1:34.39.

“I was just rooting. The racing fan takes over in you. You root a little bit. I’ve got a little crack in my voice right now. It was well worth it. It was just a great horse race. A tremendous horse race on paper and then they put it on the racetrack.”

The 97th running of the Pat Day Mile (GII) @ChurchillDowns R8 is won by a speedy ?? and determined Jackie's Warrior. Ridden masterfully by ????@JRosarioJockey and trained by Steve Asmussen.

Jackie’s Warrior started his career with four straight wins at one turn, including in Saratoga’s Hopeful Stakes (G1) and Belmont Park’s Champagne Stakes (G1), before running fourth in the Breeders’ Cup Juvenile and third in the Southwest Stakes (G3).

Rather than keep Jackie’s Warrior on the Kentucky Derby trail, Asmussen shortened him in distance and pointed for the Pat Day Mile on the Derby undercard. The move paid off as Rosario booted the 2-1 favorite home for a win that returned $6.60.

Another Asmussen trainee, Whiskey Double, hit the wire a head clear of Defunded for show honors.

“I was pretty confident that he was going to hang in down the stretch,” Rosario said of Jackie's Warrior. “He likes when a horse comes up to him and he really digs in. I was not worried about the fast early pace because he fights very hard down the stretch.”

Asmussen noted both the fractions that Jackie’s Warrior produced on the front end and his ability to then finish the job.

“I’m just proud of who Jackie’s Warrior is,” Asmussen said. “For him to run the race that he did under these circumstances validates what we’ve always believed in him.”

Jackie’s Warrior now sports a 7: 5-0-1 record with $868,964 in earnings. Asmussen did not commit to keeping the colt at one turn or to trying two again, saying he would discuss options with owners J. Kirk and Judy Robison.

“It’s quite obvious he’s just a special horse,” Asmussen said. “I think there are plenty of targets for him that will serve his greatest assets best.”

Second-place Dream Shake entered off runs of third in both the San Felipe Stakes (G2) and Santa Anita Derby (G1). He could have run later in the card in the Kentucky Derby, but trainer Peter Eurton opted instead for the Pat Day Mile.

“He showed speed out of the gate and I got terrific position,” Dream Shake jockey Flavien Prat said. “He was running well all the way around and I moved right up outside the winner. I thought I was going to catch him through the length of the stretch.

“I really thought I was going to get there. My horse ran too good to get beat.”