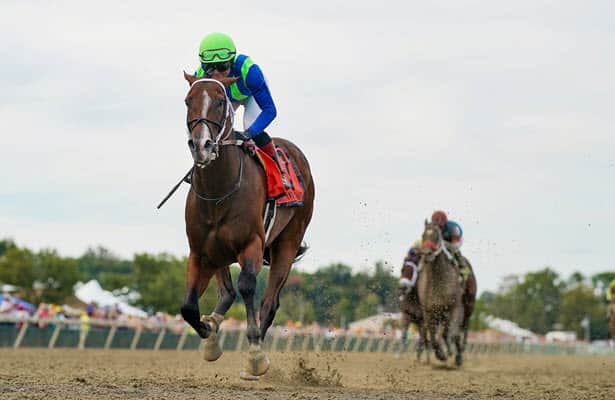 J. Kirk and Judy Robinson’s Jackie’s Warrior continued to make his case as the top 3-year-old sprinter with a dominating victory in the Grade 3 $300,000 Gallant Bob Stakes.

With Joel Rosario aboard, Jackie’s Warrior allowed Real Talk to briefly take the lead as they approached the first quarter in a quick 21.97 seconds. Jackie’s Warrior then quickly shook off his challenger through a 44.15 half-mile.

Coming through the stretch, Jackie’s Warrior was much in control in the race as Rosario looked around four times for the competition, then wrapped up on the colt for a 6 3/4-length victory while covering the six furlongs 1:08.64.

"That was nice,” Rosario said. “That is a nice horse, he was enjoying what he was doing out there. I mean, he is just a fast horse. He goes fast and he goes faster. I didn't have to ask him for much. Maybe in the beginning a little bit. Things are easy when you are on a horse like him. He was not tired at all."

The Gallant Bob was the third consecutive graded stakes victory for Jackie’s Warrior, who has now 4-of-6 races this year. This is also the seventh stakes victory that includes the H. Allen Jerkens Memorial Stakes at Saratoga where he finished a neck ahead of Life Is Good, who came back to win the Kelso Stakes at Belmont earlier on Saturday.

“He’s exciting to watch,” Asmussen said. “He’s very exciting to watch. What a very special horse he’s been. He’s run some game races and obviously we’re hoping it’s the ideal prep for the Breeders’ Cup Sprint. He ran so valiantly with Life Is Good. They both ran such a good race that day, we just felt that this race would give him more time to the Breeders Cup, and it was the right thing to do.”