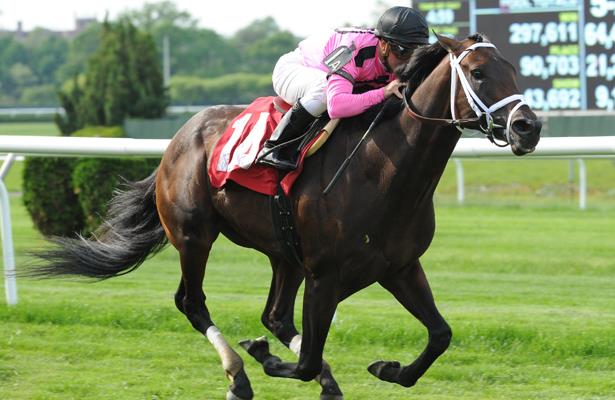 Gary Barber’s Jack Milton is set for a return to Gulfstream Park after a two-year absence to run in the $150,000 Canadian Turf (G3), one of eight stakes (seven graded) on Saturday’s 12-race program that will be highlighted by the $400,000 Besilu Stables Fountain of Youth (G2).

The Todd Pletcher-trained 5-year-old launched his career at Gulfstream on Jan. 15, 2013 with a 2 ½-length turf victory over War Dancer, who would go on to win multiple graded stakes, including a Virginia Derby (G2) decision over Jack Milton later that year. Jack Milton followed up his promising debut with a wide-trip second-place allowance finish three weeks later, never to return to Gulfstream while proceeding to compete in 10 stakes (nine graded) in his next 11 starts. The son of War Front captured the Transylvania (G3) at Keeneland in his first race away from Gulfstream and went on to become Grade 1 stakes-placed in the Secretariat at Arlington and the Jamaica Handicap at Belmont during his 2013 campaign.

Jack Milton started his 4-year-old campaign with a three-length allowance win at Churchill Downs and a 2 ¾-length triumph in the Poker (G3) at Belmont Park, dominating at a mile while closing strongly from off the pace.

“I think he’s the type of horse that’s really at his best when he’s allowed to settle and gets an honest pace up front,” said Pletcher, whose turf veteran is slated to face 13 rivals in the one-mile Canadian. “He’s got a pretty explosive kick in that scenario, so we’re looking forward to getting his season under way. He certainly looks well and he’s training super, so we’re hoping he comes back and has a big 5-year-old year.”

“We gave him a little freshening after the Atto Mile or the Woodbine Mile or whatever they call it these days. He seemed to tail off a little bit, which is not typical for him. We sent him to my dad’s farm for a little freshening and he’s come back in great form and he’s been training very well,” Pletcher said. “He’s shown in some of his races like the Poker that he’s capable of delivering a huge one.”

Scheduled to be ridden by Javier Castellano, Jack Milton will need to come off his five-month break in sharp form to prevail in a deep field of 13 that includes Gainesway Farm’s Ring Weekend, who has had success at Gulfstream in the past. The Graham Motion-trained gelding finished a close second in a maiden turf event at Gulfstream on Jan. 18, 2014 but truly found his stride on the main track Feb. 8 while scoring an impressive victory despite being forced to race extremely wide. The son of Tapit parlayed that maiden score into a Grade 2 triumph next time out in the Tampa Bay Derby that stamped him as a Triple Crown prospect. After a distant second-place finish in the Calder Derby, a fifth-place finish in the Preakness (G1) at Pimlico and a dismal performance in the Pegasus (G3) at Monmouth, Motion decided to switch the Gainesway homebred back to turf.

Ring Weekend responded with a second-place finish in the Sir Cat Stakes at Saratoga before posting back-to-back victories in the Saranac (G3) at Saratoga and the Hill Prince (G3) at Belmont. He completed his campaign with a sixth-place finish in the Twilight Derby (G2), in which he bobbled at the start from his outside post position and was beaten by only 1 ½ lengths.

After finishing off his 3-year-old campaign so successfully on turf, a return to dirt isn’t in Motion’s current plans for Ring Weekend.

“I think it’s possible, but I think it’s proven that he’s a superior grass horses to this point,” Motion said. “It’s most likely he’ll stay on the grass.”

Although Ring Weekend’s major successes on dirt and turf have come at 1 1/8 miles, Motion is confident that his gelding can adapt to the mile distance of the Canadian Turf.

“I think he can handle it. He has pretty good speed,” said Motion, who tabbed John Velazquez for the mount. “It seems like a logical starting point for him.”

Wachtel Stable and George Kerr’s Long On Value, who captured the Twilight Derby is also slated to make his 2015 debut in the Canadian Turf. The Bill Mott-trained 4-year-old will be looking to rebound from a seventh-place finish in the Mathis Brothers Mile (G2) at Santa Anita last time out.

Joel Rosario has the mount aboard the Virginia-bred son of Value Plus.

Robert Baker and William Mack’s Smooth Daddy, who finished behind Ring Weekend while checking in second in the Saranac and third in the Hill Prince, is set to make his second stakes start of Gulfstream’s Championship Meet in the Canadian Turf. The son of Scat Daddy finished a late-closing third in the Tropical Park Derby on Dec. 20. Trainer Tom Albertrani has named Luis Saez to ride the Kentucky-bred colt.

Joyce Young and Gerald McManis’ Sky Blazer prepped for the Canadian Turf on Jan. 16 with a last-to-first victory in a $100,000 optional claimer at 1 1/16 miles over the Gulfstream Turf.

“He ran very, very well. The race came up nicely for him, and he ran well and it all worked out very nicely,” trainer Barclay Tagg said. “A mile might be a little short for him, but we’ll see.”

Tagg is hoping jockey Rajiv Maragh is able to work out a ground-saving trip.

"I'd like him to be covered up a little bit, especially in the mile race. If we can cover him up a little bit, he has a nice finishing kick,” Tagg said. “Hopefully it’ll work out that way.”

Shadwell Stable’s Mutin, who edged Sky Blazer to win his U.S. debut at Aqueduct in November, is entered in the Canadian Turf. The Kiaran McLaughlin-trained 5-year-old and jockey Irad Ortiz Jr. will seek to make amends for a  10th-place finish from the No. 12 post in the Fort Lauderdale (G2) at Gulfstream on Jan. 10.

Grupo 7C Racing’s Grand Tito, who has held his own against blossoming turf star Mshawish in recent starts, is slated to contest the Canadian Turf. The Gustavo Delgado-trained 5-year-old fell just a neck shy of posting an upset over Mshawish in the Fort Lauderdale before faltering late in the Gulfstream Park Turf Handicap (G1) two weeks later to finish fifth, only 1 ½ lengths behind the heavily favored winner. Jose Ortiz is slated to ride the South Florida-based Grand Tito for the first time.

Excaper, a Grade 2 winner in Canada who set the pace before finishing second behind Mshawish in the El Prado at Gulfstream on Dec. 13; Mr. Online, who finished a close third in the 2014 Canadian Turf; and Guys Reward, an 8-year-old multiple-graded stakes winner; rate consideration on their respective peak career efforts.

Silver Freak, Aripeka, Best Plan Yet and Adirondack King round out the field. Ghareeb is a main-track-only entrant.