Ivan Fallunovalot back to work at Oaklawn 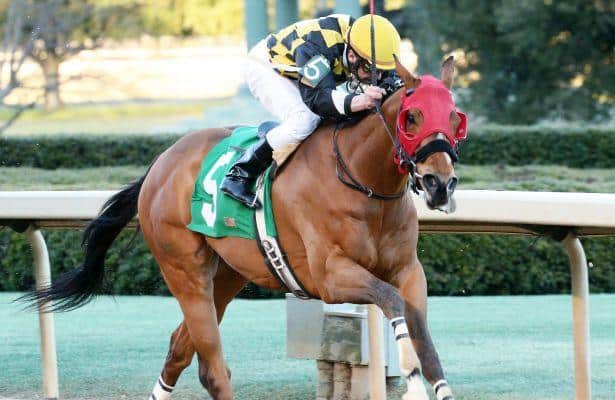 Photo: Coady Photography/Oaklawn Park
Lewis Mathews’ Ivan Fallunovalot returned to the track Thursday morning for the first time since finishing fourth in Saturday’s $125,000 King Cotton Stakes for older sprinters, trainer Tom Howard of Hot Springs said.
Howard said Ivan Fallunovalot, a 7-year-old Valid Expectations gelding, galloped two miles in advance of his next scheduled start, the $125,000 Hot Springs Stakes March 11. Bidding for a record third consecutive King Cotton victory, Ivan Fallunovalot was beaten four lengths by Storm Advisory, snapping a four-race winning streak.
Howard said Ivan Fallunovalot returned with a small abrasion on the inside of his left front leg, but, otherwise, emerged from the race in good shape physically.
“He hit himself, I guess,” Howard said Friday morning. “Got a little scratch on him that blew up. That’s the only reason we held him off for a couple of days, because he was so tender. No blood or anything.”
Howard said Ivan Fallunovalot normally returns to the track “a couple of days” following a race.
The King Cotton was Ivan Fallunovalot’s first start since the $250,000 Frank J. Francis Memorial Dash (G3) Nov. 19 at Laurel. Howard said the horse “just got tired” in the King Cotton, adding several missed days of training late last year (minor illness) might have contributed to the sluggish performance.
“He just didn’t have the stamina to deal with a good field,” Howard said. “Go on with the plan. I wanted that one, though. But it didn’t happen.”
Ivan Fallunovalot’s major spring objective is the $400,000 Count Fleet Sprint Handicap (G3) April 15.
A $25,000 claim at the 2014 Oaklawn meeting, Ivan Fallunovalot has won 15 of 25 career starts and earned $807,058.
Also pointing for the Hot Springs are Storm Advisory, millionaire Alsvid and Whitmore, who won a Jan. 15 allowance/optional claimer in 1:08.81 for 6 furlongs.
Whitmore’s time was the fastest in Oaklawn history for 6 furlongs during January.
Alsvid won a Jan. 26 allowance/optional claimer in his 2017 debut for Chris Hartman, Oaklawn’s leading trainer in 2015.
Homegrown Girl
Almost 50 years after he first attended Oaklawn, Allen Poindexter will have a chance at his most lucrative local victory when Chanel’s Legacy runs in Saturday’s $125,000 Martha Washington Stakes for 3-year-old fillies. Poindexter raised the Iowa-bred Chanel’s Legacy on his 60-acre farm in Rogersville, Mo., where he also resides.
A prominent breeder nationally, Poindexter, 68, normally sells his high-end prospects at prestigious yearling or 2-year-old sales. The owner, who has approximately 60 broodmares, sold a Medaglia d’Oro colt for $600,000 at last May’s Fasig-Tipton Midlantic 2-year-olds in training sale.
“The reason we can race is because of sales, because racing is a tough business,” Poindexter said. “I tell people, ‘I sell the best and keep the rest.’ I’ll probably never have a great horse, even though I think Chanel’s Legacy could be. I really think she is going to be special. I think we’ve only scratched the surface with her.”
Chanel’s Legacy won the $125,000 Dixie Belle Stakes Jan. 21 in her last start.
Poindexter and his longtime trainer, Lynn Chleboard, also teamed to win the Dixie Belle in 2013 with American Sugar.
Top horses Poindexter has bred include Miss Mischief, a Sovereign Award winner as Canada’s champion older mare and champion female sprinter of 2015; multiple graded stakes winner Isotherm; and Cool Arrow, winner of the $300,000 Springboard Mile Dec. 11 at Remington Park.
Poindexter was Oaklawn’s leading owner in 2010 and has ranked in the top 100 nationally in victories the last decade.
He said he first attended Oaklawn around 1970 when he was working on a Mississippi River oil refinery. Poindexter said he was encouraged to visit the track by his foreman, who was from Russellville, Ark., about 70 miles north of Hot Springs.
“After I went, I said, ‘One of these days I’m going to own race horses,’ ” Poindexter said. “I think I got my first one in like 1985, and now I have approximately 200. So it all started at Oaklawn Park.”
Poindexter’s primary business is Allen’s Mechanical, a plumbing, heating and air conditioning company that specializes in large commercial projects.
Finish Lines

The track was rated fast for workouts Friday morning. Grade 1-placed sprinter Jazzy Times worked a half-mile in :48.20 minutes after the track opened for trainer Brad Cox. Jazzy Times, in his first start for Cox, finished sixth in a third-level allowance race Jan. 28 after getting hooked in a speed duel. “Just kind of fell apart there, but hopefully we’ll get to run him in a few weeks,” Cox said Thursday afternoon. … Cox saddled two winners Thursday – Bluegrass Fields ($10) in the second race and favored Weast Hill ($2.80) in the eighth race, a conditioned allowance sprint for Arkansas-breds. Weast Hill, under Joe Rocco Jr., moved to 7 for 7 at Oaklawn with a half-length victory. The 5-year-old Rockport Harbor gelding, bred and owned by Starsky Weast of Star City, Ark., has earned $341,000 at Oaklawn. Weast Hill has won 8 of 11 starts and $371,210 overall. Cox said Weast Hill will be pointed for the $100,000 Nodouble Stakes Feb. 25, a 6-furlong state-bred race the gelding won last year. … Cox said Dazzling Gem, fourth in last year’s $1 million Arkansas Derby (G1) at Oaklawn, is “possible” for the $500,000 Razorback Handicap (G3) Feb. 20. Dazzling Gem is also under consideration for the $125,000 Mineshaft Handicap (G3) Feb. 25 at Fair Grounds, Cox said. Dazzling Gem is owned by Steve Landers, a member of the Arkansas Racing Commission. … Half Dome Dude ($2.60) was shortest-priced winner of the meeting in Thursday’s third race for leading trainer Robertino Diodoro. … Alex Birzer recorded his 2,993rd career North American victory in Thursday’s fourth race aboard Silver Bullion ($13), according to Equibase, racing’s official data gathering organization. … Silver Bullion represented the 297th career Oaklawn victory for Hall of Fame trainer D. Wayne Lukas and his third at the meeting with a Triple Crown nominee for Calumet Farm (Brad Kelley). Silver Bullion (by Pioneerof the Nile), follows Dilettante (Unbridled’s Song) and Horse Fly (Mineshaft) for Lukas and Calumet. Lukas, Oaklawn’s leading trainer in 1987 and 2011, has five victories at the meet. … Eurodevilwoman ($7) stretched her winning streak to four in Thursday’s seventh race (allowance/optional claiming sprint for older fillies and mares) for Hall of Fame trainer Jack Van Berg.