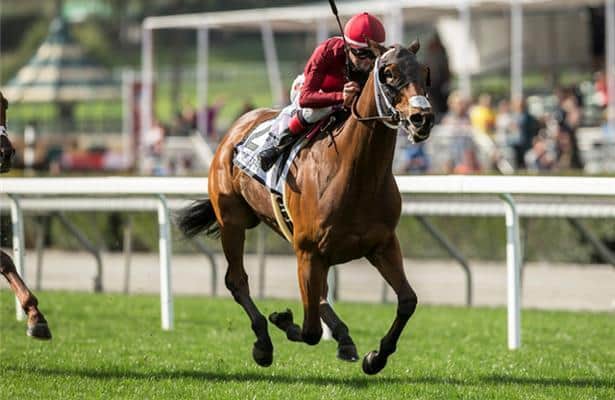 Photo: Benoit
Although a close third in his most recent graded stakes assignment in Kentucky, trainer Jeff Mullins’ Itsinthepost appears well positioned to reassert his dominance over the Southern California turf division as heads a field of eight 3-year-olds and up in Saturday’s Grade II, $200,000 Charles Whittingham Stakes, to be contested at a mile and a quarter over the Santa Anita turf.  A winner of three consecutive graded turf stakes earlier this year, French-bred Itsinthpost was beaten three quarters of a length as the 2-1 favorite going a mile and a half in a Grade II Stakes at Keeneland April 21.
California-bred What a View broke a three-game skid with a gate to wire score going a mile on turf in the Grade III American Stakes April 21 and he’ll try to stretch his speed an extra quarter mile in the Whittingham.
Third to What a View in the American, Kenjisstorm makes his third start for trainer Richard Baltas on Saturday, while Phil D’Amato’s Irish-bred Syntax returns from Northern California in search of a hot pace.
ITSINTHEPOST

A gem of consistency, this 6-year-old gelding has had a remarkable run since joining the Mullins stable in April, 2016, winning eight of his 19 starts there—including six graded stakes.  A winner of the Grade II San Gabriel Stakes Jan. 6, the Grade II San Marcos Stakes Feb. 3 and the Grade II San Luis Rey Stakes March 24, at turf distances of 1 1/8 miles, 1 ¼ miles and 1 ½ miles, Itsinthepost has clearly established himself at the top of the local turf class.  A horse who tends to wait on his competition if he makes the lead too soon, it’ll once again be up to Tyler Baze to time his move right in what will be his 27th try aboard the Red Baron’s Barn color bearer.  With an overall mark of 34-9-7-6, Itsinthepost has earnings of $1,120,712.
WHAT A VIEW

A Grade I winner at one mile on turf, What a View’s connections considered running in Monday’s Grade I Shoemaker Mile, but opted instead to stretch his considerable speed out an extra quarter mile in the Whittingham.  Deftly managed by Black over parts of four racing seasons, this 7-year-old California-bred gelding by Vronsky would eclipse the $1 million mark in earnings with a victory on Saturday.  With an overall mark of 24-8-5-0, What a View has earnings of $885,361 and he’ll be trying a mile and a quarter for the first time.
KENJISSTORM

A 6-year-old full horse by Stormy Atlantic, he comes off a third place finish, beaten 1 ¾ lengths by What a View, in the Grade III, one mile turf American Stakes here on April 21.  A sharp classified allowance winner going a mile on turf two starts back in his first start in his first start for Baltas March 29, Kenjisstorm was a close second in his only try at a mile and a quarter on turf—a first condition allowance some 16 starts back in January, 2016.  With Flavien Prat set to ride him back for the third consecutive time, he figures to be close to the early pace which could likely be set by What a View.  With an overall mark of 30-5-4-3, Kenjisstorm is still in search of his first graded stakes victory.
SYNTAX

A fast finishing fourth in the Grade III San Francisco Mile (turf) on March 31 at Golden Gate Fields, Irish-bred Syntax, who was third, beaten a half length in last year’s Whittingham, will be making his third start off a long layoff and could be sitting on a huge effort from off the pace.  Ridden by upstart Geovanni Franco in his last two starts (fourth in the Grade I Frank E. Kilroe Mile March 10), Syntax seeks his first Grade I win and his second graded stakes victory in the Whittingham.
THE GRADE II CHARLES WHITTINGHAM STAKES WITH JOCKEYS & WEIGHTS IN POST POSITION ORDER
Race 6 of 9 - Approximate post time 3 p.m. PT
1. Flamboyant—Brice Blanc—121
2. Full of Luck—Drayden Van Dyke—123
3. Frank Conversation—Mario Gutierrez—121
4. What a View—Stewart Elliott—121
5. Kenjisstorm—Flavien Prat—121
6. Itsinthepost—Tyler Baze--125
7. Ritzy A.P.—Gary Stevens—121
8. Syntax—Geovanni Franco--121
Note:  Named for the legendary “Bald Eagle,” the Charles Whittingham honors the memory of Santa Anita’s all-time leading stakes winning trainer who at the time of his passing in April, 1999, had 204 added money victories at The Great Race Place, 48 more than Bobby Frankel.  Known as the Hollywood Invitational from 1969 through 2012 at Hollywood Park, the race was won by Whittingham-trained horses a record seven times, beginning with Fiddle Isle in 1970, through Rivlia in 1987.
Itsinthepost Ritzy A. P. Syntax Flamboyant Kenjisstorm Frank Conversation Full Of Luck What A View Santa Anita Park Charles Whittingham Stakes Charles Whittingham Stakes (2018)