'It's been a big help'; Garcia teams up with Baffert barn at Oaklawn 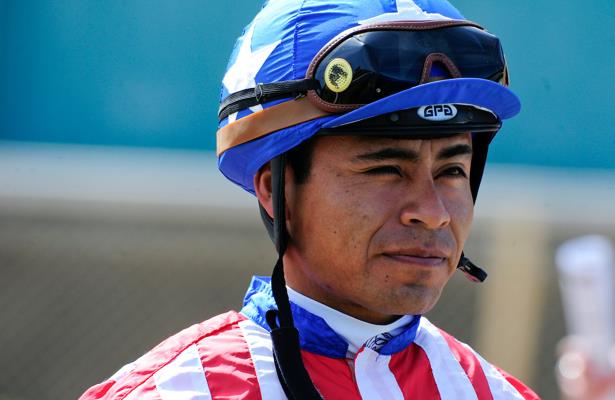 Eight Rings, in company, recorded a five-furlong bullet out of the gate in 59 seconds for Hall of Fame trainer Bob Baffert, who is pointing the Grade 1 winner for the $100,000 Bachelor Stakes at six furlongs April 25.

Eight Rings, unraced since a sixth-place finish in the Breeders’ Cup Juvenile on Nov. 1 at Santa Anita, breezed after the first surface renovation break under Martin Garcia, Baffert’s former go-to rider in Southern California who is riding regularly at Oaklawn for the first time this year.

“I heard we ended up working with a pretty good horse,” Jimmy Barnes, Baffert’s traveling assistant, said after Eight Rings returned to the barn. “He hasn’t run since the Breeders’ Cup and California, we had some wet weather, so (Baffert) wasn’t able to work him before he left, so then this was our scheduled breeze. It’s not uncommon to see us go to the gate off a layoff to make sure we’re ready.”

Eight Rings had been poised for an Eclipse Award as the country’s champion 2-year-old male after winning the American Pharoah Stakes (G1) on Sept. 27 at Santa Anita. The son of Empire Maker was purchased for $520,000 at the 2018 Keeneland September Yearling Sale.

“It helps to have Martin here,” Barnes said. “It’s been a big help. He knows our horses so well. He knows how Bob wants them worked. You go out there with a lot of confidence.”

“She worked phenomenal,” Baze said after getting on Venetian Harbor for the first time. “He (Baltas) said just cruise the five-eighths and make sure she gets something out of it – galloping out. She galloped out in 1:12 and change, 1:25, 1:38, something like that. She’s something special. Very nice filly.”

Aimee Dollase, who oversees Baltas’ Oaklawn string, termed the work “perfect,” adding Venetian Harbor will probably work a half mile next week in preparation for the 1 1/16-mile Fantasy, which is also expected to attract, among others, 2-year-old filly champion British Idiom.

A daughter of Munnings, Venetian Harbor has won two of three starts overall. She broke her maiden by 10 ¾ lengths Dec. 29 at Santa Anita and was a 9 ¼-length winner of her last start, the Las Virgenes Stakes (G2), on Feb. 8 at Santa Anita.