It's a go: King Guillermo nominated to Triple Crown series 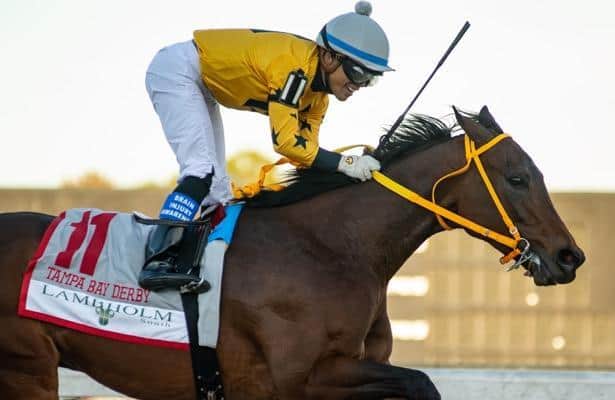 Victoria’s Ranch’s King Guillermo, the 49-1 upset winner of last Saturday’s Tampa Bay Derby (G2), has been nominated to the Triple Crown series with a $6,000 late payment that was received and processed on Tuesday.

The late nomination phase for the Triple Crown closes March 30.

With Victoria Ranch’s late $6,000 payment to nominate to the Triple Crown, King Guillermo has been adjusted to No. 5 on the Road to the 2020 Kentucky Derby Leaderboard.

Owners can still nominate their 3-year-old horses to the Triple Crown series – the $3 million Derby, $1.5 million Preakness Stakes and $1.5 million Belmont Stakes – by making a $6,000 payment through the end of the month.

Three-year-olds that were not nominated to the Triple Crown during either the early or late nomination phases also can become eligible for the races through payment of a supplemental nomination fee due at the time of each race’s entry: the Kentucky Derby ($200,000), Preakness Stakes ($150,000) and Belmont Stakes ($50,000).

King Guillermo merited the late nomination payment following his eye-catching, 4 3/4-length victory in last Saturday's Tampa Bay Derby, which was his second win from four career starts for trainer Juan Carlos Avila. He will be trained up to the Kentucky Derby.

By Uncle Mo out of the Dixieland Band mare, King Guillermo races in the colors of five-time Major League Baseball all-star Victor Martinez. He was purchased for $150,000 at auction last year.