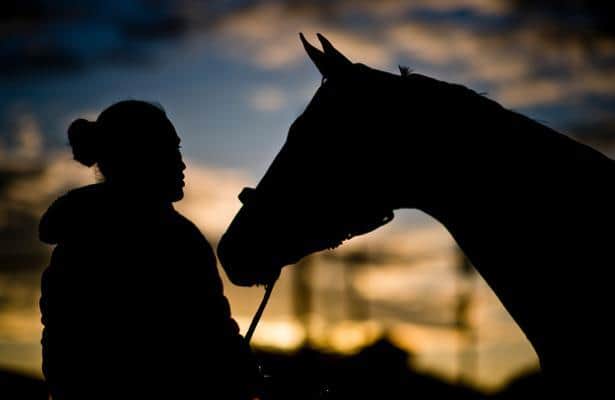 A gelding by Ole Rebel, he earned $59,795 on the Louisiana racing circuit, including a five-furlong maiden-breaking jaunt at Louisiana Downs in his fourth start. Ole Doc finished out the year on a furious run, hitting the board in eight of 12 starts. He visited the winner’s circle four times.

A downward trend developed, however, to close the horse’s career. He didn’t win over his final 10 races and missed the board Jan. 3 while running with a $4,000 claiming price. By the time he made his final start at Delta Downs, Ole Doc had competed in the care of five trainers.

Instead of a free, frolicking post-race life, Ole Doc’s fate was a musty truck awaiting him on the backstretch. There, he rode in a cramped cell to Thompson’s Horse Lot & Co. in Pitkin, Louisiana. He and 10 other horses were marked to be direct shipped to Mexico for slaughter.

Thompson’s is known as a “kill pen” in the equine world, and it’s one of many in the United States where an estimated 10,000 thoroughbreds are brought annually for eventual transport to the border, where meat suppliers will pay the operator for the horse to be slaughtered for the public consumption of meat abroad.

“It’s sick,” said Dina Alborano, who heads the award-winning nonprofit icareihelp, which rescues horses and seeks new, adopted homes after their racing careers. “This horse just got off the track a week ago, and now he’s in a kill lot.”

Alborano, who spearheaded a social media campaign to help pay the bail price and set free what she now refers to as “the Louisiana Eleven,” has witnessed what could very well be the darkest side of horse racing.

“They pack these horses — probably 50 in a trailer that’s suited for 12 — and they bring them to the Mexican border and they get the price-per-pound,” she said.  “The other group goes up to Quebec, and they say that the meat is being sold overseas now in Britain, Asia and a few other places. For some reason, they have the right to just go to the border with these truckloads of horses.

“It’s not happening in America, and that’s where a lot of people are under the assumption that there’s no horse slaughter in America because it’s not allowed, but it’s happening. The kill lot people will tell you right up front that it is happening. [Thompson’s] lot told me I had until 6 o’clock to pay the bail or the horses would be shipped.”

Ole Doc and the other 10 horses were spared at the final hour thanks to donations by names such as Ahmed Zayat, Graham Motion, Richard Papiese, Richard Migliore and even Erik Johnson, a star player for the NHL’s Colorado Avalanche and racing fan.

I'm completely BLOWN away!!!! Colorado Avalanche superstar , Erik Johnson just took us home with bail for Ole Doc Thank you so so much @6ErikJohnson ???????? WOW!!! pic.twitter.com/IozGcLc90s

The bruised and battered horses were quarantined, treated and set free at Parker Training Facility in Farmerville, Louisiana, which is a three-hour trip from Pitkin.

“It was $9,400 to get them out and another $1,000 to ship them and another $350 for each horse to quarantine,” Alborano said funds needed to save the Eleven. “The grand total for the whole thing was $32,000. It was the people, not the industry coming together.”

“I saw it on Twitter. I’m always on the lookout,” said two-time Breeders’ Cup and 2011 Kentucky Derby-winning trainer Graham Motion. “We, as an operation, try to be proactive about helping with causes like that. Certainly, the placing of horses when their racing days are over is high on that list of priorities.”

Thank you to EVERYONE who sent blankets for our Texas Nine and Louisiana Eleven They are loving LIFE thanks to each and every donor ??????@chiefmucker @neal_cfneal9 pic.twitter.com/MdlkwveQec

The last American horse slaughterhouses were closed in 2007 as every state implemented laws prohibiting the selling and processing of horse meat. In September of 2011, the American Horse Slaughter Prevention Act was introduced to congress. The bill prohibited, among other things, the shipping and transporting of horses and other equines to be slaughtered for human consumption. It was never enacted.

According to the ASPCA, from 2012-2016, an average of 137,000 American horses a year are taken to the border to both Canadian and Mexican slaughterhouses.

In the case of Thoroughbreds, Standardbreds and Quarter Horses, it’s the equivalent of scrapping an old, high mileage car not fit to resell for parts. Like your junked car, these horses are sold over to the kill lots — sometimes just after their final race — for a small price.

“The trainer or owner whose horse is in these lower-level claimers is basically getting about $150 to $300 dollars for their horse,” Alborano said of the process. “The middle man that pays for the horse then sends the horse to the kill lot, where he in turn gets the price-per-meat, so he’s getting about, maybe $100 dollars extra.

“These people in the lots are escalating the bail prices to people like us who are emotional about the thoroughbred horses being slaughtered. They’ll charge up to maybe $950 to $1,000 dollars. If they don’t get it from us, they’re still going to get it at the border for the meat price. They’re always going to make at least a hundred extra dollars per horse, so they’re always getting profit off of about 20 or 30 of them a day. It’s almost like flipping.”

Some TLC for our little buddy from the "Louisiana Eleven" as he gets this old cut treated for the 3rd day. Papa Hal @HalParker9 takes the best care of them during QT???? pic.twitter.com/JbDawYQ2Z0

But instead of cars or houses, these are former racing athletes connections saw as a non-competing liability.

Alborano said some horses leave the racetrack under the label “direct ship,” meaning they won’t make the public listing at kill lots — a method that often keeps actions by the trainer and owner anonymous.

“If it wasn’t for me receiving an anonymous tip on Twitter, I would have never been able to post the bail for those horses,” Alborano said. “Direct ship never comes to the public eye. They’re hidden in the dark alley ways and trenches of these kill lots — or auction sites — as they are proposed to be, and they ship immediately.  The public doesn’t get to see them.

“I’m thinking that the trainers and the owners from the backstretch of these low-grade tracks are paying extra money, just so their horse isn’t shown to the public or on Facebook or Twitter.”

With Alborano having brought the matter to light via social media, Delta Downs issued the following statement on Twitter: “We have a zero-tolerance policy when it comes to the sale of horses to slaughter. If we have proof that this policy was knowingly violated, we will permanently revoke their stall privileges.”

Recent actions with the kill pens have occurred even with Thoroughbred aftercare a more prevalent topic than ever. Alborano will continue advocating for better lives off the track for both racing’s stars and the average claiming horse.

“I’m sorry that it happens. I’m sad that it happens,” Motion said. “I hope, and I don’t think that it happens as much as it used to. I think we’ve become much more conscious of it as a business and as a sport. We’re more aware of it than we used to be, and it is important that we are.”

Anthony Jaskulski is author of Horse Racing Nation's "Across the Board" blog.