‘It’s been crazy’; How TVG, Fox Sports adjusted to a pandemic 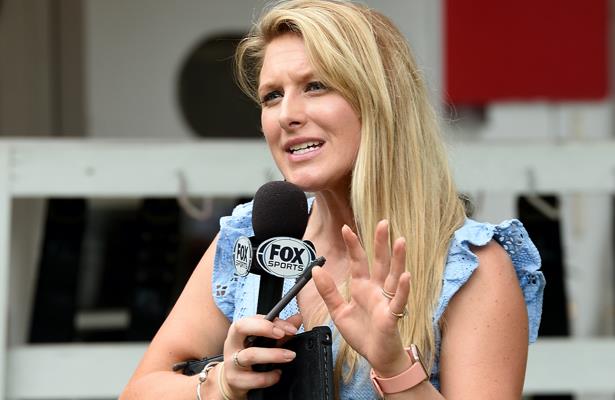 They may be rivals competing for a core racing audience, not to mention newcomers jonesing for a sports bet. But with their pandemic-era telecasts, TVG and Fox Sports do have a common enemy.

“Latency within the video and audio world.”

“It just feels like an eternity when you’re watching it on television.”

The delay. Oh, that infernal delay.

Anyone who has watched an improvised, at-home telecast or been in a Zoom conference for work or on a Skype call with a relative might have used more florid language to describe it.

“It’s been crazy,” said Allevato, whose New York Racing Association TV team produces the Fox Sports telecasts. “During the winter, our production truck was in New York, the races were from Arkansas and Florida and the TV announcers were working from Los Angeles or from their homes in other parts of the country. It was really kind of a mishmash of trying to get on the air.”

Yet they continue to pull it off, sometimes with a little more varnish than one might expect when world communications are afflicted with sentence-interruptus.

Races are still getting on the air seamlessly, they are being analyzed by credible experts, and they are being consumed by more people than the most cockeyed optimist might have forecast. The Associated Press reported in mid-April that TV ratings for horse racing on NBCSN and the combination of FS1 and FS2 were up 206 percent from the same time last year.

All the while, “Trackside Live” and “America’s Day At the Races” are cobbling together weekend shows with skeleton crews that are often working from home or at double arms’ length in underpopulated studios.

There are differences, the most obvious of which are the tracks they cover. Under a new agreement, the Fox Sports outlets and regional cable channels such as MSG+ have exclusive rights to show Belmont Park and Churchill Downs. Without those tracks, TVG and NBCSN are focused primarily on The Stronach Group venues – Santa Anita, Golden Gate Fields, Gulfstream Park and Laurel Park.

But the distinctions between “Trackside Live” and “America’s Day At the Races” do not end there.


Anyone who has grown comfortable watching TVG knows that the NBCSN racing shows are just simulcasts – with some twists.

“We primarily cater to the wagering public,” said Grigsby, who has been with TVG since its 1999 launch. “NBCSN is more so into storytelling. What we are trying to do is try to find that balance between the two.”

It means that hosts like Mike Joyce, Joaquin Jaime and Todd Schrupp and even the on-screen graphics package are more focused on teaching basics to racing beginners. Analysts such as Christina Blacker and Simon Bray are explaining some of the finer points of their horse knowledge that might be obvious to seasoned horseplayers.

“We have made some structural changes within our graphics that make things easier to understand and consume if you are a new viewer to the sport of horse racing,” Grigsby said. “At the same time, that information would still be relevant to people who have been watching and wagering TVG for 20 years.”

Although there is a small presence in TVG’s Los Angeles studio Thursdays through Sundays during NBCSN simulcasts, most races are anchored from the homes of the on-air personalities whose surroundings range from living rooms and studies to, in Joyce’s case, a lush back yard.

“That didn’t happen overnight,” Grigsby said. “It has been a tough transition to get to that point. We are overly cautious and more safe than most. Given that we have come up with the work-at-home solution, we are in no hurry to shove people back into the studio environment.”

One twist that TVG added was Blacker’s reporting position at Santa Anita. Taking a page from British coverage of Royal Ascot, Blacker is positioned far from the finish line, in her case on property adjacent to the track at the end of the backstretch. It gives her a chance to ask jockeys questions as they ride their horses to the gate.

Fox is back home at Belmont


After originating a springtime full of shows with hosts in the XBTV studios at Santa Anita, the Fox Sports racing telecasts will originate now from Belmont Park before moving to Saratoga this summer.

"Now that they’re back to racing at Belmont, we will have some essential people on track,” said Allevato, who commutes from his California home every week to produce the Fox Sports telecasts from New York. “We will be practicing social distancing and guidelines, and we’ll do the shows from there.”

Aside from having dibs on NYRA tracks and Churchill Downs, the FS1 and FS2 telecasts distinguish themselves with a distinct, studio look led by hosts Greg Wolf and Acacia Courtney and analysts Andy Serling, Maggie Wolfendale Morley and Richard Migliore. Trainer Tom Amoss and horseplayer Jonathon Kinchen will provide analysis from their homes in Kentucky and Texas. Laffit Pincay III and Hall of Fame jockey Gary Stevens will stay in Los Angeles but return to the telecasts this summer at Saratoga.

“We go into every show trying to accomplish three things – educate, inform and entertain,” Allevato said. “That’s our motto.”

That also means that viewers used to seeing races come in rapid-fire fashion on TVG are finding that there are fewer of them on Fox Sports, what with only two racetracks now as a centerpiece. There is also more dialogue in between.

“We go for a quality over quantity and the ability to try and tell stories,” Allevato said. “We want people who watch the shows – whether they’re a first-time bettor or if they’re somebody who’s been betting for a long time – to come away hopefully feeling a little bit smarter or feeling like they have a little bit of an edge by watching what we’re doing.”

Allevato used Wolfendale Morley as an example of someone who can provide teaching moments that might set the Fox Sports shows apart.

“She can look at a horse in the paddock and tell me that it has a turf hoof and not a dirt hoof and that that is worth remembering the next time the horse is on the turf. Things that I can’t get even after all these decades of reading the racing form that I can learn from her.”

The biggest challenge that the pandemic presented to Allevato’s team was a sudden move in late March when Aqueduct Racetrack was turned into a stand-by hospital. That forced the NYRA TV production staff to quickly haul out all its equipment.

“We had to literally move our entire production facility and trucks and everything to Belmont Park in a span of a couple days,” said Allevato, a former TVG executive who has televised horse races since 1993. “This made a difficult situation even more difficult. When we did that, we started having the talent go do their shows from home. There was an obvious drop-off in the production value, but I believe that the viewers were a little more forgiving at this time and understanding of what everyone was trying to do.”

But about that long ... delay


Another generation may look back on 2020 and wonder how we had the patience to deal with that “eternity” that Allevato referenced.

“One announcer asks the other a question, and there’s just that two-second delay or whatever,” he said. “That has been one of the biggest challenges of doing these shows from all the different locations that we use.”

It might seem like a new phenomenon. But Grigsby and the TVG team have been dealing with it for a long time. Consider how horseplayers consume races.

“Latency is something that we have always tried to combat given that people bet so close to the start of the race,” Grigsby said. “We have invested in technology that has tried to knock that latency down as much as possible. We think we have done a pretty good job.”

Both Grigsby and Allevato said the delay is more noticeable when announcers at home or in a studio far from the production hub are trying to explain a replay, especially when there is an objection or an inquiry.

“You want your announcers to be able to talk about pictures that are in sync when going about their narrative,” Grigsby said.

“When you’ve got someone like Gary Stevens, who has tremendous insights doing a post-race analysis, and we’re showing a replay, he’s three seconds behind the video,” Allevato said. “It’s really difficult for him to describe to the viewer in real time what’s happening. It’s just natural for him to say ‘you see it right there.’ Well, ‘right there’ was three seconds ago. That’s one of the advantages of having the team back together in New York. They are seeing the replays in real time.”

Grigsby believes that TVG has an edge, having worked for years with racetracks that distribute their live race video via internet protocol.

“It has been an important initiative of ours for many, many years, not just during this 10-week period,” he said. “We’re working on it every day.”

As difficult as it has been for the rival production teams to put together television shows and reinvent their way of doing business this spring, they seem to be developing routines that have created new comfort zones for their viewers.

“It’s a really interesting and challenging time,” Allevato said. “But we looked at it as a chance to really give people a break from all the insanity that was going on in the world and deliver a little bit of normalcy to them with some horse-racing programming.”

“Whether it’s Monday or Tuesday at tracks like Fonner Park or graded-stakes action on the weekends,” Grigsby said, “we’re just a dedicated group of employees who are here for the sport. That’s what we are at our core.”

Ron Flatter has covered horse racing around the world for more than 30 years. Currently based in Nevada and working for the Vegas Stats & Information Network, he is host of the weekly Ron Flatter Racing Pod and on Twitter @ronflatter.