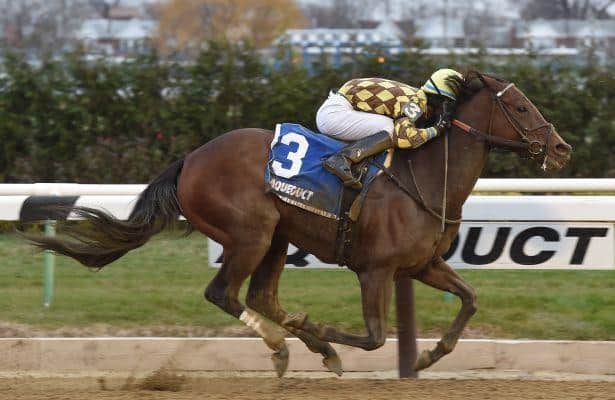 William C. Schettine's Isabelle overtook Jules N Rome in the stretch and gained separation in the final furlong to win the $100,000 Bay Ridge for New York-bred fillies and mares 3-years-old and up on the inner dirt track Sunday at Aqueduct Racetrack.

Isabelle, who won for the first time in nine starts to find the winner's circle for first time in 2016, captured her first stakes win since the 2015 Broadway for Hall of Fame trainer Bill Mott, completing the 1 1/16 mile-course in 1:47.16.

Isabelle stalked the pace as Jules N Rome lead the eight-horse field through an opening quarter-mile in 24.79 seconds and the half in 49.43. Jockey Kendrick Carmouche then piloted Isabelle near the rail, where the 5-year-old bay mare took the lead from the inside and fended off 2-1 favorite Super Surprise's late challenge to win by 5 ½ lengths.

"It was a smooth trip," Carmouche said. "I was sitting at the half-mile [pole] and I reached and grabbed her again and I was just looking for a spot. As soon as I saw Junior's [Alvarado] horse, [Jules N Rome] getting out when she switched leads, I planted myself back to the rail and just waited for the rail to open. It opened and made me look like a hero today."

"Heading into the race it looked like there was some outside speed and she's shown some speed in her other races going long, but Kendrick got absolutely a perfect trip," said Riley Mott, an assistant to his father. "He got her nice and relaxed and obviously came up the inside and she was loaded on the turn for home. It was good performance for the jockey and the filly."

Isabelle improved to 3-2-0 in seven career starts at the Big A.

"She's maybe a horse for the course, she loves the inner track and it's nice to see her comeback and make a performance like that," said Riley Mott. "She's maybe had a few races that weren't like she had run before but we were thrilled with today."

Kathy's Humor came in third for trainer Rick Violette, finishing on the board for the first time in a stakes start.

Jockey gets her 1st Saratoga win on filly trained by her dad
A win at Saratoga is always nice for a jockey. The...
x