Isabella Sings Leads the Way in My Charmer Handicap 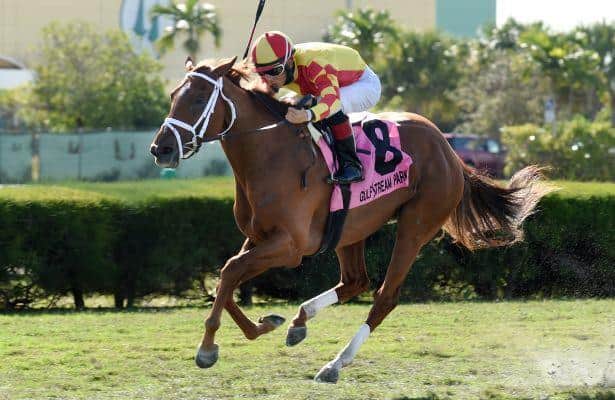 In concert with meet-leading rider Edgard Zayas, aboard for the first time, Siena Farm homebred Isabella Sings led every step of the way to register a front-running 1 ¾-length victory in Saturday’s $100,000 My Charmer Handicap (G3) at Gulfstream Park West.

The 38th running of the 1 1/16-mile My Charmer for fillies and mares 3 and up was the second of three stakes and first of two graded stakes on an 11-race program that highlighted closing weekend of the Fall Turf Festival Meet. Gulfstream Park opens its Championship Meet Dec. 3.

“We thought that she was going to take the lead comfortably and she did what we expected her to do, so we’re pretty happy,” said Juan Tovar, South Florida-based assistant to winning trainer Todd Pletcher. “On paper it looked like we were the speed, so I told Edgard, ‘If anybody comes up to you don’t try to fight her. Let her do her race.’”

Isabella Sings remained in command turning for home as Artesian, the lone 3-year-old filly in the group, began to drop back and Sea Coast, one of two horses trained by Christophe Clement, began to launch her bid between horses. A 4-year-old daughter of Eskendereya, Isabella Sings completed the distance in 1:41.52 over a firm turf course.

“It went just like we planned. Todd said to just let her run,” Zayas said. “Last time they took hold of her a little and she doesn’t like that. She’s a free runner. I just put the hands down and let her do her own thing. I was waiting for one of Clement’s horses to finish strong, but she relaxed a little bit the first quarter so I was really confident that she’d give me a kick at the end.”

Sea Coast stayed up for second, with 17-1 long shot Dad’s Princess third. It was another length back to Clement-trained Stormy Victoria in fourth, while multiple graded stakes winner Strike Charmer never got in contention from the rail post and wound up fifth.

Isabella Sings won the Mrs. Revere (G2) last fall at Churchill Downs and the Eatontown (G3) June 25 at Monmouth Park. She followed up fading to eighth after setting the pace in the Diana (G1) and was placed third after finishing fourth as the favorite in a tightly run Violet (G3) Sept. 10 at Monmouth, her previous start.

“She’s a nice filly and the whole team is happy she got the win,” Tovar said. “We’ll see what the next step will be. We’re looking forward with her.”

After getting squeezed out of the gate from Post 4, Rainbow Heir ($6.40) settled near the back of the eight-horse field before moving to save ground along the hedge as 40-1 long shot Zeus Odin rocketed through a quarter-mile in 21.50 seconds.

Summation Time got off slowly but soon found himself in a stalking spot on the inside, taking over the lead through a half-mile in 44.70 seconds. Jockey Trevor McCarthy swung Rainbow Heir outside as the field approached the stretch and they steadily gained on the leader and sprinted past to hit the wire in 56.12 over the firm turf course.

Summation Time was a clear second, 5 ¾ lengths ahead of late-running El Deal, who edged Beantown Saint by a neck for third.

It was the second win from four starts this year and first in three career tries on grass for the Jason Servis-trained Rainbow Heir, a 6-year-old son of Wildcat Heir who won the off-the-turf Wolf Hill Stakes by 7 ¾ lengths July 10 at Monmouth Park. Beaten a neck in the Aug. 20 Troy Stakes over the Saratoga turf, he was third in the Hall Of Fame Sept. 17 at Parx in his previous start.