With full field for Pegasus, outside posts could be dicey 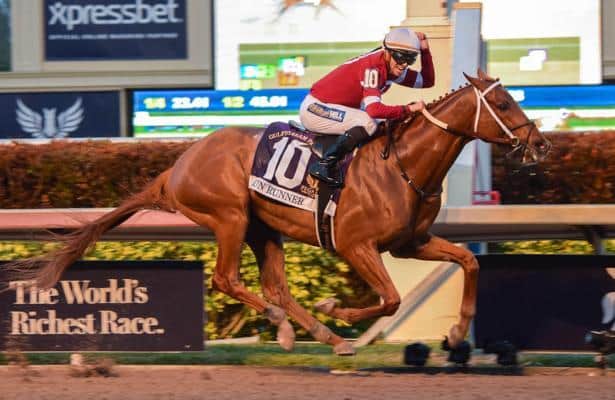 With 12 invitees and a pair of also-eligibles, the Grade 1, $3 million Pegasus World Cup is likely to have a full field lined up on Jan. 23.

Gulfstream Park has built a reputation over the years as a track that favors inside post draws in route races more than typical tracks, mainly because of a short run-up into the first turn.

Mucho Gusto, whose resume was much closer to this year's main contenders than the three horses listed above, drew post No. 10 when winning last year's Pegasus, but he broke from post No. 8 after two key scratches leading up to the race.

Is being drawn outside at Gulfstream Park such an albatross that it takes a superstar to win? If so, how far outside is simply too far outside to bet on? For the answers to these questions, we take a look at recent post position statistics from Gulfstream Park below to see the percentage of starts each post wins when active.

Posts 1 through 6 were the only posts that have resulted in win percentages above 10 percent in each of the four samples. It is true that the farther inside a runner is, the better off they are as posts 1 through 3 have consistently been the most effective.

While posts 7 and 8 have not been quite as good, the results show that the right runners can win without much hinderance.

Post 10 has been consistently below average, while post 11 closely resembles post 9 when one high outlier, but mostly poor results. Posts 12 through 14 have been completely blanked during these samples.

If likely favorite Knicks Go draws an outside post with his tactical speed and immense ability, he might be able to work out a decent trip, but he would have to be much the best to win as Big Brown, Barbaro and Gun Runner were at Gulfstream.

Any other Pegasus hopefuls who draw the outside can safely be downgraded in all wagers.

Below is a look at the 2019 Pegasus World Cup, the last time there was a 12-horse field. City of Light, post 3, Seeking the Soul, post 4, Accelerate, post 5, and Bravazo, post 1, completed an all-inside Superfecta.

Look closely at the three outside runners, Patternofrecognition, Imperative and Audible. Their riders give perfect examples in this race of the three options from a wide draw, and none of them are ideal.

Patternofrecognition gunned it out of post 12 to get over on the first turn. He made the lead, but had to go fast to do so and was essentially eased out of the race before the final turn.

Imperative was taken far back from post 11 to try to save ground, but never looked comfortable while far out of it.

Audible was caught in between the two styles and was forced to go very wide on the first turn. He lost plenty of ground and wound up a disappointing fifth from post 10.