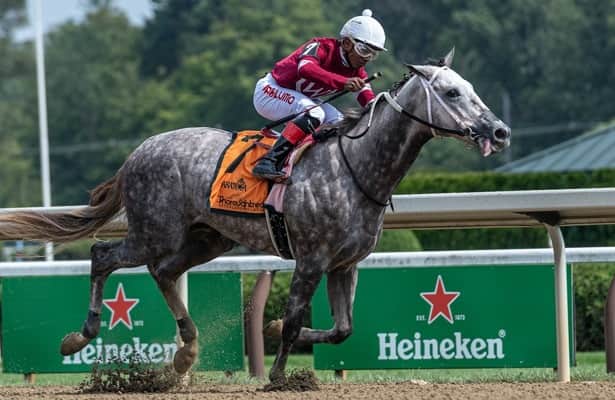 The Road to the 2022 Kentucky Derby begins Saturday night under the Twin Spires.

The Iroquois is the first official prep race toward next May’s Kentucky Derby, paying out qualifying points on a 10-4-2-1 scale. No winner of this event has ever gone on to take the Run for the Roses, however.

A “win and you’re in” berth into the Breeders’ Cup Juvenile is also on the line in the Iroquois Stakes. This is the first of four qualifiers for that event, with the American Pharoah Stakes (G1), Champagne Stakes (G1) and Breeders’ Futurity (G1) to follow in coming weeks.

No matter how Stellar Tap runs in the Iroquois or beyond, he will always hold a special place in the career of trainer Steve Asmussen. The Tapit colt scored on debut last month at Saratoga, earning Asmussen career victory No. 9,446 – most all-time among North American trainers.

Asmussen now shows 9,488 victories on his ledger, including three in the Iroquois Stakes. He will give jockey Ricardo Santana Jr. a leg up Saturday on Stellar Tap, who won by 5¼ lengths in his first start.

Major General (4-1) was another Saratoga debut winner, scoring by a neck at Saratoga over fellow Iroquois starter Bourbon Heist (9-2). The Constitution colt makes his stakes debut for trainer Todd Pletcher.

Another well-regarded Asmussen runner is Guntown (9-2), son of first-crop sire and 2017 Horse of the Year Gun Runner. After a third-place finish on debut at Ellis Park, he won there at a mile on second asking.

Fans wanting to watch the Iroquois and the rest of Churchill’s stakes will have to do so online. The Louisville, Ky., track’s action typically airs on Fox Sports “America’s Day at the Races” telecasts, but FS1 and FS2 are booked up Saturday night with college football coverage.

Here is the field for the 2021 Iroquois Stakes (trainer and jockey in parentheses) with morning line odds:

TimeformUS’ pace projections show favorite Stellar Tap going out to an early lead under Santana, followed by Major General. The pace projects as a fast one.

Laurie Ross analyzes all 11 runners in the Iroquois Stakes field, picking who to bet and who to toss.

Trainer Steve Asmussen holds a strong hand in the Iroquois as trainer of both Guntown and Stellar Tap.

For audio analysis of weekend stakes action, check out the Who’s Got Action Pod and the Ron Flatter Racing Pod.

Here is a look at some of the other stakes races taking place Saturday across North America. All times are EDT.

Merveilleux (8-5), a two-time Woodbine stakes winner, looks to make the grade here for trainer Kevin Attard. The 4-year-old Paynter filly has not won in 2021 and finished third last out in the local Dance Smartly Stakes (G2). Jockey Rafael Hernandez gets the call. Trained by Christophe Clement, La Dragontea (9-5) owns a pair of allowance victories this year on the New York Racing Association circuit, including last month at Saratoga.

Jalen Journey (7-5) carries the momentum from a Saratoga allowance win last month into the DeFrancis Dash, the highlight of a four-stakes Laurel Park card. Steve Asmussen trains the 6-year-old, who makes his first North American graded stakes start since the 2019 Pat O’Brien Stakes (G2) at Del Mar. Jockey Feargal Lynch rides the With Distinction ridgling. Trainer Brittany Russell’s Wondrwherecraigis (8-5) enters off back-to-back wins, including the Tale of the Cat Stakes last out at Saratoga.

Higher Truth (3-1) hit the board in the first two legs of the female division of the New York Racing Association’s Turf Triple Series, finishing third in the Belmont Oaks Invitational Stakes (G1) and second in the Saratoga Oaks Invitational Stakes (G3). Now the Chad Brown-trained filly looks to break through for her first stakes victory. Jockey Jose Ortiz rides the daughter of Galileo. Brown also trains Shantisara (7-2), who enters off a victory in Arlington’s Pucker Up Stakes (G3).

Walton Street (8-5) makes his North American debut Saturday in the Canadian International, which returns to the racing calendar after not running in 2020. The 7-year-old Cape Cross gelding won a Group 2 stakes earlier this year in the Middle East for trainer Charles Appleby. Decorated European jockey Franke Dettori has won this event three times and tries for a fourth aboard the morning line favorite. Desert Encounter (3-1) won the Canadian International in both 2018 and ’19 and returns as a 9-year-old for trainer David Simcock.

Raging Bull (2-1) has won Grade 1 events each of the last three years and looks for a fourth career top-level triumph in the Woodbine Mile. The 6-year-old son of Dark Angel won Keeneland’s Maker’s Mark Mile Stakes (G1) in April but was sixth at Saratoga last month in the Fourstardave Handicap (G1). Dettori rides the Brown trainee in this Breeders’ Cup Mile qualifier. Set Piece (5-2) won Churchill Downs’ Wise Dan Stakes (G2) in June for trainer Brad Cox before running second in the Fourstardave.

Ontheonesandtwos (5-2) is favored for the Pocahontas, which both kicks off the Road to the 2022 Kentucky Oaks and awards its winner a Breeders’ Cup Juvenile Fillies berth. Norm Casse trains the Jimmy Creed filly, who was second in Churchill’s Debutante Stakes in June before running sixth last month at Saratoga in the Adirondack Stakes (G2). Jockey Ricardo Santana Jr. has the mount. Hidden Connection (9-2) was a debut winner last month at Colonial Downs for trainer Bret Calhoun and stretches out here from 5½ furlongs to 8½.

Shedaresthedevil (4-5) preps for the Breeders’ Cup Distaff here over a track where she has enjoyed great success. The 4-year-old is 4-for-4 at Churchill, including Grade 1 scores in the 2020 Kentucky Oaks and 2021 La Troienne Stakes. Jockey Florent Geroux rides the Daredevil filly for Cox. Trainer Kenny McPeek’s Envoutante (2-1) was second to Shedaresthedevil in the La Troienne, then was third under the Twin Spires in June’s Fleur de Lis Stakes (G2).