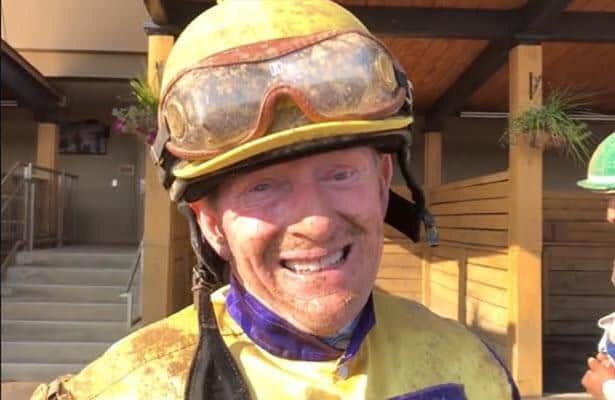 That would be rather unremarkable if he was not a jockey who ranks seventh all-time with 7,084 victories through the weekend and who continues to compete at a startlingly high level.

He has been described as being “tougher than a nickel steak,” and he proved it once more on June 26 by leaving far younger rivals in his wake as part of a five-win day at Belterra Park, formerly known as River Downs.

“I work hard at it. I don’t play around just to say I’m a jockey still riding at 66,” Ouzts said. “I work out every day and get on a lot of horses every morning. I stay at it.”

The Arkansas native has maintained the same unrelenting approach since he reached the winner’s circle for the first time in March, 1973 at Beulah Park. He would go on to capture 11 riding titles at the Columbus, Ohio, track. He topped the standings a record 18 times at River Downs in Cincinnati.

The rush of hitting the finish line first has never waned.

“The winning part of the racing, that’s what gives me the biggest thrill of anything,” Ouzts said. “There’s nothing in life I ever got that kind of thrill out of. I’ve been blessed to do it over 7,000 times and I get the same thrill every time, no matter if it’s the cheapest race of the day or the biggest stake.”

He describes himself as a “speed junkie.” He yearns to feel the wind rushing against his face whether it be on the back of a half-ton Thoroughbred, on a motorcycle or behind the wheel of his two-seat Mercedes sports car that can all but fly at 155 miles per hour.

All of these, of course, come with considerable risk that he readily accepts.

Take, for instance, his most serious misadventure with his motorcycle. In 2012, he was zipping along at 70 miles per hour or so in the middle lane of three-lane interstate 275, not far from Cincinnati. The driver of a car in the right lane apparently never saw him as that driver moved to his left. Ouzts could do nothing to prevent the crash. His motorcycle went skittering down the highway.

Ouzts immediately knew what to do. “It was kind of like taking a spill in a race,” he said. “I just tucked and rolled.”

Remarkably, he was uninjured.

“I wiggled everything to make sure everything was still working,”’ Ouzts said. “Didn’t really raise my heart rate. That was kind of shocking. Usually you have an adrenaline rush after something like that. I just got lucky that I tucked and rolled. I didn’t have my arms and legs flopping everywhere.”

He declined an offer of medical assistance. He instead called Jamie Fowler, his agent for the last 34 years, to give him a lift to River Downs. Neither ever considered that he would not keep to his assignments that afternoon.

“You need to ride if you want to eat,” Fowler said. “We ain’t football players with contracts.”

Ouzts handled the motorcycle accident with such aplomb because he has endured so many spills while on horseback. He was not able to wiggle everything after some of those.

In 2006 at Turfway Park, there was nothing he could do to avoid serious harm when Finders Chance came to an abrupt halt at the quarter pole, throwing him to the Polytrack surface.

He suffered four cracked vertebrae, one crushed vertebra and a broken arm.Four surgeries and 11 months later, he was back in the saddle.

The lofty victory total, the riding titles and the grit that led Ouzts to be the subject of a 2015 documentary entitled “Ironman Perry Ouzts,” all lead Fowler to argue that his client deserves a place among racing’s greats.

Ouzts goes about making his case every day, even as he hears the clock ticking loudly. His goal is to pass Chris McCarron’s total of 7,141 victories to move into sixth place in history.

“Any time after that,” he said, “I’ll say, ‘I’ve done about all I can do.’ “
There would still be that souped-up Mercedes – not that he would ever think of maxing out at 155 miles per hour.

Division Rankings: Swiss Skydiver set to seize throne
I apologize in advance to all Monomoy Girl fans, a...