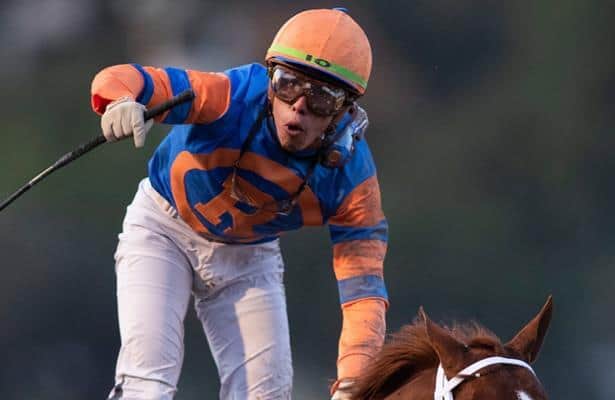 Ortiz was suspended by New York stewards for an aggressive ride in a Dec. 3 claiming race at Aqueduct and his nose victory on Dec. 4 aboard Mo Donegal in the Remsen Stakes (G2).

In the claiming race, Ortiz, riding Gran Casique, angled in several paths to make contact with Ragtime Blues, who was ridden along the rail by Omar Hernández Moreno. It appeared Ortiz turned his head to look at Hernández Moreno, who fell to the track while Ragtime Blues kept running. Neither the fallen rider nor the horse was hurt badly.

Ortiz and Gran Casique were disqualified from their runner-up finish and placed last among the seven finishers.

In the Remsen Stakes, a points prep for the Kentucky Derby, Ortiz used a left-handed crop in the face of runner-up Zandon, with whom Mo Donegal made contact in the deep stretch. It took about 10 minutes before stewards let the result stand.

Even with the suspension, Ortiz' 336 wins last year led all North American jockeys. His $29.3 million in earnings was second behind Joel Rosario.