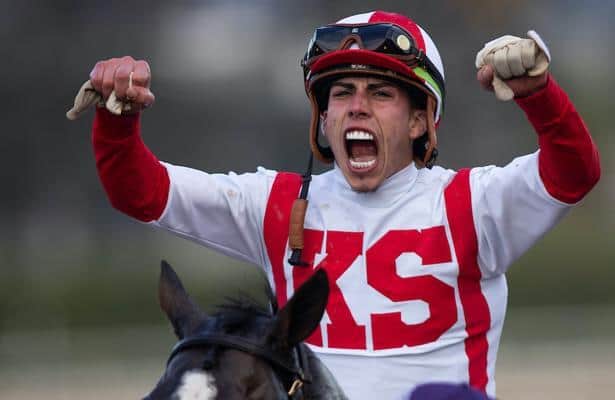 Co-owned by trainer Rudy Rodriguez with Parkland Thoroughbreds, Saratoga Kisses was in front at the half-mile call of the six-furlong maiden claiming sprint for New York-bred juvenile fillies and widened her margin impressively en route to an 8 1/4-length score.

"It's very exciting,” said Ortiz, who is currently 15th on the all-time earnings list, amassing more than $220 million in purses in a career that started in 2011. “I have to thank all the owners and connections and trainers who have supported me from day one. Without them, none of this would be possible.”

According to records provided by Equibase, his 3,000 victories include 92 wins from the 29-year-old rider’s homeland of Puerto Rico.

Ortiz has enjoyed tremendous success on the New York Racing Association circuit, winning the year-end title on three occasions (2014, 2015 and 2017).

"I'm very competitive," Ortiz said. "I love what I do. I come here and (try] to ride every race, every single day because that's what I love."

Since starting his career in 2011, Ortiz has never won fewer than 150 races in a year and is on pace to crack the 300-win mark for the seventh consecutive campaign in 2021. He has topped all North American jockeys in both wins and earnings in every year since 2017.

Among his most famous victories over Big Sandy was aboard Creator when securing a dramatic nose score in the 2016 Belmont Stakes for his lone win in a Triple Crown race.

The veteran rider has flaunted his talent at racetracks across the continent at the highest level, posting 203 career graded-stakes wins, including 60 Grade 1 victories. Ortiz boasts 11 Breeders’ Cup wins, including a score in the 2019 Classic aboard Vino Rosso at Santa Anita Park.

Ortiz has made an impact beyond his success on the track. He also has been active in assisting the backstretch community in New York, especially during the last two years as the COVID-19 pandemic necessitated the need for additional support and supplies.

In July, he was honored by the New York Race Track Chaplaincy for his generous and continued devotion to the backstretch community at its “Champions Talk” fundraiser, joining a select list of honorees who in the past have included Hall of Fame rider Edgar Prado, owner Michael Dubb and philanthropists and Saratoga icons Marylou Whitney and John Hendrickson.

“He’s just a heck of a guy,” said Humberto Chavez, who heads the New York division of the Race Track Chaplaincy of America. “He’s always looking to make sure that the people who take care of the horses he rides are also being taken care of as well. He really bonds with them.”