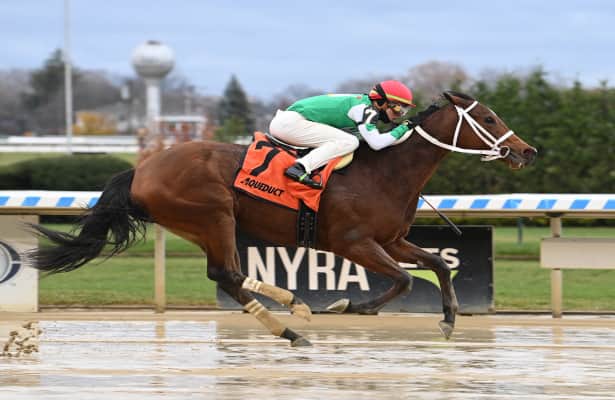 Jockey Irad Ortiz Jr. secured a record 77th stakes win in a single season in North America when he guided Dr B to an easy victory in the Grade 3, $200,000 Go for Wand for fillies and mares 3-years-old and up on Saturday at Aqueduct Racetrack.

The win, which surpassed the record of 76 set in 2007 by the late Hall of Famer Garrett Gomez, was never really in doubt. Dr Br broke on top and had the race sewn up in a matter of strides en route to a 4 1/4-length victory over a sloppy and sealed track in a final time of 1:35.18 for the one-mile distance.

“This is great. Amazing feeling,” said Ortiz, Jr., who won the Eclipse Award as Outstanding Jockey from 2018-20. “It’s amazing just to be a part of the story. (Garrett) Gomez did it in 2007 and he was a great rider, one of the best in the game. I’m so happy just to be a part of this. I love this sport. Thanks to everyone who has supported me; trainers, owners and my agent Steve Rushing.

“The speed has been playing well the past couple of days,” he added of his trip aboard Dr B. “She broke well. She had been sprinting before and I didn’t want to take anything away. I just let her be herself and she was nice and relaxed. When I asked her, she was there for me.”

.@iradortiz sets the record for single-year stakes wins in the Go For Wand (G3) with DR B!!! #TheBigA pic.twitter.com/rZftldTHYj

“This (graded-stakes record) is something that I didn’t even know until a week before the Breeders’ Cup,” said Ortiz. “I never tried to pay too much attention, I just ride and try to keep winning and whatever happens at the end of the year, we’ll see how it goes. Thank God the last couple of years have been great.”

To her credit, Dr B continued her steady ascent up the ranks with an authoritative win in the Go for Wand for trainer Butch Reid, Jr. and owners Cash is King and LC Racing. Last year, the bay filly finished second in an off-the-turf running of the Blue Sparkler at Monmouth Park and picked up a couple minor awards in a pair of second-level allowance races in the mid-Atlantic, but failed to really distinguish herself as a top sophomore.

That changed in a hurry when she won her 4-year-old debut on June 11 at Parx Racing and two starts later finished second to eventual Breeders’ Cup Filly and Mare Sprint winner Goodnight Olive at Saratoga. After another victory at Parx and a pair of seconds against ungraded competition, Dr B finally netted her first stakes win on Saturday with Ortiz aboard for the initial time.

“We love that New York money and it’s worth that trip up the turnpike,” said Reid. “I didn’t know if she’d maintain the fractions; I was a little surprised she was on the lead, but she broke so sharp. She’s got a bit of a tender mouth on her and Irad just did a tremendous job and let her do her thing."

“It was fun,” Reid said of Ortiz's record-breaking win. “I didn’t even realize that we got 76 for him out at Mahoning Valley [with Disco Ebo in the Youngstown Oaks] and we got 77 for him today.”