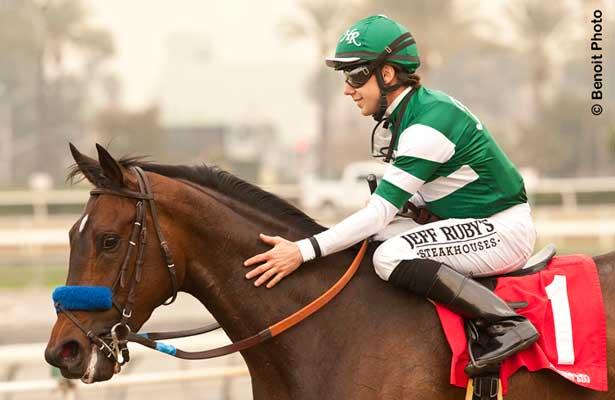 Coming off a brilliant victory in Santa Anita’s Vanity Stakes which she won by more than ten lengths, classy and consistent Iotapa will be attempting to build on her reputatation  Saturday when she leads a strong field of seven older fillies and mares in the 44th running of the $300,000 Clement L. Hirsch Stakes at Del Mar.

Iotapa, a daughter of Afleet Alex trained by John Sadler, went to the front from the gate in the Vanity under jockey Joe Talamo and never gave her rivals a chance in the Grade I event, receiving a Beyer Speed Figure of 109 in the process.

In eleven career outings, the four-year-old filly has been worse than third only once, while winning five times with earnings of more than $600,000. Last winter, she won the Santa Maria at Santa Anita.

Iotapa is one of three hopefuls Sadler will send out in the Hirsch,  the trainer also sending out stakes-winning More Chocolate, runner-up to Lady of Fifty in the 2013 Hirsch, and Legacy, a stakes-winner at the recent Los Alamitos meet.

Hall of Fame trainer Jerry Hollendorfer also has a formidable  trio in the Hirsch – Broken Sword, winner of the Bayakoa at Betfair Hollywood Park last December; multi stakes-winning Doinghardtimeagain, victress in the Great Lady M at Los Alamitos recently, and  six-time stakes-winning Parranda, trying a synthetic surface for the first time after winning ten of 23 races on grass in her career, including the Grade II Royal Heroine a month ago at Santa Anita.

Rounding out the field and a potent threat off her best performance is Fiftyshadesofhay from the barn of trainer Bob Baffert. The Pulpit filly won the Grade II Ruffian at Belmont Park in May prior to running third behind Molly Morgan in the Fleur de Lis at Churchill Downs.

The Hirsch Stakes, which honors the memory of one of the original directors of the Del Mar Thoroughbred Club, is part of the Breeders’ Cup’s series of “Win and You’re In” qualifying races where the winner’s  entry fees will be paid for the Breeders’ Cup Distaff  at Santa Anita.

Post time for the first of ten races Saturday will be 2 p.m.