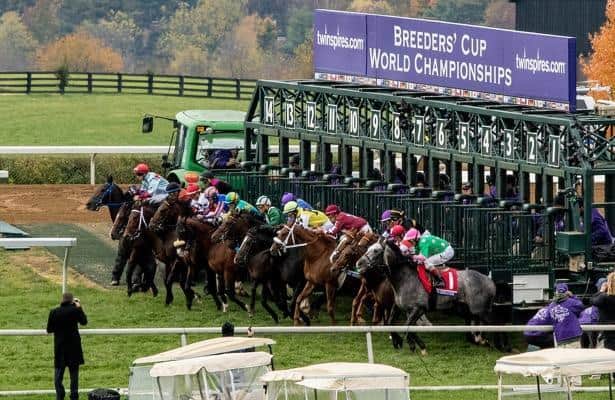 A handful of international trainers are throwing their hats into the Breeders’ Cup ring, a group joined most recently by Marsha, a filly who earned automatic qualification to the $1 million Turf Sprint and figures as the top challenger for expected favorite Lady Aurelia.

According to IrishRacing.com, Marsha’s racing manager said, “The plan is to head to America,” where travel expenses are paid by way of her victory over Lady Aurelia in the Nunthorpe Stakes at York.

Last time out, the 4-year-old ran 2nd in the Prix de l'Abbaye at Chantilly — and she’ll put a pause on heading to the breeding shed to run in North America’s championships at Del Mar.

Also expected in California for the Nov. 3-4 races are a pair of Juvenile Turf contenders from Europe.

Best known for his jump racing feats, trainer Gordon Elliott is aiming at a Breeders’ Cup title with Beckford in the $1 million race. Elliott has already trained winners of the Grand National and the Cheltenham Gold Cup in Europe, but now a Grade I title stateside is the goal, the Racing Post reported this week.

Beckford won the Group II Railway Stakes at the Curragh before two Group I runner-up efforts in the Phoenix Stakes and the Vincent O’Brien National Stakes. The 2-year-old colt was 5th last out in the Group 1 Middle Park Stakes at Newmarket.

“The plan is to go for the Breeders’ Cup Juvenile Turf, and he’s come out of Newmarket in good form,” Elliott told the Racing Post. “I’m very happy with him, and he’s a little bull of a horse.

“He just ran a bit flat at Newmarket. Whether it was one too many a run in a short space of time, I don’t know, but I plan on freshening him up before we travel to America.”

Trainer Richard Spencer is also making big plans for his 2-year-old colt, Rajasinghe. After winning the Group II Coventry Stakes at Royal Ascot, Rajasinghe followed that effort with a 3rd in the Group II July Stakes and finished 11th behind Beckford in the Middle Park Stakes.

“Rajasinghe never really travelled in the Middle Park, which was a combination of not loving the [good to soft] ground and the undulations,” Spencer said to the Racing Post.

“It was quick when he won at Royal Ascot and I'm sure it will be at Del Mar, so we're having a crack at the Juvenile Turf. He's never raced beyond six furlongs but the sharp track over there should help him.”