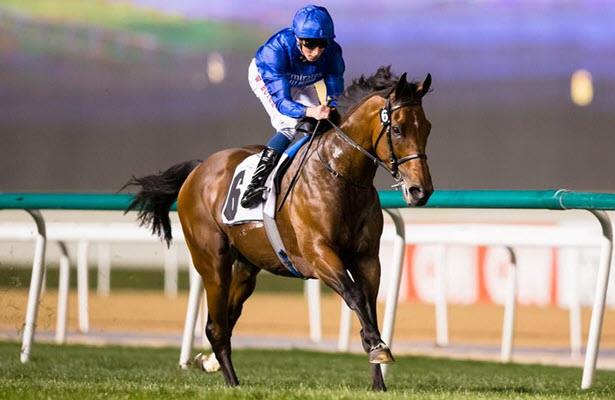 Germany, France, and England will all host Group 1 races during the coming week, with the most significant action taking place at York. The Juddmonte International (G1) and Yorkshire Oaks (G1) — “Win and You’re In” qualifiers for the Breeders’ Cup Classic (G1), and Filly & Mare Turf (G1), respectively — are among the major races slated to be held over the historic British course.

Let’s highlight half a dozen of the most important races to follow on the international scene:

Godolphin’s globetrotting star Barney Roy figures to start as a clear favorite in this 1 1/2-mile Group 1 test, even though he’s never tackled such an extended distance before. Winner of the 2017 St. James’s Palace Stakes (G1) racing a mile at Royal Ascot, Barney Roy has enjoyed a career renaissance at the age of six, nabbing the Jebel Hatta (G1) in Dubai and finishing third in Royal Ascot’s Prince of Wales’s Stakes (G1) before traveling to Germany and battling to victory in the Grosser Dallmayr-Preis (G1) at Munich.

Barney Roy can add another feather to his decorated cap in the Preis von Europa, though his pet distance these days is clearly 1 1/4 miles. If he stumbles over the longer journey at Cologne, Princess of Wales’s Stakes (G2) winner Dame Malliot or Grand Prix de Saint-Cloud (G1) runner-up Nagano Gold can pick up the pieces, since both have demonstrated high-class form racing 1 1/2 miles.

Two of the most accomplished 3-year-olds in France will square off in this 1 1/4-mile Group 2 test. Godolphin’s locally-based Poule d’Essai des Poulains (G1, French 2,000 Guineas) winner Victor Ludorum is virtually equal in the early betting with Mishriff, a John Gosden trainee who shipped in and finished two lengths clear of Victor Ludorum in the 1 5/16-mile Prix du Jockey Club (G1, French Derby).

The Summit finished between Mishriff and Victor Ludorum in the Prix du Jockey Club, but bettors have been keen to favor the classic winners over all others, and both are currently trading at 5-4 among British bookmakers. We’ll see if favoritism swings toward Mishriff as post time approaches; the fact popular jockey Frankie Dettori will climb aboard is bound to attract support.

Seven horses have been entered to contest this 1 1/4-mile journey, but only one is receiving any significant support from bettors. Sottsass, winner of the 2019 Prix du Jockey Club (G1) and third in last year’s Prix de l’Arc de Triomphe (G1), is an overwhelming favorite to add this Group 3 test to his glowing resume.

The French-bred colt arrives at Deauville in strong form, having battle to victory by a head over next-out Group 1 winner Way to Paris in the 1 5/16-mile Prix Ganay (G1) at Chantilly last month. With a return trip to the Arc de Triomphe looming as Sottsass’ ultimate goal for the season, the Prix Gountaut-Biron Hong Kong Jockey Club should be a straightforward steppingstone toward the first Sunday in October.

No matter how you slice it, the Prix Jacques le Marois is shaping up to be one of the deepest and most competitive turf miles held anywhere in the world this year. The betting favorite is the undefeated Palace Pier, a 3-year-old son of sensational miler Kingman. Racing for John Gosden and Frankie Dettori, Palace Pier has gone 4-for-4 so far, most recently rolling to victory in the Saint James’s Palace Stakes (G1) at Royal Ascot while earning an impressive 124 Racing Post Rating.

But Palace Pier is far from the only Group 1 winner in the Prix Jacques le Marois field. He’ll be joined by French classic winner Persian King, fresh off a victory in the Prix d’Ispahan (G1)… by Circus Maximus, victorious in the Queen Anne (G1) at Royal Ascot… by Alpine Star, a dominant winner of Royal Ascot’s Coronation Stakes (G1)… and by Romanised, who nabbed a classic victory when upsetting the 2018 Irish 2,000 Guineas (G1) at 25-1. With three group stakes wins from his last four starts, Romanised is arguably in better form than ever before.

With so many top-class milers in the mix, don’t be surprised if the Prix Jacques le Marois produces a contender (or two or three) for the Nov. 7 Breeders’ Cup Mile (G1) at Keeneland.

The field for this prestigious 1 5/16-mile test of speed and stamina hasn’t been finalized yet, but judging from the early entries, it’s shaping up to be an epic race. The probable favorite is Ghaiyyath, a Godolphin runner whose 3-for-3 record this year includes a blowout front-running win over superstar Enable in the 1 1/4-mile Coral-Eclipse (G1) at Sandown.

But the early entries also include defending Juddmonte International winner Japan, the gallant 2000 Guineas (G1) winner Kameko, the decorated Group 1 winner Benbatl (who finished third in the inaugural Saudi Cup), the 2019 Epsom Derby (G1) winner Anthony Van Dyck, the runaway Prince of Wales’s (G1) winner Lord North, and the durable Aidan O’Brien-trained Group 1-winning mares Magical and Magic Wand. We’ll have to wait and see which horses ultimately face the starter, but even if a few withdraw we’ll still be left with a fantastic field.

As with the Juddmonte International, the field for the 1 1/2-mile Yorkshire Oaks has not been finalized, but the early entries suggest a deep field will line up in the starting gate. Magical is cross-entered here, but the star of the show will undoubtedly be Aidan O’Brien’s improving 3-year-old Love, who blew the doors off her rivals in both the 1000 Guineas (G1) and the Epsom Oaks (G1).

Love’s breathtaking triumph in the Yorkshire Oaks was a sight to behold, as she came rallying from off the pace to demolish Ennistymon and Frankly Darling by nine lengths. Those two could engage Love in a rematch on Thursday, with recent Nassau (G1) runner-up One Voice adding further depth to the field, but if Magical heads to the Juddmonte International, then you can bet Love will be an overwhelming favorite to add the Yorkshire Oaks to her impressive resume.