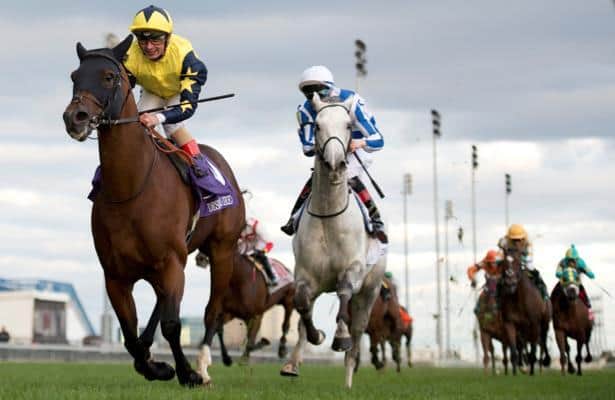 The continuation of the “Glorious Goodwood” meeting in England is the highlight on the international racing calendar this week, with established Group/Grade 1 winners Battaash and Desert Encounter among the major names in action.

Deauville in France will also offer quality racing with the Prix Rothschild (G1) on Sunday, so let’s take a tour across Europe and highlight a quartet of important events taking place this week:

There’s a reason why Battaash is an overwhelming favorite to win Friday’s King George on the penultimate day of Glorious Goodwood. The decorated 6-year-old has won the last three renewals of this five-furlong dash and enters his quest for a fourth victory in fine form, having romped to a 2 1/4-length victory in the June 16 King’s Stand (G1) at Royal Ascot.

A three-time Group 1 winner trained by Charles Hills, Battaash will face some talented rivals in the King George. Liberty Beach finished third in the King’s Stand, while Glass Slippers defeated Battaash when the latter faltered over very soft ground in the Prix de l’Abbaye de Longchamp (G1) last fall. But with regular rider Jim Crowley in the saddle, Battaash should be tough to catch over good ground in his favorite race.

Do the names Desert Encounter and Thundering Blue ring a bell? They should—back in 2018, these two talented geldings ran 1-2 in the Canadian International (G1) at Woodbine, counting North American graded stakes winners Tiz a Slam, Johnny Bear, and Spring Quality among their beaten rivals.

Since then, the aging veterans have gone their separate ways. Desert Encounter enjoyed a productive 2019 season, winning a trio of Group 3 stakes in England before nabbing a repeat victory in the Canadian International. Thundering Blue struggled while attempting to beat tougher company but has been freshened since finishing tenth in the September Stakes (G3) late last summer.

Now Desert Encounter and Thundering Blue will reunite in the 1 1/2-mile Glorious Stakes at Goodwood. Neither gelding is favored to win; that honor has gone to Communique, a two-time Group 2 winner over this distance. But encouraging efforts on Friday could very well propel Desert Encounter and Thundering Blue back to North American for graded stakes starts in late summer or fall.

Among the highlights on closing day at Goodwood is the Lillie Langtry, a 1 3/4-mile test of stamina for fillies and mares. John Gosden’s Enbihaar is expected to start as the favorite, in no small part because she dominated this race by five lengths in 2019. The 5-year-old mare is a tried-and-true stayer and kicked off 2020 with a solid fourth-place effort in the 1 1/2-mile Princess of Wale’s Stakes (G2) at Newmarket, setting up Enbihaar for a winning effort in her second run of the season.

Manuela De Vega, runner-up in the 2019 Lillie Langtry, is back for a rematch against Enbihaar and could be a live upset contender after winning the Pinnacle (G3) and Lancashire Oaks (G2) in her first two starts of 2020. But the real wildcard is Snow, a 3-year-old daughter of Galileo conditioned by Aidan O’Brien.

Although Snow failed to threaten in the Irish Oaks (G1), she was previously a comfortable winner over yielding ground in the 1 1/2-mile Munster Oaks (G3) at Cork. Stretching out over 1 3/4 miles could be right up her alley, considering her full brother Kew Gardens won the historic St. Leger (G1) over this trip and later beat superstar stayer Stradivarius in the 1 15/16-mile British Champions Long Distance Cup (G2).

With O’Brien’s top jockey Ryan Moore in the saddle, Snow could potentially spring a surprise while toting just 121 pounds, 11 to 14 pounds less than the favorites.

It’s been a few years since the popular three-time Breeders’ Cup Mile (G1) winner Goldikova managed to win four consecutive renewals of the Prix Rothschild, and while no one is yet comparing Watch Me to Goldikova, it’s possible this 4-year-old filly is sitting on a big season.

Watch Me has already proven herself against top company over the 1-mile distance of the Prix Rothschild, upsetting two-time classic winner Hermosa by 1 1/2 lengths in the 2019 Coronation Stakes (G1) at Royal Ascot. Watch Me reiterated her fondness for a mile when romping to an easy victory in Deauville’s Prix de la Calonne to kick off 2020.

Watch Me’s sire, Olympic Glory, was also a top-class miler who won a quartet of Group 1 races during his productive career. Assuming Watch Me prevails as expected in the Prix Rothschild—she’s a heavy favorite in the early betting—perhaps we’ll see her follow the path established by Goldikova and make her way to the U.S. for a tilt at the Breeders’ Cup Mile.